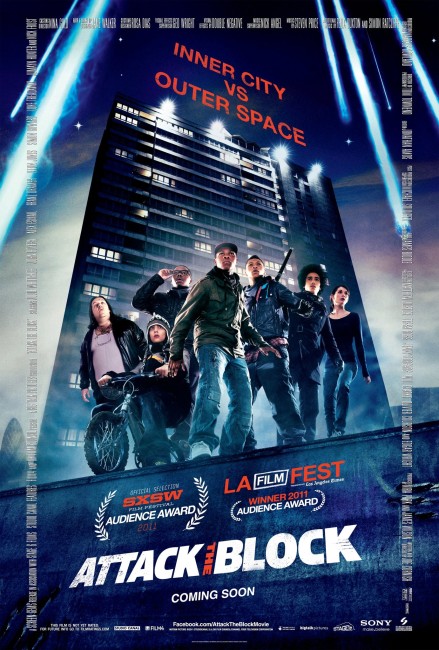 While returning home to the apartment block on the housing estate where she lives in Brixton, South London, nurse Samantha Adams is mugged at knifepoint by a group of teenage thugs. The attack is interrupted by a meteorite crashing from the sky. The group are then attacked by a creature that emerges. The teenagers track down and kill the creature and afterwards realise that it is an alien. Thinking of the money they can make from the discovery, they stash the alien’s body in the local drug dealer’s weed room. Soon however there are meteorites falling everywhere. Large black creatures with glowing teeth emerge and ferociously attack everything they encounter. The gang arm themselves with baseball bats, fireworks, knives and swords and set out to defend their territory from the aliens as they invade the apartment block.

Attack the Block is a British film that developed a small cult around the world when it came out. It was a debut feature for Joe Cornish, previously best known as a comedian with the popular British comedy skit/variety show The Adam and Joe Show (1996-2001). Cornish subsequently fell into the camp of Edgar Wright, the director of Shaun of the Dead (2004), Scott Pilgrim vs. the World (2010) and The World’s End (2013), who also executive produces Attack the Block. Elsewhere, Cornish has co-written with Wright the script for Steven Spielberg’s The Adventures of Tintin (2011) and Marvel Comics’ Ant-Man (2015).

In interviews, Joe Cornish explained that he conceived Attack the Block after growing up in the 1980s watching films such as E.T.- The Extra-Terrestrial (1982) and those it inspired and wondering why they always reflected American suburbia rather than the local landscape he grew up with in South London. Thus he conceived Attack the Block as a science-fiction film that reflected his own world. The idea for the central characters in Attack the Block came about after Cornish was mugged and saw that his teenage assailants were as frightened as he was.

In Attack the Block, the characters and their world are as much the film – if not more so – than the aliens are. Indeed, the aliens are a generic bunch – their jet black design makes them seem shadowy and indistinct and it is not until the very end of the film that we discover any motivation for their attacks. For once, it is those fighting back that are the most colourful in the show and here Attack the Block is unique in its choice of characters. Within the first few minutes of the film, we follow nurse Jodie Whittaker as she is mugged, fully expecting that the aliens will arrive and provide comeuppance against her attackers, only for the film to stay with the muggers as we see then them transformed into the heroes of the show. This is essentially the same as what From Dusk Till Dawn (1996) did – starting with a group of criminals before conducting a plotting bait-and-switch that propels them into an unexpected scenario where we have to then regard them as heroic protagonists defending against a menace.

To gain an idea of how novel a reversal of position this becomes, one need only contrast Attack the Block to Harry Brown (2009), a very similar film about the defence of a British council estate. In Harry Brown we had a near identical vision of down-and-out-youth, random violence and visits to drug dens and weed rooms, while the events in both films is started off by a mugging at knifepoint. For Harry Brown in the form of an aged Michael Caine, this assault and feeling of social collapse was seen as such an affront to his dignity where those responsible were only considered worthy of extermination (a position that seemed to be tacitly supported by the local police).

On the other hand, Attack the Block refreshingly redeems these characters and sees them as an essential part of this world, indeed lets them become the frontline defence force against an invasion force from without – the film even ends with the wish fulfilment fantasy of the block cheering on the young petty thug hero (John Boyega) for his actions. The police are portrayed as next-to-useless when it comes to dealing with the situation – be it effectively responding to the mugging or arresting the right people, and appear to be absent throughout the course of the invasion.

Attack the Block is a good deal of fun. The defence against the alien invasion is conducted via improvised weaponry including knives, baseball bats, fireworks, samurai swords and waterguns. These scenes have a ragged charm – imagine The Goonies (1985) or Super 8 (2011) transplanted into the world of The Wire (2002-8). As much of the fun of the film is watching the characters and their reactions to what is going on than anything else. The film gets a great deal of mileage out of its snappy dialogue – even if some of the local slang almost needs subtitling for international audiences.

The kids give surprisingly good performances – especially John Boyega and the chirpy Alex Esmail. The character arcs follow a predictable trail but Joe Cornish makes all of them work and in heartfelt ways. Beneath the humour and ragtag action, the film also displays a strong social awareness of its milieu.

One of the welcome things about Attack the Block is that it is an alien invasion film that comes without the need to constantly make reference back to previous works in the genre. At most, Joe Cornish names buildings and streets after famous British science-fiction writers – John Wyndham, author of the thrice filmed The Day of the Triffids (1951) and The Midwich Cuckoos (1957) that became Village of the Damned (1960); Aldous Huxley, author of Brave New World (1932); J.G. Ballard, the New Wave author who wrote The Atrocity Exhibition (1970), Vermilion Sands (1971) and the books that became the films Empire of the Sun (1987), Crash (1996) and High-Rise (2015); and Arthur C. Clarke of 2001: A Space Odyssey (1968) fame – which makes a refreshing change from quoting other films for once.

A surprising number of the names here went on to bigger things – John Boyega sprinboarded off his role here to become the lead in the third Star Wars trilogy beginning with Star Wars Episode VII: The Force Awakens (2015), while Jodie Whitaker went on to become the first female Doctor Who (2005- ).

Joe Cornish subsequently went on to direct the modern-day Arthurian adventure The Kid Who Would Be King (2019).