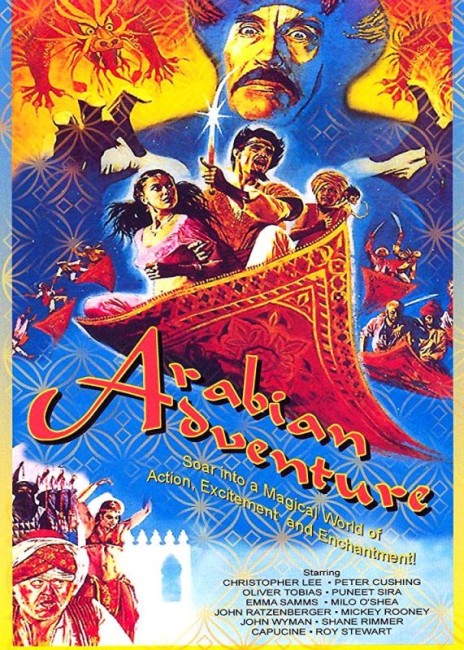 The evil Caliph Alquazar has imprisoned his soul in a mirror. The only thing now capable of defeating him is the magical Rose of Elil. Alquazar recruits the adventurer Hasan, who claims to be a prince, to go and obtain the Rose of Elil, promising Hasan the hand of Princess Zuliera in return. Joined by young rogue Majeed and his pet monkey, Hasan fights the perils on the Island of Elil to complete the quest, unaware that all that waits him at the end is Alquazar’s treachery.

Arabian Adventure comes from the British producing and directing team of Kevin Connor and John Dark. Starting out at the British horror-producing company Amicus, Kevin Connor and John Dark together made a middling to occasionally quite good series of lost world films – The Land That Time Forgot (1974), At the Earth’s Core (1976), The People That Time Forgot (1977) and Warlords of Atlantis (1978) – all starring Doug McClure and all but the last adapted from books by Edgar Rice Burroughs.

Arabian Adventure tries hard but ultimately proves to be a bland run through most of the Arabian Nights cliches. The characters are clearly patterned after the classic Sabu version of The Thief of Bagdad (1940). However, Arabian Adventure is too banal-minded in the writing to soar with the fabulous sweep that classics of the Arabian Nights genre like either the Douglas Fairbanks The Thief of Bagdad (1924) and the abovementioned Sabu versions did.

The other major influence on the film is Star Wars (1977), whose giant shadow clearly inspired the making of Arabian Adventure and a good many other fantasy films around the same time. Such obvious influence leads to a few incongruities – like seeing flying carpets conducting WWI-styled dogfights a la the Death Star trench sequence and the genii’s blasts of magic dubbed with the sound effects normally reserved for rayguns.

The romantic leads – Oliver Tobias and Emma Samms – are wooden, while Milo O’Shea and, more likeably so, Mickey Rooney indulge in some silly over-acting. However, the young Sabu-clone Puneet Sira has charm. Christopher Lee provides reliable villainy as always. There is a surprisingly good score and the effects work with the flying carpets is good. The set people strain admirably but fail to succeed in covering the gaps left by a middle-of-the-road budget.