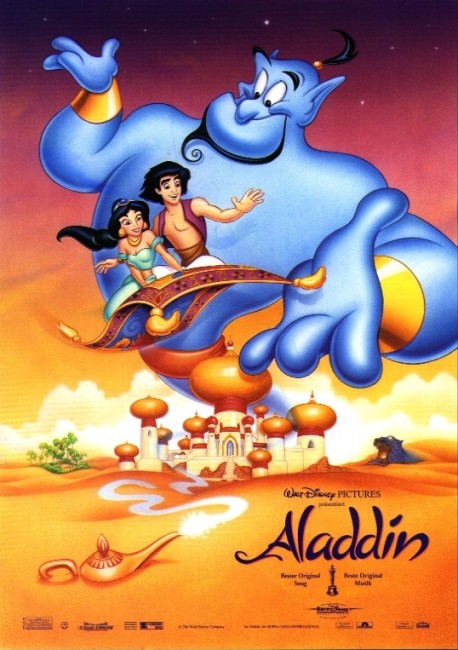 The Sultan gives his daughter the princess Jasmine an ultimatum to choose a husband within three days. Tiring of the suitors that come, she flees into the marketplace disguised as a commoner. There the young thief Aladdin saves her from trouble and the two are attracted to one another. Aladdin is then arrested by the sultan’s conniving vizier Jaffar. Jaffar realises that Aladdin is the one destined to steal a magical lamp from a deadly cave in the desert and fools Aladdin into going there. When Aladdin becomes trapped in the cave, he unintentionally releases the zany genie that is trapped in the lamp. The genie offers Aladdin three wishes. The first that Aladdin chooses is to become a prince in order to win Jasmine’s hand. However, he must then deal with the treachery of Jaffar who wants both the lamp and Jasmine’s hand.

Aladdin was one of the biggest hits of the 1990s renaissance of Disney animation. Indeed, Aladdin comes from the same directing and musical team that spearheaded the modern 1990s revival of Disney animation with The Little Mermaid (1989).

Aladdin is firmly intended as a crowd-pleaser – the downside unfortunately is that that is it. It is well made and enjoyable but ultimately an exercise in calculation. The plot feels like a constructor set compilation of just about every plot device from every Arabian Nights fantasy from The Thief of Baghdad and the Sinbad films to Ali Baba – marshalling such stock themes as the evil vizier who manipulates the good-hearted but weak and overweight sultan; the thief who poses as a prince; the thief’s winning the princess’s heart despite his lack of station; she being desired by the vizier; the genie; the monkey companion; the quest for a magic object (that the thief is tricked into by the vizier) and must make in order to win the princess. Even the character’s names seem generic – Princess Jasmine, Vizier Jaffar.

Much of what is in Aladdin has been copied from Richard Williams far superior but far more problem ridden The Thief and the Cobbler (1994), with some personnel having worked on both films. The only character that is not a cliche in all this is the princess who, in the new Disney mold, is considerably more liberated and in charge of her own destiny than most of the wall-decoration types that had served as women’s roles in Disney films up until this point.

Disney conducted a casting coup in managing to obtain Robin Williams in the role of the genie – indeed, Aladdin began the process that is now widespread in animated films of casting star names in voice roles. However, the presence of Robin Williams is also something that seriously bends Aladdin out of shape. He bursts in with a manic barrage of one-liners, something the animators vainly try to keep up with and give literal image to. There is an irritably hip modernness to it – “Call me Al,” Aladdin states gratingly at one point. Williams conducting anachronistic impersonations of everything from Jack Nicholson to Arsenio Hall, transforming into microphones, air hostesses and submarines, even in-references to Pinocchio (1940). It is amusing enough and certainly Robin Williams gives the film and its cliches a big boost of energy but one wishes we had had an Arabian Nights tale that was more genuine in feeling and one less obviously and relentlessly attuned towards a modern audience.

Another problem with Aladdin is the more stretched form of representation in the animation, a la Sleeping Beauty (1959), something that seems far less appealing and less human in shape. The pace is dizzying – although this seems too calculated as well. Aladdin is at its best during its quieter moments such as the romance between Aladdin and Jasmine, although that has its curious lack of plausibility too – the business about she not buying who he is going on far too long.

Aladdin was followed by two animated made-for-video sequels – The Return of Jafar (1994) and Aladdin and the King of Thieves (1996), as well as a popular animated tv series, Aladdin (1993-6). Aladdin (2019) is a live-action remake from Guy Ritchie with Will Smith as the Genie and Mena Massoud as Aladdin. Jasmine also makes a cameo appearance as one of the Disney princesses in Ralph Breaks the Internet (2018). The live-action Disney Channel film Descendants (2015), featuring the children of Disney villains, had the character of Jafar’s son.

The directing team of Ron Clements and John Musker had previously worked on the splendid The Great Mouse Detective (1986) and then went solo for The Little Mermaid. Into the 1990s, they have become one of the most successful of Disney’s directing teams with the likes of Hercules (1997), Treasure Planet (2002), The Princess and the Frog (2009) and Moana (2016). However, all of their works bar the last betray the same irritatingly hip, modernist attitude towards the source material.