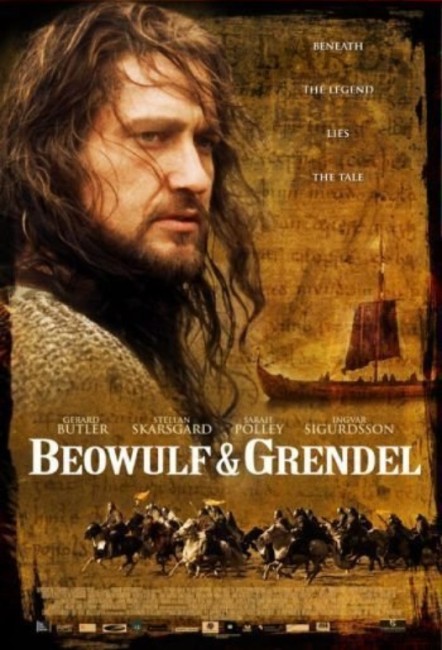 Daneland, 500 A.D.. As Hrothgar, the king of the Danes, and his men cross the land, they slaughter a man they randomly encounter. However, Hrothgar sees the man’s son clinging to a clifftop and lets the child live. Several years later, Hrothgar opens a new mead hall but soon after the giant troll Grendel enters and slaughters Hrothgar’s men while they sleep. The troll continues to return and kill the Danes. The Geatish hero Beowulf hears of the plight of Hrothgar, his blood brother, and sets sail to Daneland with twelve warriors, determined to kill Grendel. There Beowulf is drawn to Selma, a woman who is socially castigated by the Danes because she is reputed to be a witch and able to tell futures. Selma tells Beowulf how Grendel may be more humane than the monster the Danes see it as and that it is driven by personal vengeance.

Beowulf is a verse poem written in Old English and is considered one of the great epic works of early literature. Beowulf‘s author is unknown and the date of its writing is only roughly estimated as being somewhere between the 9th and 11th Centuries. The work describes how the hero Beowulf and his twelve comrades from Geat (a tribe from Sweden, also known as the Ostrogoths) venture to Daneland (Denmark) to aid King Hrothgar who is besieged in his mighty meadhall Heorot by the troll Grendel. The single original manuscript of the poem existed in private ownership and was not translated into modern language until 1820 and into English in 1837. (In an interesting piece of trivia, Beowulf languished in obscurity until J.R. Tolkien published an essay in 1936 arguing the literary merits of the work). Some of the characters in Beowulf are believed based on historical people and an archaeological dig in the 1980s revealed the remains of a large hall exactly where the manuscript describes Heorot as being.

For all its stature as probably the first work of what we know as heroic adventure fiction, Beowulf has had an erratic history on film. In fact, up until the millennium there had been no actual screen adaptations of the legend itself but peculiarly several deconstructions of Beowulf – the Australian animated film Grendel Grendel Grendel (1981), based on John Gardner’s novel, which retells the story from the point-of-view of Grendel; the Troma film Beware: Children at Play (1989) where the leader of a group of killer children believes himself to reincarnation of Grendel and the epic plays out in modern day; the Star Trek: Voyager episode Heroes and Demons (1995), which turns the story into a holodeck simulation; Beowulf (1999), which was a retelling of only the first third of the poem that relocated it to a world that was a peculiar mix of Mediaeval and post-holocaust; and The 13th Warrior (1999), based on Michael Crichton’s novel Eaters of the Dead (1976), which explains the story away as an encounter between Viking warriors and surviving Neanderthals.

The 00s however saw a sudden crop of Beowulf adaptations with this version being first up, followed by Grendel (2006), an adaptation for The Sci-Fi Channel; the low-budget American-shot Beowulf: Prince of the Geats (2007); Robert Zemeckis’s high-profile performance capture animated Beowulf (2007); Outlander (2008), which told the story in science-fiction terms with Grendel as an alien monster; and the British tv mini-series Beowulf: Return to the Shieldlands (2016). Almost certainly, this sudden cinematic interest in Beowulf came about as a result of the renewed popularity of epic fantasy on screen after the success of Peter Jackson’s The Lord of the Rings trilogy.

Beowulf & Grendel comes from Sturla Gunnarsson, an Icelandic-born director who has been resident in Canada since the age of seven. In Canada, Gunnarsson has mostly worked in tv and directed a handful of features with Gerrie & Louise (1997), Such a Long Journey (1998), Rare Birds (2001) and Air India 182 (2009), none of which seem very well known outside of Canada. Gunnarsson’s screenwriter is Canadian tv writer Andrew Rai Berzins whose one previous genre entry was the oddball vampire film Blood & Donuts (1995) and subsequently wrote the future-set tv movie Borealis (2013).

Sturla Gunnarsson reportedly conceived Beowulf & Grendel as a work that would make full use of his Icelandic homeland (even though Iceland is technically some 1300 miles away from where the story of Beowulf is located). One can see that Gunnarsson is clearly attempting to do with Iceland the same that Peter Jackson did with New Zealand in The Lord of the Rings – that is to say use a country that is renowned for its raw, natural scenery to represent a primordial land of myth and legend. (Although, if anything, Iceland’s landscapes look far more raw and primal than New Zealand did in The Lord of the Rings).

On the minus side, Gunnarsson clearly does not have the stratospheric budget available that Peter Jackson did (or for that matter Robert Zemeckis in his high-profile adaptation that came out not longer after Beowulf & Grendel). The sets built are minor ones – Heorot is not the mighty meadhall that one imagines from the legend; the battle scenes never extend beyond a couple of combatants swinging swords in practice combat; and there are no CGI effects at all.

Far more so than The Lord of the Rings, what one suspects inspired Sturla Gunnarsson and Andrew Rai Berzins was not the idea of creating another fantasy film but making an historical epic. Beowulf & Grendel has far more in common with the recent fad for historical films such as Gladiator (2000) and in particular Braveheart (1995) than it does a fantasy film. As with other recent historical epics like King Arthur (2004), Troy (2004), Tristan + Isolde (2006) and Exodus: Gods and Kings (2014), Beowulf & Grendel is notably an adaptation of a classic work of legend that has stripped all the mythical/fantastical elements out and retold the work as a realist historical story.

In the original Beowulf, there is considerably more in the way of fantasy elements than there is here – Grendel has a magic invulnerability that protects him from damage; Beowulf is given Hrunting, a magical sword, to combat Grendel’s mother. More noticeably, while Beowulf & Grendel is generally faithful to the original text, it has dumped one third of the entire original story – the part that deals with Beowulf returning home to become king and then fighting a dragon that is terrorizing the kingdom, losing his life in the process. There is not much left in the film that could be construed as fantasy any more – Sarah Polley’s witch who appears able to see the future and Grendel’s mother, a Valkyrie-like sea hag, who appears from beneath the water to drag men to their doom, both of which are ambiguously fantastic.

In his telling, Andrew Rai Berzins takes a much more sympathetic view of Grendel. In the original, Grendel is considered a creature of evil and is said to be descended directly from the Biblical Cain – the unknown author takes an unambiguous black-and-white view in regarding Grendel as evil. However, Berzins approaches from a position of moral relativism and makes Grendel far more of a human character – he is not a monster, simply someone (who seems more a human giant than a monster) that is exacting vengeance against the Danes because of Hrothgar’s murder of his father (an aspect that does not exist in the poem).

Indeed, Andrew Rai Berzins’ deconstruction of Grendel is such that in the film the story of Beowulf is no longer so much one about a hero confronting a monster than about a hero exposing an injustice – a king’s casual cruelty and the vengeful wounded hurt of a social outcast. This element concerning social outcasts runs throughout the film and is reinforced elsewhere in the characters of Sarah Polley’s witch and of the intellectually handicapped man that Beowulf saves from being stoned by children.

One of the great academic debates about Beowulf has always been whether it was conceived as a Christian or a pagan work. Although Biblical references exist in the work, the poem seems to be neutral about such matters and most scholars seem to agree that it was probably originally a pagan legend that was subject to rewriting by a Christian author. Andrew Rai Berzins manages to not only reinterpret Beowulf but to dig beneath it into the bedrock of a great many academic issues that exist about its authorship and to cleverly make these into the historico-cultural locus of the film.

Like fantasy films of the 1980s such as Dragonslayer (1981) and Excalibur (1981), Berzins sets Beowulf & Grendel on the cusp between the end of paganism and the emerging new ideology of Christianity. Certainly, this is not an element that is present in the poem – there is no character of Father Brendan or equivalent thereof in the original, for instance; neither does the character of the pagan witch Selma (played by Sarah Polley) exist in the original legend; and neither do King Hrothgar and the Danes convert to Christendom.

At the time he appeared as Beowulf here, Gerard Butler was just emerging as a name actor. Here he has a role that allows him to rise to heroic strength and does well with the part. Both Stellan Skarsgård and Sarah Polley give solid and reliable performances in their roles.

(Winner in this site’s Top 10 Films of 2005 list. Nominee for Best Adapted Screenplay and Best Supporting Actor (Stellan Skarsgård) at this site’s Best of 2005 Awards).