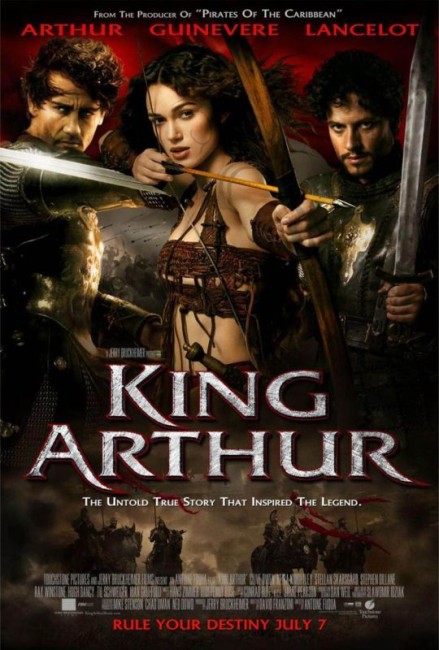 Britain, 467 AD. The Roman-British commander Arthur leads a troupe of legionnaires from Sarmatia in defending Roman-controlled Britain against attacks from the Saxons and the Celts. The troupe has become legendary for their fighting abilities. A Roman bishop arrives to deliver Arthur’s men’s release papers so that they can return home after fifteen years but asks that they conduct one mission first – rescue an important Roman, Marcus Honorius, from his home near the Saxon lines of attack – a mission that is likely to be highly dangerous. When they arrive, Arthur is shocked to find that Marcus treats his serfs like slaves and has bricked up a group for practicing their religion. Among the serfs that Arthur frees is the Celt warrior girl Guinevere. The two become attracted to one another during the journey back. As they face attacks from overwhelming Saxon numbers, Guinevere leads Arthur to a meeting with Merlin, the druid leader of the Celts. There Arthur realises that he has a destiny to unite Britain – but only by his turning his back on Rome.

King Arthur comes promising to tell “the untold true story that inspired the legend.” Much is made in the publicity that it is telling a true historical version of the Arthurian legends. In that King Arthur is also produced by Jerry Bruckheimer, king of loud noisy bombast like Bad Boys (1995), Armageddon (1998), Gone in 60 Seconds (2000) and Black Hawk Down (2001), one remains ever so slightly sceptical. Indeed, Jerry Bruckheimer’s previous ventures into historical cinema can be summed up by Pearl Harbor (2001) and Pirates of the Caribbean: Curse of the Black Pearl (2003), not to mention the liberties taken with recent history by Black Hawk Down. One suspects that Jerry Bruckheimer’s venture into Arthurian legend was less to do with reinventing a familiar story than it was in jumping on the 00s box-office bandwagon of a renewed interest in historical spectacle – a la Gladiator (2000), Troy (2004) and Alexander (2004).

Most critics jumped on King Arthur and dismissed it as historically nonsensical. In fact, this is not the case at all – indeed, King Arthur is probably more historically grounded than all previous Arthurian films put together. Although the opening title card is somewhat inaccurate about the film being based on recently recovered evidence, King Arthur is taken from speculation put forward by the historian Kemp Malone in 1924 that Arthur was a Roman military officer Lucius Artorius Castus who commanded an equestrian garrison made up of Sarmatian troops defending regions around Hadrian’s Wall towards the end of the Second Century A.D. It should be noted that the only evidence concerning Artorius comes from inscriptions on his sarcophagus and a nearby plaque. Anything beyond that is speculation based entirely on the similarity of the names Artorious and Arthur. The Arthurian legends that we recognise today – involving Merlin, Lancelot, Excalibur, the Holy Grail and the Round Table – were largely shaped during the 12th Century French court, more than a thousand years after Artorius lived.

The script for King Arthur comes from David Franzoni who also wrote other historical films such as Amistad (1997), Gladiator and a planned version of Hannibal with Vin Diesel. Franzoni makes an interesting attempt at harmonising Kemp Malone’s historical speculations about Arthur and the Arthur of legend. Here Merlin is not a wizard but a druid; Guinevere is clearly modelled on the Celtic warrior queen Boadicea; and rather than pull the sword from the stone, Arthur claims it out of his father’s burial mound.

In also rooting King Arthur in the time period that he does, Franzoni strips the Arthurian legends of all the Middle Ages chivalry that it is usually depicted with. More importantly, King Arthur has been de-fantasticised – thus there is no magic, no Holy Grail, no Morgan-le-Fay and no Mordred.

Franzoni correctly sees that in order to become the symbolic figure bridging pagan England and modern Christian England that Arthur is in myth, that the Christianity of the time would have been solely represented by the Catholic Church. Franzoni fudges the history somewhat – for one, the historical Artorius lived some three hundred years before the Saxon invasions. (Although one peculiar piece of trivia is that the emperor that the real Artorius would have been serving under would have been the same Commodius portrayed Joaquin Phoenix in Gladiator).

In the end, for all its nod towards historical authenticity, so much has been bled out of the Arthurian legends that King Arthur is more an historical spectacle than it ever is a film about King Arthur. One of the key elements of the Arthurian legends, for instance, is the love triangle where Lancelot woos Guinevere away from Arthur and how their infidelity causes Arthur’s kingship to fall inwards. Here all Lancelot does is throw a few intent-laden looks in Guinevere’s direction but is then killed off before Arthur and Guinevere even get married.

The greatest contrast can perhaps be seen in the fact that, while the dramatic thrust of the film is Arthur declaring his independence from Rome and a big battle where he overcomes the Saxon hordes despite being massively outnumbered, such scenes or even any equivalent thereof do not even appear in the Arthurian legends. What we have is a film that pays lip service to telling the historical story of King Arthur, but only appropriates the names of Arthur, Guinevere, Merlin et al to mount a standard historical spectacle.

Director Antoine Fuqua, known for the acclaimed Training Day (2001), the Bruce Willis flop Tears of the Sun (2003) and subsequent works like Shooter (2007), Brooklyn’s Finest (2009), Olympus Has Fallen (2013), The Equalizer (2014) and The Magnificent Seven (2016), does a fair job with the machinery of big-budget spectacle. Especially good is one of the battle scenes with Arthur and half-a-dozen others defending themselves against a horde of Saxons in the middle of an iced-over river.

Clive Owen has a handsome leading-man quality but is an actor who works better in a much more intimate film than this and here only walks around with his beagle-like good looks drooping melancholically, giving the impression he would be a lot happier being somewhere else. Keira Knightley, an attention-grabbing sensation in Jerry Bruckheimer’s Pirates of the Caribbean, strides with intensity but is not given a much to do – the romance, for instance, is a surprisingly low key element of the film. The show is fairly much stolen by Ray Winstone’s rough diamond comic relief and by Stellan Skarsgård as the brooding Saxon leader.

Other versions of the legend of King Arthur are:– a Three Stooges spoof Squareheads of the Round Table (1948); the Cinemascope historical adventure, Knights of the Round Table (1954); the live-action tv series The Adventures of Sir Lancelot (1956-7); Cornel Wilde’s Lancelot and Guinevere (1963); the Disney animated version with cute animals, The Sword in the Stone (1963); the comic cartoon series Arthur and the Square Knights of the Round Table (1966); the big budget musical, Camelot (1967); Robert Bresson’s deconstructed Lancelot du Lac (1974); King Arthur, The Young Warlord (1975); the absurdist comedy send-up, Monty Python and the Holy Grail (1975); the arthouse Perceval Le Gallois (1977); the tv series The Legend of King Arthur (1979); the German tv series Merlin (1980); the dreary TV mini-series Arthur the King/Merlin and the Sword (1981); the superb Excalibur (1981), the finest screen version of the Arthurian story to date; the Wagnerian opera Parsifal (1982); the tv series Merlin of the Crystal Cave (1991); the animated tv series King Arthur and the Knights of Justice (1992-3); a modern updating, October the 32nd/Merlin (1992); Arthur’s Departure (1994) about time travellers attempting to snatch King Arthur; First Knight (1995), which retells the story as a non-fantastical romance; Kids of the Round Table (1995), a children’s version that retells it in schoolyard terms; Lancelot, Guardian of Time (1997) with a time-travelling Lancelot; the tv mini-series Merlin (1998) and its original sequel Merlin’s Apprentice (2006); the tv movie Merlin (1998) with Jason Connery as the young wizard; the animated Quest for Camelot (1998), which concerned the daughter of one of the Knights of the Round Table; The Excalibur Kid (1999) in which a child is transported back in time to Arthur’s court; Merlin: The Return (1999) in which Arthur and the knights are revived in the present; the tv mini-series The Mists of Avalon (2001), which tells the story from the perspective of the women; The Last Legion (2007), an historical spectacular that acts as a prequel to the Arthurian saga; the tv series Merlin/The Adventures of Merlin (2008-12); Merlin and the Book of Beasts (2008); the tv series Camelot (2011); King Arthur: Excalbur Rising (2017); Guy Ritchie’s big-budget King Arthur: Legend of the Sword (2017) starring Charlie Hunnam; and The Asylum’s mockbuster King Arthur and the Knights of the Round Table (2017), which places the Knight of the Round Table in the present-day; the modernised The Kid Who Would Be King (2018); and Arthur & Merlin: Knights of Camelot (2020). Other variants include the lowbrow comedy foil of Mark Twain’s A Connecticut Yankee in King Arthur’s Court (1889), filmed variously in 1921, 1931, 1949, 1979 and 1989. Parts of the myth have turned up in various films and particularly tv series – Merlin (played by Ringo Starr) as an advisor to various Famous Monsters in Son of Dracula (1974); The Round Table turned up in an episode of Robin of Sherwood (1983-6); Merlin and Lancelot appeared in the present day in an episode of The Twilight Zone (1985-7); the Doctor Who (1963-9) episode Battlefield (1989) attempted a science-fictional retelling, while Transformers: The Last Knight (2017) revealed the Knights of the Round Table were Transformers and Hellboy (2019) featured a revived Merlin and had Hellboy wielding Excalibur; and various series have played the myth out in various futuristic settings – against a post-holocaust dictatorship in Knights of God (1987) and as a puppet space opera in Space Knights (1989).