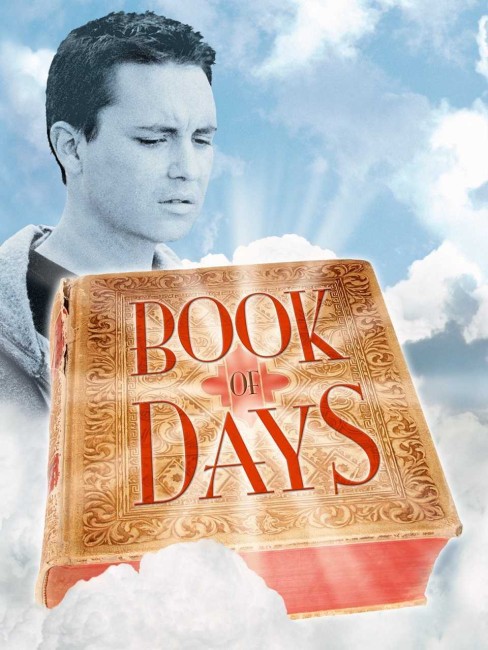 Insurance salesman Daniel Hartland marries former nun Caroline Winters. However, just as they are driving away from the chapel, a drunk driver rams into their car and Caroline is killed. Afterwards, Daniel angrily rails against God, demanding to know why He allowed this to happen. Things get worse as Daniel’s boss Richard Worthington refuses to pay out on Caroline’s life insurance policy and then demands that Daniel return to work and meet near-impossible quotas. A mysterious deliveryman then leaves Daniel a parcel containing a book called Liber Diei (Book of Days). Daniel and his good friend photographer Frankie Newhall discover that the book contains a list of names and the dates upon which each of the people listed is going to die. Daniel uses these to up his insurance quotas. He then discovers that his friend, the nun Sister Grady, is due to die. He intervenes to save her life – only to find that in giving her ten more years he has had these taken off his own life according to Heavenly arithmetic. Worthington’s son gets hold of a list and reports it to the police who then suspect Daniel of having killed the people. However, when Daniel decides to save the life of an elderly man to ‘disprove’ the list to Worthington, the man’s wife dies instead and Daniel is placed on trial. With his mother acting as lawyer to defend him, they fight to stop the knowledge of the Book of Days coming out.

Book of Days is one of the better of these Christian-made films. It is not too preachy and can be enjoyed simply in terms of its premise instead of as a sermon. There is certainly much mention made of God and quoting of the scriptures throughout. However, screenwriter Susan Rohrer does provide some decent twists and contortions of the basic premise. There is some good writing during the dramatics of the court case and especially during Maureen Flannigan’s expressions of love. The film works the best when it comes to some of the plotting convolutions and moral problems presented – whether to use such a book to aid oneself at work, or indeed whether to sacrifice ten years of your life in order to get oneself out of a difficult situation.

There are certainly some parts that seem strained credibility – Wil Wheaton and Maureen Flannigan experience no amazement at receiving the book, not the least any curiosity over who their mysterious benefactor was in giving it to them, while the chain of events that leads up to Wil Wheaton being charged with murder is highly improbable.

Not to mention the odd poorly research historic fact – such as it being mentioned that the book was discovered in Gomorrah (which, if it ever existed, was in Jordan sometime around the Early Bronze Age) but then it being written in Latin (a language that was not spoken at its earliest point until at least a thousand years later. While on the subject of Latin, the title ‘Liber Diei’ correctly translates as ‘Free Days’ as opposed to ‘Book of Days’). In the end though, Book of Days is a modest film – one that is surprisingly strongly scripted and where the religion forms a part of the plot but is not too preachy.

Wil Wheaton, despite being 30 years old when the film was made, still cannot seem to shake typecasting as Wesley Crusher from Star Trek: The Next Generation (1987-94). He just seems too boyish and cute – you fail to believe him when he tries to act outraged and grief-stricken. Wheaton is far out-acted by the relatively unknown Maureen Flannigan, then best known as the half-alien teenage girl in tv’s Out of This World (1987-91) and a recurring role in tv’s 7th Heaven (1996-2006). There is even an appealingly slimy performance from a near-unrecognisable former teen heartthrob Richard Grieco as a lawyer.