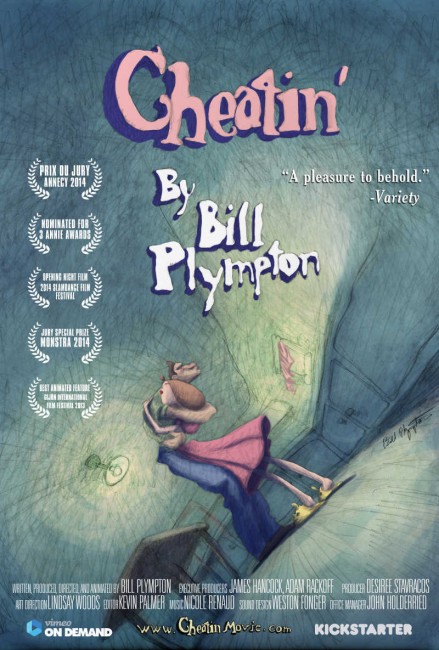 The beautiful Ella turns heads as she walks through a fairground. Pushed into a dodgem car ride by a barker, she ends up in a bizarre accident that has her car hanging from the ceiling over the electrified floor but is saved by the muscular Jake. Despite Jake being on a date with another woman, it proves to be love at first sight. They promptly marry and move in together. However, a jealous dress store owner contrives to pose Ella amid mannequins in a way that looks as though she is with several other naked men and takes a photo, which he slips to Jake. Hurt by this, Jake embarks on multiple affairs with the women who stop by the gas station where he works as attendant. Ella is hurt when she discovers a phone number from one of the women in Jake’s pocket. She hires a hitman to eliminate Jake during one of his motel trysts but this goes wrong. She then encounters the shabby magician El Mertos who shows her a machine he has that allows her to transfer her soul into other women’s bodies, which she then uses to go and lure Jake to the motel.

Bill Plympton came to fame in the 1970s with his satirically absurd cartoons, which appeared in high-profile magazines such as National Lampoon, The New York Times, Penthouse, Rolling Stone, Screw, Vanity Fair, The Village Voice and Vogue. In the late 1970s, Plympton turned to making animated shorts, which became distinctive for their wildly surreal visuals. He has made some 40 odd animated shorts since, being nominated for a Best Animated Short Film Academy Award for both Your Face (1987) and Guard Dog (2004).

Plympton has also made eight feature-length animated films with The Tune (1992), I Married a Strange Person (1997), Mutant Aliens (2004), Hair High (2004), Idiot and Angels (2011), Hitler’s Folly (2016) and Revengeance (2016) plus the H is for Head Games segment of ABCs of Death 2 (2014) and the On Eating and Drinking segment of Kahlil Gibran’s The Prophet (2014), as well as three live-action films with J. Lyle (1994), Guns on the Clackamas: A Documentary (1995) and Walt Curtis: The Peckerneck Poet (1997), the latter two being mockumentaries. The Tune gained distinction for being the first full-length animated film where the director drew every single frame himself.

Plympton has never exactly been a commercial film director or a multiplex success. His films tend to have a cult following around arthouses and festivals. Cheatin’ represents the first occasion where he raised $100,000 worth of funding to make the film via a Kickstarter campaign.

Cheatin’ hits in with the unique and distinctive Plympton style. The animation is all hand-drawn, often crude pencil sketches that seem a world away from anything we expect from multiplex animation. There is no dialogue from any of the characters, just grunts and onomatopoeia. The setting resembles an exaggerated vision of 1950s Americana. The characters are all wildly over-the-top physical caricatures – Jake, for example, is all massively muscled torso and skinny waist such that he tends to resemble a sledgehammer rather than the human form.

The film spins with a wild fantasia of imagery as Plympton’s films are wont to do. The opening scenes with Ella passing through the carnival have an appealingly strange stylism and in particular the initial meeting of the two via a dodgem car ride is a masterpiece of surreal nonsense exaggeration and whacked parodies of romantic posturing. There is an appealing sequence that covers their attraction – a wild dive down through locks, whirlpools and passages until it reaches her heart – and a perfectly Plympton-esque montage of imagery and transmogrifications that covers their romance, marriage and fantasies of popping out babies.

Cheatin’ also feels like slightly quieter Bill Plympton. It places more emphasis on plot than his earlier feature-length films and thus is slightly less focused on the weirdness of the images. The plot also seems a bit random at times – the whirl of relationships, trysts and posings moves at a madly frenetic pace that becomes somewhat difficult to follow in its whiplash jumps between either protagonist and then the bodyswapped heroine and the other women. There is the introduction of the magician and his machine that feels like it comes out of nowhere as a left field plot device towards the ending. Still the heady swim of Plympton’s imagery and heated sexual jealousies makes welcome anathema to the plethora of cutsie talking animals filling out the Disney/Pixar/Dreamworks multiplex offerings.