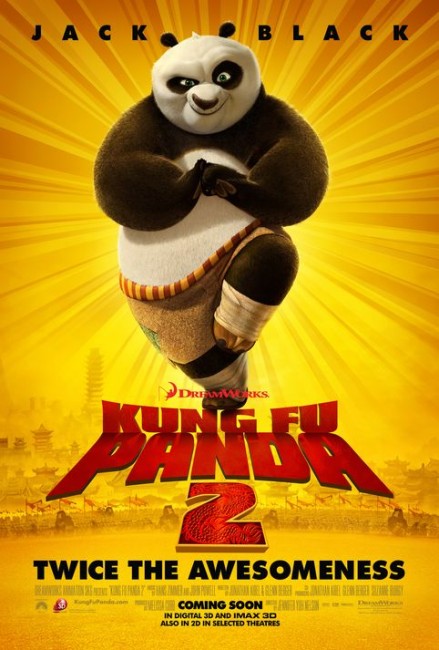 The peacock Lord Shen invades Gongmen City with his army of wolves and easily overcome the city’s soldiery because he has harnessed the might of fireworks as a weapon. Master Shifu fears that this new threat will destroy kung fu unless it is stopped and calls Po and the Furious Five into action. As they head to Gongmen City, Shen realises that Po is the enemy that it has been foretold will defeat him. He makes all effort to kill Po but Po manages to survive. Po has also discovered that he is an orphan. In confronting Shen, Po has flashbacks that make him realise that Shen was responsible for the death of his parents.

Kung Fu Panda (2008) was the second biggest hit for DreamWorks Animation, next to Shrek (2001). It became the sixth highest grossing film released in 2008. I felt equivocal about Kung Fu Panda – it seemed not a huge amount more than a cute one-note joke based around the title concept and the rest being slapstick gags predicated on precisely how much one warmed to the whole Jack Black thing. The film felt as though it had worn out all the possibilities in its premise by the time it reached its end. That aside, many audiences regard Kung Fu Panda as a modern classic. It receives an inevitable sequel with Kung Fu Panda 2 here and this was subsequently followed by Kung Fu Panda 3 (2016).

The good news (or bad depending on how well you liked the first film) is that Kung Fu Panda 2 is fairly much the same formula as before, deviating only sufficiently for it not be a blatant carbon copy. We get the addition of a backstory in which Po realises he is an orphan and seeks to find what happened to his parents. The rest of the film is centred around how Po bumbles his way into most situations and makes half-hearted effort to attain some martial discipline before realising it doesn’t matter. There are a good many fat jokes and gags about his desire to eat everything in sight.

When it comes down to it, the Kung Fu Panda films are a lazy person’s films – they sing the virtue of being an idle, overweight slob and how fannish enthusiasm and a self-inflated belief in your own awesomeness can trump the thought of spending years training and perfecting a discipline (just try that as an approach in the workplace or some other highly skilled discipline and see how far it gets you).

As with any sequel, Kung Fu Panda 2 sees its onus is not to vary the basics but to up the scale of detail and artistic quality over the original. In this regard, director Jennifer Yuh Nelson, a South Korean-born newcomer who had previously worked as a DreamWorks story supervisor and storyboard artist, delivers something that is frequently a work of art. The film comes with an extraordinary richness of texture and detail, while backgrounds are lit with orange fire colours that have a considerable beauty.

Jennifer Yuh Nelson also ups the scale of the action, creating some epic-sized battles, especially when it comes to the climactic scenes. Unlike the first film, Kung Fu Panda 2 comes in the ubiquitous 3D process thus we get lots of dizzying leaps off cliffs and people/objects flying into the camera in slow-motion to take full advantage of this.

Ultimately though, Kung Fu Panda 2‘s focus lies in not much more than the provision of a series of slapstick scenes – Po careening through Gongmen City on an out-of-control rickshaw; the Furious Five hidden inside a carnival dragon moving through the streets devouring wolf guards and so on. The art of the film and battle sequences are undeniably impressive but coming nested in an otherwise routine comedy-focused film that is pitched to family audiences, it is eye candy that is pretty to watch but ultimately seems like overkill. I mean, do the under ten year-olds, which are essentially who Kung Fu Panda 2 is made for, sit there going “wow” at the density of background texture or the artistry of the battle scenes? One doubts it.

Subsequent to this, Jennifer Yuh Nelson went on to direct the live-action Young Adult psychic powers film The Darkest Minds (2018).