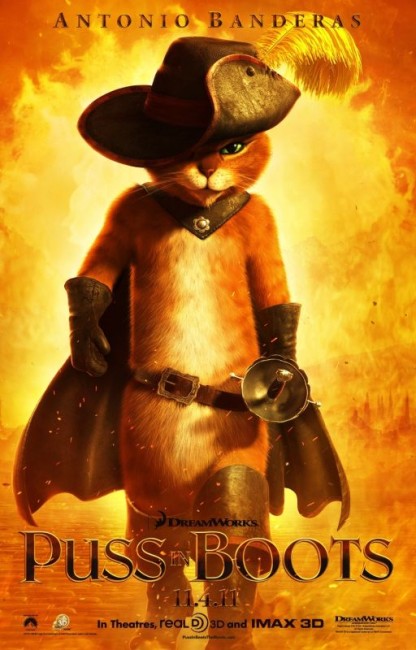 A wanted outlaw in Spain, Puss in Boots learns in a bar about the magic beans in the guarded possession of Jack and Jill. He attempts to steal the beans but is upstaged by a masked thief before both of them are driven off. Pursuing the thief, Puss in Boots finds that she is none other than the famous Kitty Softpaws. Kitty reveals that she works for Humpty Dumpty whereupon Puss in Boots walks out. He and Humpty grew up as children in the same orphanage in San Ricardo but while Puss in Boots was acclaimed a hero for his bravery, Humpty Dumpty fell into a life of crime and dishonour. Humpty pleads with Puss in Boots that he wants to make up for the past. He persuades Puss in Boots to join him and Kitty in stealing the beans from Jack and Jill in a daring raid. They then plant the magic beans and grow a giant beanstalk that reaches to the kingdom in the clouds where they set forth to steal the golden eggs.

Puss in Boots is a spinoff from DreamWorks mega-successful Shrek franchise. The series began with Shrek (2001), which proved to be DreamWorks’ biggest hits with its playfully offbeat approach to fairytales and was one film that all seemed to enjoy. DreamWorks subsequently spun this off into three sequels of ever-weakening quality – Shrek 2 (2004), Shrek the Third (2007) and Shrek Forever After (2010). As the sequels progressed, the films seemed to be stretching the appeals of the original more and more thinly, allowing the premise to become overrun by inane audience-pleasing humour. Introduced in Shrek 2, Puss in Boots, voiced by Antonio Banderas, was a bright sparks of originality and became a fixture of the series thereafter. With most having acknowledged that the rest of the Shrek franchise has run out of creative steam, Puss in Boots has now been spun out into his own film (although the mentioned franchise has failed to emerge despite the reasonable box-office success of the film).

One enters into Puss in Boots with a certain degree of dubiousness. It is directed by Chris Miller, who also made Shrek the Third, which some regard as the weakest film of the Shrek series. On the other hand, Chris Miller was also co-director of Sony Pictures’ colourfully appealing Cloudy with a Chance of Meatballs (2009) and subsequently went onto the live-action film version of 21 Jump Street (2012) and the audience-winning hit of The Lego Movie (2014).

Similarly, the film has Andrew Adamson, co-director of the original and producer of the sequels, present as a producer, which one feels ho-hum about given Adamson’s lacklustre turnout as a live-action director on the first two Chronicles of Narnia films, but also has on board Guillermo Del Toro, fantastique director extraordinaire of films such as Blade II (2002), Hellboy (2004) and Pan’s Labyrinth (2006), who has in recent years rediscovered himself as a producer and/or consultant on animated films such as Megamind (2010), Kung Fu Panda (2011), Rise of the Guardians (2012) and The Book of Life (2014) – here Guillermo Del Toro even ventures into performing for the first time, playing the voice roles of the town’s comandante and the moustachioed man who tells Puss in Boots about the magic beans.

Puss in Boots manages to defy expectation and hits in with an undeniable appeal. Puss in Boots was one of the most creative characters in the Shrek franchise so it makes eminent sense giving him his own film. The filmmakers take the opportunity to tell Puss’s origin story. This is entirely the Puss in Boots as deconstructed by the Shrek films – the character was always based on Mandy Patinkin’s Spanish swordsman Montoya in The Princess Bride (1987) – as opposed to the original Charles Perrault fairytale (where the cat is a clever and artful companion to a miller’s son who helps him win a fortune by trickery and clever-wittedness as opposed to swordsmanship).

As in the Shrek films, there are a few nods to other fairytales – Humpty Dumpty becomes an ambiguous villain/friend of the hero; there is a journey up into the cloud kingdom to steal the Golden Goose from Jack and the Beanstalk; and the appearance of Jack and Jill who appear to have settled into mid-life – although the fairytale spoof is much more laidback here. There is even the sense that what we have takes place in the real world – with the locations clearly being some fantasy version of Spain – as opposed to Shrek‘s fairytale kingdom.

Antonio Banderas and the animators take the opportunity to allow Puss in Boots to fill the screen as a character, oozing with Latino seductive charms and dancing with acrobatic dexterity, while he is also made into a roguish outlaw (at the same time as the filmmakers make sure to have Puss disapproving of larcenous activities such as robbing poor people). In fact, Puss in Boots in Boots remains a far more natural and engaging screen character than the perpetually curmudgeonly Shrek and this a far more energetic and engaging film than all of the Shrek sequels put together.

Unlike the Shrek sequels, the humour is not watered down by a constant pitch to cute and easy audience-identification gags and non-sequitir parodies – about all one picks up is a Fight Club (1999) in-joke – and the emphasis is on comedic action adventure. On the minus side, the film feels like it never opens up to swashbuckle enough – there is not be nearly enough action beyond the caper to steal the beans and the climactic attack by the mother goose. Certainly, unlike DreamWorks’ Kung Fu Panda 2, which came out earlier the same year, the film is focused on fun as opposed to the constant need to be epically artistic.