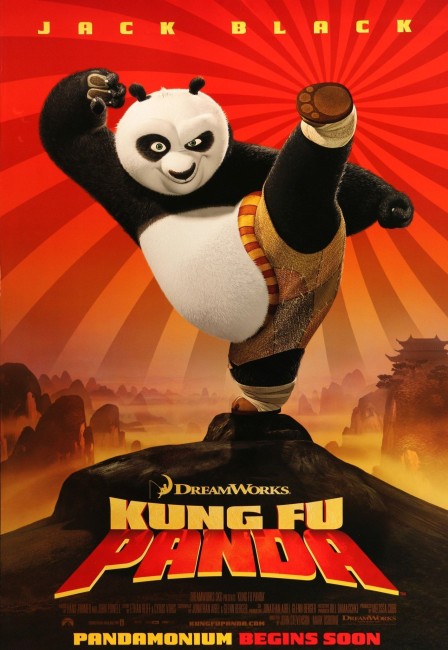 The panda Po dreams of being a great martial artist and fighting alongside the legendary Furious Five. In reality, Po is stuck working as a waiter in his father’s noodle shop. At the Jade Palace, the turtle master Oogway has a premonition that former pupil Tai Lung, a fearsome warrior who turned to the dark side and has been imprisoned for twenty years, is going to escape. Master Oogway decrees that a ceremony be held to choose a Dragon Warrior to take on Tai Lung. An excited Po goes to the palace in the hopes of being chosen but the doors are locked before he gets there. Po’s attempts to gain egress over the wall cause him to land in front of Master Oogway just as he points his finger to select the next Dragon Warrior and he is chosen. The Furious Five and Oogway’s apprentice Shifu believe that Po is the wrong choice. Oogway asks them to wait and see. As the fat and lazy Po stumbles through martial arts training and everything he attempts to do proves to be a disaster, he begins to wonder if his dream of being a great warrior is the foolish notion that everyone else seems to think it is.

Kung Fu Panda was the twelfth animated film from DreamWorks Animation. You cannot deny that it does not have a winning concept. The very title Kung Fu Panda has an appealing wacky amusement that holds your attention from the moment you hear it. Fittingly, the film cleaned up at the box-office after opening and has been DreamWorks second most successful animated film to date. It was one of several Western films that came out in 2008, the year also of the Beijing Olympics, centred around China – see also The Forbidden Kingdom (2008) and The Mummy: Tomb of the Dragon Emperor (2008).

If nothing else, Kung Fu Panda is made with a love of martial arts movies – there are minor characters named after the Shaw Brothers who produced many of the 1970s Hong Kong classics, while the various animals that the Furious Five are all taken from styles of Chinese martial arts. (Not to mention that Kung Fu Panda is probably the first animated film to ever have a credited martial arts consultant). The story is an eminently familiar one to the martial arts genre – that of the relationship between novice and the sensei and the novice’s struggle to master the martial discipline.

Other than its wacky recasting of a standard martial arts story with talking animals, Kung Fu Panda does nothing particularly groundbreaking. Everything runs to predictable story arcs. (I did have a problem with Po suddenly being able to become a fearsome martial arts warrior in the space of about a day, while the Furious Five who have been training since they were children seem unable to defeat Tai Lung between them).

As with many Western copies of Eastern martial arts films – see Big Trouble in Little China (1986), The Golden Child (1986), Bulletproof Monk (2003), which was also written by this film’s co-writers Ethan Reiff and Cyrus Voris, and Wendy Wu: Homecoming Warrior (2006) – there is the recurrent theme of the contrasting clashes between Eastern mysticism and Western vulgarity and pop culture. In the opening dream sequence, for instance, Po dreams of conquering through his “awesomeness and bodacity,” while his eventual triumph seems to be a unique martial form based on eating food and harnessing his excess weight. The message of the film seem to be the peculiar one that obesity can be an advantage, that underdogs are sometimes more than they seem and that somehow recognising this, including the ability to eat everything in sight, is more important than having trained for years.

Everything is presented on screen with an amiability without ever being riotously funny. Most of the first half of the film consists of a string of slapstick gags centred around Po’s constant training mishaps. For a time, you wonder if this is all that Kung Fu Panda has in its arsenal. (Mindedly, one supposes all that the film is doing is riffing on the slapstick martial arts of some of Jackie Chan’s Hong Kong films – notably the Drunken Master series, which consisted fairly much of exactly the same thing).

The highlight gets to be a slapstick fight between Po and Master Shifu over a plateful of dumplings. Once the film settles into the main story in the second half, it becomes reasonably engaging and mounts to a series of highly energetic martial arts sequences, notably Tai Lung and the Furious Five’s battle around a rope bridge and Po’s climactic showdown with Tai Lung. It is produced with a great deal of visual artistry, casually littered with beautiful pastel sunsets and animated falls of blossoms – even at one point a dream sequence conducted in the style of Yoshiaki Kawajiri’s anime.

Jack Black goes through his familiar comic routine as Po. The one who nails it on the head is Randall Duk Kim who has some of the best passages in the film as he dispenses genteel Buddhist wisdom. As to the Furious Five, they are given so little characterisation that it is only their different animal forms that allows them to be distinguished from one another.