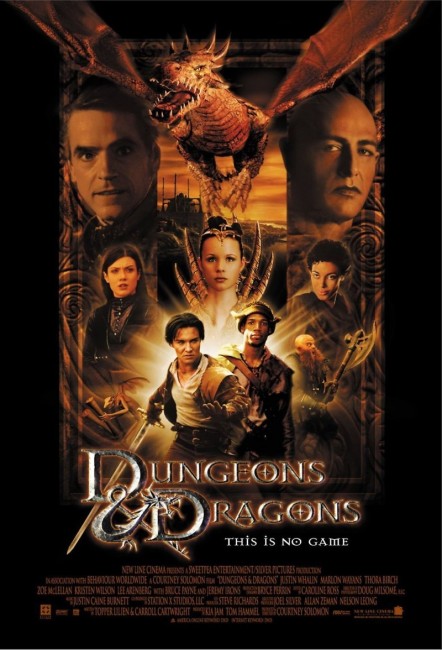 In the kingdom of Ismir, which is ruled by magic users, the child Empress Savina desires freedom and democracy for all her subjects. The evil magic user Profion schemes to unseat Savina and pushes the magic user council to force her to hand over the sceptre that controls gold dragons, but she refuses. Profion’s only hope is to obtain the sceptre that controls the more powerful red dragons. Two thieves, Ridley and Snails, conduct a robbery of the magic user’s school for the hell of it but arrive just as Profion sends the Empress’s Crimson Guard to steal the map that leads to the location of the sceptre. Ridley and Snails flee with the map. Joined by the apprentice magic user Marina and the dwarf warrior Elwood, they set out on an adventure to obtain the sceptre before Profion does.

Dungeons and Dragons was the most well-known among the early-to-mid 1980s fad for role-playing games. (It was originally published in 1974, although what most people are familiar with is Advanced Dungeons and Dragons (1979), the expanded and much more detailed version). Role-playing was a highly inventive form of interactive gaming where players would assume roles – in Dungeons and Dragons, one could play magic users, thieves, warriors, clerics – as well as various races like human, dwarf, orc, elf and so on. They would then be assigned dice roll attributes such as Strength, Intelligence, Wisdom, Dexterity, Constitution and Charisma. The Dungeonmaster (or game controller) would then describe the adventure – “You enter a large cavern – which way do you want to go? You enter a room filled with orcs – do you want to talk, flee or fight?” – and players would choose their actions accordingly, with outcomes being determined by dice rolls.

Dungeons and Dragons‘ scenario was essentially a distillation of J.R.R. Tolkien, Robert E. Howard and Fritz Leiber into a generic module for sword and sorcery adventure. Subsequent role-playing games colonized every sf/fantasy theme imaginable – space opera, superheroes, the post-holocaust scenario, time travel, vampires, cyberpunk, toon adventures, spacegoing Victorians – and adapted numerous literary and filmic series into games – James Bond, Star Wars (1977), the Lensman books, Starship Troopers (1960), Doctor Who (1963-89, 1996, 2005– ), DC and Marvel Comics, H.P. Lovecraft. However, Dungeons and Dragons was the most famous of these. The author remembers many misspent hours of his university years engaged in such campaigns.

Dungeons and Dragons was the inevitable movie adaptation. The poster for the theatrical release lamely promises the obvious notion that “This is no game.” The timing for the movie seems off – it was well over a decade since the D&D/Fantasy Role-Playing fad had peaked and gone. Although there are still some faithful FRPers out there, role-playing has for the most part been eclipsed by the computer game revolution. Of course, the real reason for Dungeons & Dragons at this time is the new fad for epic science-fiction adventure and sword and sorcery that came about with the success of Star Wars Episode I: The Phantom Menace (1999) and sequels and in expectation of The Lord of the Rings: The Fellowship of the Ring (2001) and sequels.

The film has done a fair job of adapting the basic character templates of the game – the thieves, the magic users, dwarves and elves, and some impressive looking orcs in the background. As in the game, these are fairly much cutout archetypes that are never played with any substance beyond their basic templates. The plot is routine – as though it has been built out of a constructor set of scenarios – the evil sorcerer desires power, endangered child empress desires freedom and democracy for all viz The Phantom Menace. As if determined to at least be accurate in regard to its title, there are a couple of dungeons and plenty of dragons. While moderately thrilling, the venture through the trap-laden maze is far too brief, while the journey into the cavern to obtain the sceptre near the end is surprisingly free of perils.

Similarly, there are some dazzlingly impressive dragon effects, although the problem here is the very impressiveness of the effects in themselves. There are so many dragons flying, diving and attacking all at once that the effect is visual overload rather than awe or dramatic excitement. Ditto the impressively CGI created city of Ismir where the animation camera dives and twirls around the elaborately beautiful city towers and bridges so fast and with so much detail that it is impossible to take in and appreciate the artistry.

There seem to be an oddly muted political subtext running throughout the film. As a rule, Sword and Sorcery ends up passively supporting feudal monarchies, albeit highly romanticised ones. Dungeons & Dragons feels like it has been infiltrated by Star Trek politics – The Empress makes earnestly naive speeches about freedom and democracy for all her kingdom. There is also a subtly racist tone of anti-imperialism in much of the casting where all the evildoers are played by Brits – Jeremy Irons (in OTT mode as the chief magician), Bruce Payne (who does the cold, tight-lipped thing he did in Highlander: Endgame [2000] again) and Richard O’Brien as a double-dealing thief.

The company of heroes all seem miscast too. The majority of the heroes – although ranging in age from 18 to 31 – all look to be in their late teens, something that seems to by implication assume (incorrectly) that the audience for Dungeons & Dragons and fantasy is youthful. Despite taking an Associate Producer role, Sean Whalin is wimpy and never projects the strength his heroic role needs. Marlon Wayans is written solely as the comic relief and has no character beyond that. The non-human adventurers – the elf and dwarf – are given so little characterization that they make almost no distinction.

The set and costumes are impressively lavish. The effects are good – there are some cute magic tricks packed away – magic ropes, quicksand carpets, jack-in-the-box dragon illusions, instantaneous portals. It all passes with a sufficient degree of energy and sheer good cheer to be undemandingly likable. It is the sort of film that mid 80s Star Wars copies like Hawk the Slayer (1980) and Wizards of the Lost Kingdom (1984) wanted to be but could never find the budget to do so. The film was universally hated when it came out.