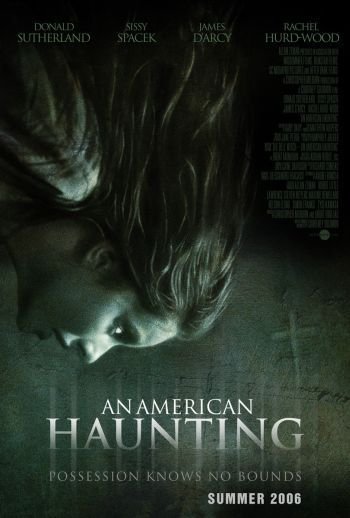 Red River, Tennessee, 2006. After her daughter complains of terrifying dreams, a mother sits down to read a journal that she finds in the attic of the house. The journal was written by Lucy Bell in 1817 and tells of how the Bell family were subject to a terrifying series of supernatural assaults in the house. Lucy’s teenage daughter Betsy repeatedly had the sheets torn off her bed and was dragged across the room and lifted off the floor by the unseen forces. Her husband John believed that a local woman was a witch who placed a curse on the family after John was censured by the church for charging her usurious rates of rent.

An American Haunting was released on the coattails of The Exorcism of Emily Rose (2005) and seemed to be a clear effort to exploit Emily Rose‘s success. Like Emily Rose, An American Haunting was sold with a promotional campaign that played heavily on the fact that the film was supposedly based on a true story. The opening title card made the spuriousl claim: “There is only one recorded case in the history of this country where a spirit caused the death of a human being. The event became the most documented haunting in American history.”

The Bell Witch Haunting was a supposedly true incident that occurred between 1817 and 1821 where the Bell family of Adams, Tennessee was terrorised by a supernatural force. The spirit was alternately described as being friendly, gossipy and malevolent, assaulting young Betsy and eventually striking down John Bell with palsy and possibly poisoning him. The Bell family believed the supernatural agency to be a curse conjured up by local woman Kathe Betts who fell out with John and had him excommunicated from the local church. Later-to-be US President Andrew Jackson supposedly tried to visit the Bell farm and was driven away by the spirit where he is claimed to have said: “I’d rather fight the British at New Orleans than deal with the Bell Witch.”

Although the Bell Witch Haunting has attained a reasonable legend in ghost hunter circles, a closer examination shows that the so-called documentation to support it (which the film readily cites in its credits) is decidedly shaky. The incident first appeared in a single paragraph mentioned in The Godspeed History of Tennessee (1887) and then more substantially in the book The Authenticated History of the Bell Witch of Tennessee (1994) by Martin Van Buren Ingram. For all the claims about the authenticity of the case, there is next-to-no independent documentation from sources outside of these two books. The first independent document appears to be the youngest son’s diary but this was written some 60 years after the incident happened – and this is believed to have been fabricated by Martin Van Buren Ingram anyway. What records there are of the principals involved in the incident that survive from the period when the incidents happened mention nothing untoward.

To its credit, An American Haunting follows the supposed details of the Bell Witch haunting in reasonable detail (certainly far more so than Emily Rose did to the events it was based on). The production designers have even created a house that looks almost identical to the one that survives from the historical illustrations. Although oddly some aspects of the supposed true-life incident are missing – one would have though the filmmakers would have included the scene where Andrew Jackson tried to visit the house. The film’s end claim that the incident was documented in 23 books is also highly spurious. It is irrelevant how many books have been based on this source material – by comparison, there have been dozens of books about Sherlock Holmes and a number that treat him as an actual historical character, but that still does not make Sherlock Holmes a real person. The film is based on one of the books about the Bell Witch haunting, The Bell Witch: An American Haunting (1995) by Brent Monahan, although it should be noted that this book was written a work of fiction.

An American Haunting is the second directorial outing from Courtney Solomon who one genre film was the universally ridiculed Dungeons & Dragons (2000). (Solomon also heads After Dark Films, which makes low-budget genre films). Courtney Solomon generates some occasional eeriness during the attacks on Rachel Hurd-Wood where we see her being lifted up by her hair, bitch slapped by an unseen force and dragged about while clawing her fingers into the wooden floor.

However, there is an irritating attempt on Solomon’s part throughout the film to keep making the audience jump with loud, amplified noises. The entire film feels like attack by soundtrack with loud slams, bangs and shrieks assaulting us at every opportunity. This constant aural overkill destroys what might otherwise have been a series of okay scares. Even something as simple as Donald Sutherland coming up and touching Sissy Spacek on the shoulder is monumentally overblown by the soundtrack. Indeed, the director’s credit feels somewhat misapplied – An American Haunting is more a case of a film that is being run by the sound effects department so much that they should be credited as the real directors.

When it is not the soundtrack, the film’s natural atmosphere is frequently subverted by CGI effects – there is an eerie scene where Rachel Hurd-Wood is swinging on a swing alongside a girl in a red dress but there is nobody there when the teacher looks. A classically handled version of the scene could have worked effectively but Courtney Solomon kills it by the addition of needless CGI effects of the girl dissolving to dust. There is no particular need for this as the real emphasis of the scene comes in the change between Rachel Hurd-Wood’s viewpoint and that of the teacher, an effect that could have been achieved with no visual or optical effects. There is a similar incident with James D’Arcy and Rachel Hurd-Wood trying to escape by coach in the forest only to have it overturned by ghostly forces, where the entire scene is blown up by the special effects department to the point that it detracts from any potential scares.

It also feels as though Courtney Solomon has piled on a host of scare effects that he has copied from other ghost stories – crucifixes flying across the room, independently moving shadows, Rachel Hurd-Wood undergoing behavioural changes, animal noises, exploding windows. However, Courtney Solomon has no feel for the atmosphere, while the concept of subtlety and build-up is alien to him. The results are akin to someone throwing a kitchen sink of effects at you without any rhyme or reason other than a desire to keep getting some kind of reaction. Eventually Courtney Solomon’s pop-up effects reach such a point of overkill that they wash over you with a single lack of affect. There is not even any real plot development to the film – just a non-stop range of pop-up scares and almost nothing else, no surrounding story, no analysis of the characters or the historic context in which they lived.