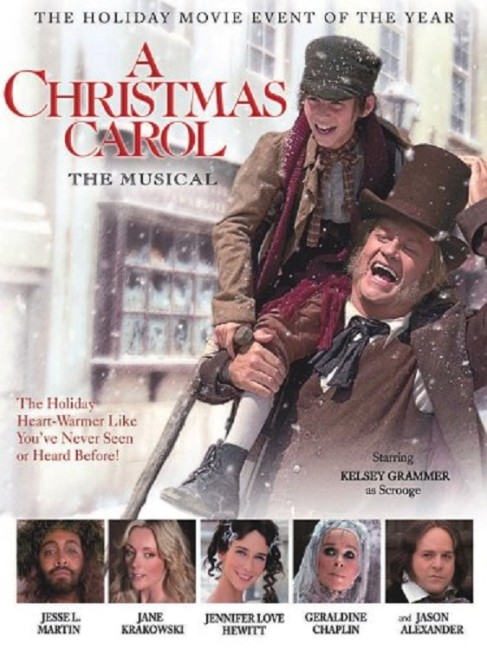 Ebenezer Scrooge is a miser who, as Christmas Eve comes, shouts “humbug” at all good cheer and charity. That night, Scrooge is visited by the ghost of his old business partner Jacob Marley who warns Scrooge of the fate that awaits him in the afterlife if he does not turn from his miserly ways. Throughout the night, the ghosts of Christmases Past, Present and Future turn up and proceed to show Scrooge the things he has missed in the past and the misery of others that he is capable of changing in the present.

There have been so many screen adaptations of A Christmas Carol by now that one settles into watch this version with a certain ennui, wondering if there is anything new that can possibly be wrung out of the story. Over-familiarity aside, this version is worthwhile. It is extremely faithful to Charles Dickens. Which is all the more surprising considering that this version is a musical – some of Alan Menken and Lynn Ahrens’ lyrics actually take dialogue straight from Charles Dickens’ text. There is some inspired dance choreography, most notably the Fezziwig’s Annual Christmas Ball number. Although the number where the Ghost of Christmas Present takes Kelsey Grammer to view a dance between a woman and toy soldiers feels like it has no particular place in the story.

Kelsey Grammer, clearly trying to shake typecasting after the end of his hit sitcom Frasier (1993-2004), plays Scrooge. Disappointingly, when placed up against some of the fine other screen essayals of the role, Kelsey Grammer’s Scrooge ends up being a stagy, theatrical performance. Jennifer Love Hewitt gets second billing behind Kelsey Grammer but it feels like her role as Scrooge’s love Emily has been stretched out of shape in order to cater to her presence. Jason Alexander seems miscast as the ghost of Jacob Marley, where Alexander seems altogether too roly-poly in the part and unintentionally ends up coming out resembling Danny DeVito’s Penguin from Batman Returns (1992).

The production, which was shot in Hungary, has some extremely impressive snowbound sets (even if one may have a few doubts if some of those exteriors would have been found in the real Victorian London).