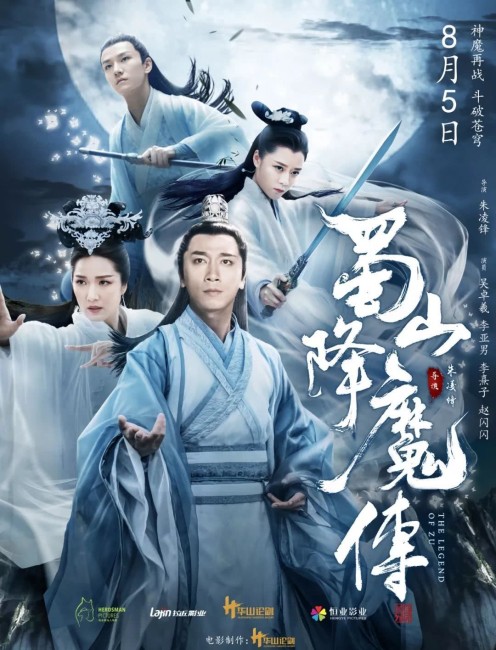 In ancient Shushan, the disciples of Kunlun use the Fantian Mirror to drive back demonic forces but the master is killed. Many years later, the Kunlun disciples have divided into two schools – one comprised of the men, the other the women – who maintain a friendly rivalry as they try to stop demons. However, Xiao He has been having a forbidden relationship with Yuan Youqing from the women’s school. This causes problems as the two are paired to fight in the tournament between the two schools. Demonic forces then bring the master’s body back from the dead under their control.

This is a Chinese-made Wu Xia film. Due to the paucity of English-language press materials about it, I am unable to ascertain if it is intended as a remake, reboot or sequel – or even if it is related at all – to Tsui Hark’s duo of film Zu: Warriors from the Magic Mountain (1983) and its sequel Zu Warriors (2001), the first of which essentially created the Wu Xia film. Equally there was also a Chinese tv series The Legend of Zu (2015-6) and it is not clear if the two of these are connected.

The Legend of Zu is an enjoyable knockabout effort as the modern Chinese Wu Xia film goes. In the 00s, Chinese mainland filmmakers have confidently adopted the Wu Xia genre as their own in efforts such as The Monkey King (2014) and sequels, League of Gods (2016) and others, which create something amazing in their blend of CGI, traditional wirework, lush costumery and production design. The Legend of Zu is more traditional in its moves and not as lushly fantastique as some of the aforementioned entries are but is an enjoyable entry as these films go.

This is evident from the opening battle scene between two massed sides with much in the way of artfully choreographed swordplay, power blasts, a magic flying sword sneaking up on combatants, teleporting moves and a climax where energy is harnessed from the clouds. Thereafter, The Legend of Zu settles into the familiar formula of this type of film. There are two rival schools of martial arts discipline – these seem to have been divided between men and women for no other reason than to provide the film with a forbidden love plot, as well as a number of comic scenes trying to capture the cat spirit during which the women end up upstaging the men.

The film is enjoyable and it is the comic interplay and the martial arts moves that keep it going. There is one standout sequence in the middle where the two romantic leads fly, fight and dance into one another’s arms through the trees of a bamboo forest that ends up having something sweetly romantic to it, a sequence that is undeniably reminiscent of the dance through the treetops in Crouching Tiger, Hidden Dragon (2000) and especially the flight through the bamboo forest in House of Flying Daggers (2004). The film also builds to a great climax with all of the postulants fighting against the resurrected master in a free-for-all combat scene.