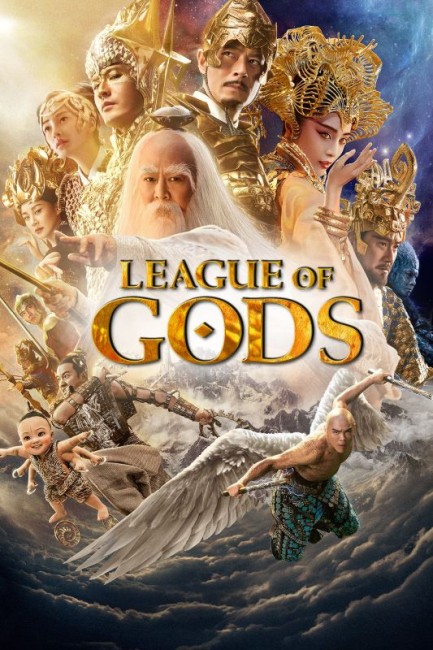 The city of Zhaoge is ruled by King Zhou who allowed his body to be taken over by The Black Dragon in order to have power. His consort is Daji, a deadly fox spirit in human form. The people of Xiji, led by Ji Lei, the last of the Wing People, mount a mission to invade the dungeons of Zhaoge and free the Invisible People. They are aided by the sorcerer Jiang Ziya but during the conflict Daji casts a spell that causes Ziya’s age to reverse every time he uses his magic. Back in Xiji, Ji Lei is commissioned by Jiang to find the Sword of Light, the only thing that will destroy the Black Dragon. He is sent out on a quest to find the sword, accompanied by a strange all-knowing plant creature and the god Naza who has been reduced to an infant but recovers his adult powers throughout the course of the journey. All the while, Daji mounts her sorceries to stop Ji Lei from finding the sword.

In the last few years, since the realisation they were one of the largest box-office audiences in the world, China has been trying to compete with Hollywood. On a regular basis, they now put out epic-sized CGI fantasy spectacles that are made with extraordinarily lavish regard. See efforts such as Tusi Hark’s Detective Dee films, The Sorcerer and the White Snake (2011), The Monkey King (2014) and sequels, and Zhongkui: Snow Girl and the Dark Crystal (2015), among others.

A perfect example of this is League of Gods, which cost over $100 million and yet only earned back $42 million at the Chinese box-office. It did even worse in international release where it grossed a paltry $180,000 in the US. Given how little of a dent that Chinese cinema makes in the international market, can making a film with such a hefty price tag not be considered anything other than a colossal folly?

League of Gods received some bad reviews domestically, which may well have contributed to its poor performance. Contrarily, I liked it. It is a film that is determined to visually dazzle us at every opportunity. The opening sequence alone blows away anything that Hollywood fantasy has done recently – the armies of Xiji advancing on Zhaoge in a flotilla of trapezoidal flying vehicles; some incredibly fast-paced action as the ninja-clad fighters invade the jail area, hopping between the irregularly shaped blocks of the cells; the throne room where we meet Fan Bingbing outfitted in gold jewellery and costumery so lavish it makes the jaw drop; and the climactic escape from the city via the sewers with the fighters surfing out on their shields while engaged in combat along the way. Everything about the film seems determined to grab an audience by the collar and wow them with the sumptuousness of costuming and set dressings, the kinetic pace of the action sequence and the sheer spectacle of the CGI.

There are other epically dazzling scenes – the fight around a desert city with Jacky Heung and Wen Zhang wielding their superpowers against a guardian; the fight for the sword around the ruins of the city of the Winged People, which has been reduced to shattered boulders floating in mid-air; and the massively scaled climactic battle as the forces of Xiji invade the city of Xhaoge. The costuming budget for the film alone must have been astronomical. Every landscape we see seems to have been CGI-retouched into a work of hyper-real beauty. The downside of this is that the consortium of principally Chinese CGI houses are not yet operating at the levels that Hollywood studios are and the CGI effects look obvious. This is something that may well have been hidden by watching the film in 3D but seen flat here it becomes easily apparent.

The other downside of the film comes whenever it slows down from the epic CGI action to tell a story and have character-interaction scenes. The film is based on a book Fengshen Bang (which translates as The Investiture of the Gods) that was written sometime in the 16th Century. This is an epic that interweaves real historical figures and battles with intervention by gods and demons.

Not having a familiarity with the story or historical context when I sat down to watch League of Gods, it was often confusing to work out what was going on. It is never clear who some of the characters are – you are not able to work out if the hero is human or god, for instance – even what type of rules the universe we are in operates according to.

The film proceeds at such a fast pace that there is little room for explanations. The few scenes it slows down are filled with the sappy romance and comic relief among the supporting characters that infect much of Chinese fantasy. The film’s silliest sequence (which should have ended on the cutting room floor) is a side trip to an underwater kingdom where Naza tries to avoid capture by the merpeople by power-pissing and farting them into submission.