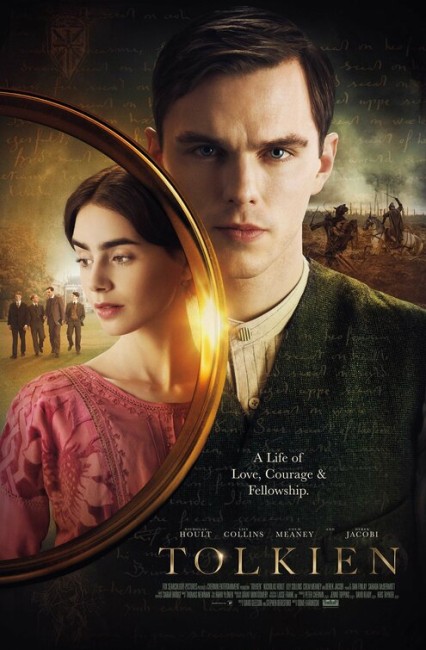 The story of John Ronald Reuel Tolkien who would become the author of The Lord of the Rings. Orphaned at an early age, Tolkien was made a ward of the Catholic priest Father Francis. At school, he and three other friends formed the TCBS (Tea Club Barrovian Society) and would remain firm friends into adult life. Tolkien also formed an attachment to and love for his fellow orphan Edith Bratt but was bade by Father Francis to stay away from her until he came of age. He was greatly upset after he left to go to Oxford to learn that Edith had become engaged to another. Tolkien was about to be sent down from Oxford for an incident stealing a bus but befriended philologist Professor Joseph Wright, an expert in Gothic languages, and made the decision to switch to his class to obtain a scholarship. Wright encouraged Tolkien’s fascination with creating his own languages and writing stories in them. Then came the arrival of World War I where Tolkien enlisted along with the other members of the TCBS.

J.R.R. Tolkien (1892-1973) casts a giant shadow over fantasy literature. Tolkien is the author of The Lord of the Rings – published in three volumes The Fellowship of the Ring (1954), The Two Towers (1955) and The Return of the King (1956). He is also author of the earlier The Hobbit (1937) and the posthumously published The Silmarillion (1977), all set in the venue of Middle-Earth, as well as several other works. Tolkien served as a Professor of English Language and Literature at Oxford from 1945 to 1959. His background was a fascination with languages and he had invented several languages of his own but it is his work as an author for which he is almost exclusively remembered today.

Tolkien bears reasonable faith to the biographical details of J.R.R. Tolkien – his being orphaned at an early age; raised in the boarding house of Mrs Faulkner in Birmingham; his being a ward of a local Catholic priest; the formation of the TCBS; his meeting with and attraction to Edith Bratt – even scenes where they used to throw sugar lumps at people in cafes – and her calling off her engagement to another for him; his fascination with invented languages and mentorship under Professor Joseph Wright; his service during World War I and the death of his friends. The film ends on him writing the opening line of The Hobbit.

The film falls into the same trap that almost any biopic of an author or creative individual does – it serves as less of a story about the subject’s life than it does a series of moments of recognition for an audience where we see them get the inspiration for the key works of their life from the circumstances around them. See also films like My Life as a Fairytale: Hans Christian Andersen (2001), Finding Neverland (2004), Fleming: The Man Who Would Be Bond (2014), Goodbye Christopher Robin (2017), Professor Marston and the Wonder Women (2017) and Shirley (2020).

Thus the film makes parallels between Tolkien and his group of TCBS friends who vow to remain strong no matter what and the Fellowship of the Ring; between the World War I battlefield and armies clashing at Helm’s Deep; between German soldiers with flamethrowers and dragons; between Tolkien and Edith sneaking into a performance of Wagner’s Ring Cycle and them dancing in costumes wielding a ring. We even see the walls of Tolkien’s room covered with elvish script. Dome Karukoski is also constantly cutting away to imagined images of knights clashing or magic lantern figures playing.

On the other hand, you keep asking yourself – is this a portrait of the real J.R.R. Tolkien? It should be noted that the Tolkien estate refused to endorse the film – although they have been notoriously cranky and out of touch, having repudiated the popular interest in the film versions of Tolkien’s work in recent years so whether that is a factor or it is a question of authenticity is anybody’s guess.

The big controversy that hung over the film in release was that it has excised any mention of Tolkien’s devout Catholicism. Nicholas Hoult’s Tolkien is a ward of the church but the sole mention of anything is a scene where he rejects priest Colm Meaney’s plans for him to join the priesthood and acts upset at his request that he should stay away from Edith until he is of age. From this you might gather that Tolkien was someone who rebelled against the church. Whereas in actuality Tolkien was someone who ardently believed, allowed his faith to intermingle with his writing, engaged in regular theological debates with C.S. Lewis (and was even said to be responsible for Lewis’s conversion) and held such a traditionalist position on Catholic doctrinal matters that he opposed the move in the early 1960s to translate the liturgy from Latin to English.

However, this whole side of Tolkien has been excised from the film. Dome Karukoski stated that they filmed scenes showing Tolkien as a Catholic but they did not test well with audiences. The upshot of which is that you have a supposed biography of an historical figure in which one of the key elements and influences on his life is cut for the simple reason that audiences of today don’t get it or aren’t attuned to Catholicism. It reminds of Oliver Stone’s Alexander (2004) where all reference to Alexander’s bisexuality was excised – in other words, accuracy to the historical record altered – because audiences were too homophobic.

Equally, you suspect that if Tolkien were to conduct an accurate depiction of the life of its subject, most audiences would switch off or else find the attitudes he upheld dated or unappealing. Aside from his devout Catholicism, Tolkien was a monarchist but also someone who claimed to be an anarchist and sought the demolition of the apparatus of the British Empire. He also rejected modern industrialisation and sought a simple pastoral life (something represented by The Shire) such that he never drove a car and preferred a bicycle. The other crucial thing is that Tolkien never got the fanbase that The Lord of the Rings found in the 1960s, especially among the youth counter-culture movement. He held a disdain for the hippies and only wanted to shut the door on the fans that came calling wanting to meet him. Not to mention that in most of his dealings, Tolkien actually led a very dull and sedate life and spent most of it buried in academia and/or his writings, tuning out the rest of the world.

All of this makes for an eccentric if not extremely dull figure that the film is dealing with. Wisely, the film chooses to centre on Tolkien’s early life – his service in the First World War, his romance with Edith, the formation of his ideas – rather than the mature Tolkien who found success. On screen, Nicholas Hoult’s Tolkien is simply the cliche of the earnest youth with bright ideas that we know will find success if only he could be discovered by his contemporaries. From the film, you might get the impression that Tolkien was a bright, impassioned man ahead of his time; from the real-life record, you find a dull, conservative academic who preferred to remain in his study and deal with his imagined world rather than come out into the real world.