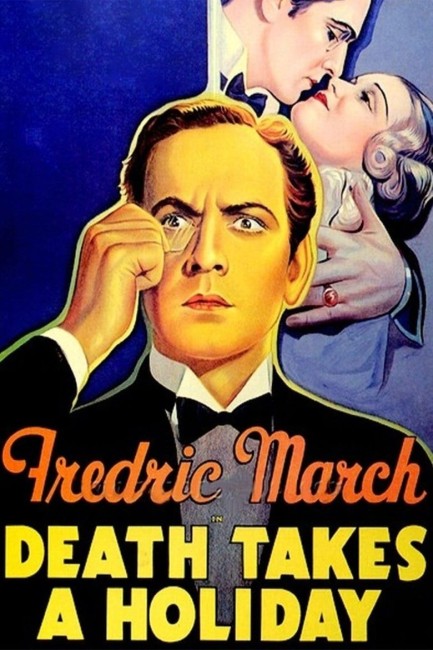 Duke Lambert brings his family and a group of guests to his villa. That evening, Death appears to the Duke, announcing that he wishes to cross over and take on human likeness for three days so that he can understand what it means to be human. He agrees to take on the appearance of Prince Sirki of Vitalba Alexandri, a friend of The Duke that none of the others have met. The Duke agrees but Death’s only request is that the Duke does not tell any of the others his true nature. Soon after, Death arrives at the villa in the guise of Prince Sirki. Welcomed by The Duke, he charms people with his eccentric ways and lack of familiarity with ordinary customs. In the outside world, all deaths have been suspended for the duration. Amidst this, Sirki is drawn to Grazia, one of the guests, and begins to understand the human feeling of love.

Death Takes a Holiday is a classic fantasy film. It is adapted from a play La Morte in Vacanza (1924) by Italian playwright Alberto Casella. This was translated into English by Walter Ferris in a highly successful version that first appeared on Broadway in 1930. (The translation appears to have been fairly close – the result here is the oddity of a film version where all of the clearly American cast members have Italian names). The film version was taken up by Mitchell Leisen, a former costume designer and art director, in only his second film. Leisen never made any other genre films but became a specialist in romances over the next few years.

No doubt due to his background, Mitchell Leisen gives us a film filled with lush interiors. The main problem with the film is that it remains too faithful to its stage play origin and beyond each scene set-piece, it looks stagebound. The dialogue tends to come across as rather forced and postured today but that’s what it was for the era. (The modern more enlightened self also quails at how much pressure that Evelyn Venable is placed under by her family to accept a marriage proposal – it almost becomes an intervention. It’s hard to think that any modern heroine would accept that without it turning into a story arc where she defies her family and sets off to follow her heart).

The treatment is melodramatic but the story comes with a great romantic sweep. The appearances of Death are well staged – there is a particularly evocative scene where he appears to Guy Standing as nothing other than a transparent shadow. The film builds to a fantastic climax where Evelyn Venable is forced to make a choice between staying or departing with Fredric March.

As the personification of Death, Prince Sirki, is Fredric March who was considered one of the top actors of the era. He had just come from an Academy Award nomination for The Royal Family of Broadway (1930) and a win for the title roles in Dr. Jekyll and Mr. Hyde (1931). March gives a comically eccentric (and rather cuddly) Sirki, constantly being amazed at the smallest of everyday things. In his strangely alien pronunciation, you realise after a time that he is actually trying to channel Bela Lugosi.

The play has been remade twice as the tv movie Death Takes a Holiday (1971), a more Americanised version with Monte Markham in the Fredric March role, and the ponderous Meet Joe Black (1998) with Brad Pitt as Death and Anthony Hopkins as the equivalent of the Duke.