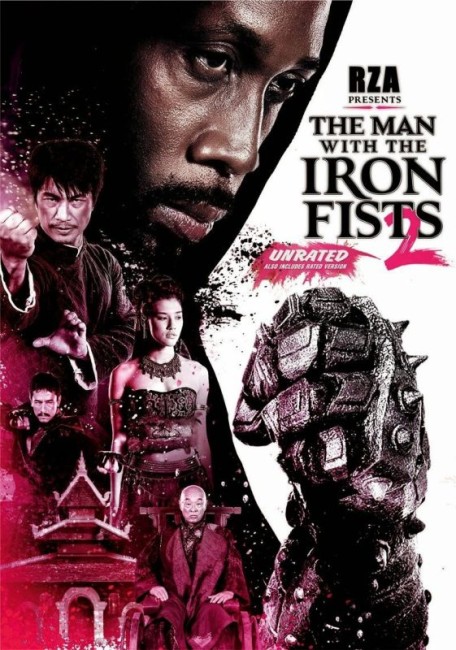 The people of Tsai Fu village have been forced to work in the silver mines of the warlord Master Ho where they are treated as slaves and summarily executed. Many urge an uprising but Li Kung cautions patience. His opportunity comes when his daughter Innocence drags Thaddeus, the legendary Man with the Iron Fists, out of the river after he was wounded in a fight and left for dead. They nurse Thaddeus back to health. When they press Thaddeus to help them, he says he has sworn off warfare and seeks only the path of peace and to go to the nearby Wu Chi Temple so that he can bathe in its fabled Golden Nectar and regain his chi. However, as Master Ho’s bloodthirsty desire for combat challenges even Li Kung to action, Thaddeus is unable to remain uninvolved.

I enjoyed rapper RZA’s The Man with the Iron Fists (2012) more than most other critics. The RZA, the creative force behind Wu-Tang Clan, was a longtime fan of Shaw Brothers martial arts films of the 1970s and this became his opportunity to indulge, he taking the starring role, as well as directing and co-writing the film. RZA was not the best actor but the film fell in around him fairly well. He also had Quentin Tarantino and Eli Roth on board as executive producers (Roth retains the same role here). Though the world probably never asked for it, this is a sequel. Unlike the first film, The Man with the Iron Fists 2 was released directly to dvd and vod rather than to theatres.

RZA still stars and writes. (Oddly, though this is a continuation of the same adventures as before, the character now has a different name). Crucially, RZA has handed the directorial reins over to a seasoned action movie veteran, South African-born Roel Reiné, who has made other films such as Drifter (2008), Deadwater (2008), Death Race 2 (2010), The Lost Tribe (2010), Death Race 3: Inferno (2012), The Scorpion King 3: Battle for Redemption (2012), Dead in Tombstone (2013), The Condemned 2 (2015), Hard Target 2 (2016) and Dead Again in Tombstone (2017). The downside of this is that Roel Reiné, is such a hack director – most of his other films have consisted of sequels to other people’s films – that you cannot help but think he has doomed the series to a B-budget ghetto. It should be noted that, unlike the first film, The Man with the Iron Fists 2 lacks any high-profile names such as Russell Crowe and Lucy Liu among the supporting cast. Nor for that matter does the film have Corey Yuen, the legendary Hong Kong action director, supervising the fight scenes this time.

When it comes to the action sequences, Roel Reiné certainly gives The Man with the Iron Fists 2 a polish that RZA only seemed to stumble towards in the first film. On the other side of the coin, you never get the impression that Reiné is the fanatical martial arts fan that RZA is. As a result, the action scenes move slickly but there is nothing to them beyond that. You never finish watching the film with one sequence that sticks in your mind with any kind of wow factor – all of the fight scenes just blur into the same generic sameness. Certainly, there is the bizarreness of the climactic scenes where RZA manages to cast a set of iron legs for Cary-Hiroyuki Tagawa in the course of a single night and then immediately attaches them – where you would expect the iron would still be so hot that it would charbroil his skin – and then immediately after Tagawa is up and walking on them – paraplegics usually take some months to adapt to the use of prosthetic legs – and leaping into action where he somehow has the strength to jump with cast iron legs, not to mention dive into a river and seemingly swim despite the massive weight so much iron would have.

RZA still has the same bland non-acting presence. His part here is further undermined by the fact that the script has him copying David Carradine’s Kwai Chang Caine in tv’s Kung Fu (1972-5) and choosing the path of the peaceful warrior. Thus fully half of the film is crippled by the fact that its hero has chosen the task of not engaging in action – it is not until after the one-hour point that he enters back into the fray, for instance. Try as he might, RZA comes across as dopey throughout. In one scene, Pim Bubear comes to him and makes a heartfelt plea to take a stance against her father’s passivity, where RZA’s only response to the situation is a lazy shrug “I’m sure he had his reasons,” which, given that we are talking about the murder of her uncle, cannot help but make him seem like an insensitive jerk.