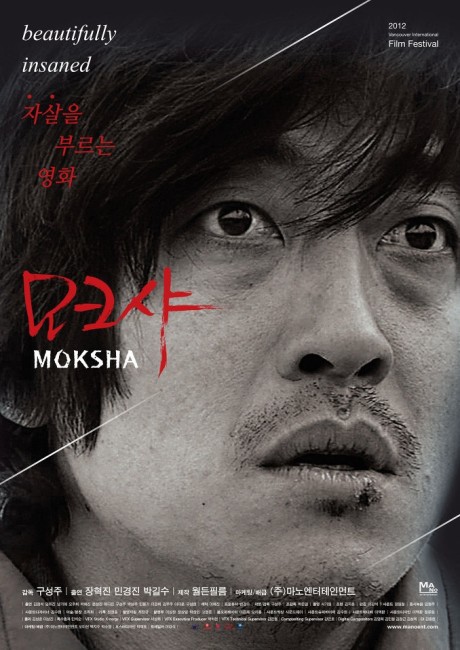 A man wakes up to find he has been imprisoned in the middle of a park by a chain around the ankle. Starving and freezing, he begs for help from numerous passersby that include children, brides on their way to their wedding, Buddhist monks and ghosts of the dead. Gradually, his memories start to come back and he realises his situation pertains to how he took out a risky financial loan to cover his debts.

Moksha – Or the World and I, How Does That Work? is a real head-scratcher that turned up at the 2012 Vancouver International Film Festival. You have no idea what the film is going to be. The central premise of the character chained up and forced to confront his guilt resembles the basic premise of Saw (2004), while the idea of the amnesiac character forced to puzzle over his life to discover some clue that will impliedly help him gain his freedom makes you think of a missing memories conceptual puzzle film like Memento (2000) or Oldboy (2003). Maybe if you want the soundbite, you could consider Moksha to be Saw reconceived along the lines of a Theatre of the Absurd work like Samuel Beckett’s Waiting for Godot (1953) or the stories of Albert Camus.

You could also compare Moksha to a film like Buried (2010) – they have a near-identical plot but tell it at almost opposites of one another. Where Buried featured Ryan Reynolds trapped in a coffin trying to find a way out, Moksha features its hero chained up in the open in a park and trying to escape. The principal difference between the two is that Buried is a thriller, whereas Moksha is more concerned with being an allegory. The protagonist tries to escape, get something to eat, get someone to help but the film is less concerned with his physical plight than the characters he meets throughout.

The characters all seem representatives of some facet of life – the self-obsessed bride, the monk (played by director-writer Koo Sungzoo), the thief, the suicide, even the South Korean equivalent of Edgar Allan Poe (who is apparently present because Poe is Koo Sungzoo’s favourite author). The lead actor certainly runs a gamut of emotions in his performance – even being required to what looks like actually take a dump in the park and capture, defeather and eat a pigeon. In one of the film’s more amusing moments, he at one point breaks the fourth wall and begins to wonder if he is trapped in a low-budget film having to endure such absurd conditions.

The Vancouver International Film Festival program notes compare Moksha to Cube (1997). If that is the case, then it is a conceptual puzzlebox film that comes without a resolution. The film reaches an ending with no explanation of how the protagonist ended chained up in the park or why. Indeed, after such strenuous struggle against his plight, the film has him anticlimactically freed without any explanation and simply lets him walk away. The film also suggests throughout that he has amnesia (although at other times does not) and there are several flashbacks to his prior life where we see that he did something regarding taking out a high-risk loan to cover his debts and that this appeared to cause his wife to commit suicide (and maybe even himself) – although much of this is not clear, nor how any of it relates to his plight.

At the end of the film, director/writer Koo Sungzoo was present for a Q&A session where he explained that he was trying to make a film about the existential misery and desperation of the human condition, citing his choice of the title Moksha (from the Sanskrit word meaning liberation and release, which is used as a concept in Buddhism and Hinduism referring to the soul’s eventual attaining freedom from the body). When asked what message he would want audiences to go away with, Koo surprisingly replied that he would wish them to think differently about suicide.