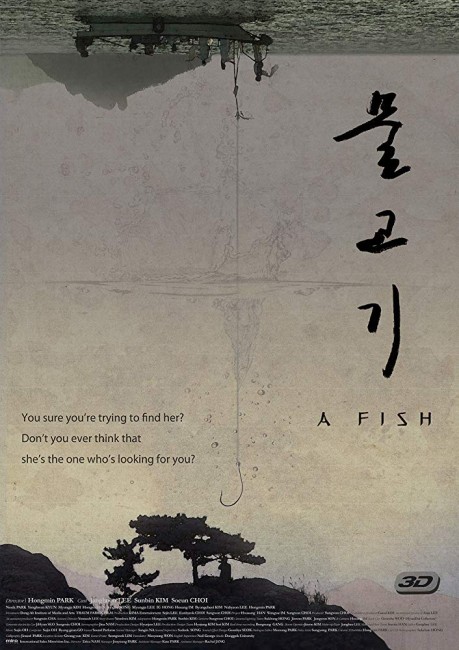 Professor Lee has abruptly walked out on his class and travels to Jindo Island in search of his wife. He has hired a private detective who has traced her to where she has joined a shamanistic religion on the island. Lee finds her and is witness as she engages in a series of rituals at sea intended to raise spirits of the dead. Things then become strange as Lee and his wife find themselves inhabiting one another’s bodies and a series of baffling events play out.

A Fish is a directing/writing debut for South Korean director Hong-min Park. The film has a potentially interesting lead-in. An academic (Jang-hoon Lee) has abandoned his class, has hired a private detective and travels to Jindo Island in search of his wife who has absconded to become a shaman. Jang-hoon Lee’s professor seems the type of overly serious individual whose plot arc is to have his tightly bound tie ruffled. He is accompanied by a cheerful ruffian private detective (Sun-bim Kim) who rather too readily beats people up. There are cryptic happenings at a cafe that has a fog-laden interior where an old lady gives the professor warnings that bad things will befall him. We arrive at the island where the professor joins his wife (So-eun Choi) as she engages in a ritual at sea.

It all seems deeply, although not terribly interestingly, mysterious and cryptic. The 2012 Vancouver International Film Festival program notes tried to build the film up with expectations of something like David Lynch’s Twin Peaks (1990-1), although it falls short of this by an exceedingly wide margin. Hong-min Park displays a bland uninteresting visual style that does little to build a sense of mystery. The sole scene that stands out might be the one in the cafe, which does generate a minor degree of strangeness. A Fish was originally shot in 3D (although was screened flat at the festival) and it is possible that this provided much that is not evident in the film.

Shortly after the shamanistic ceremony, things become entirely baffling. The husband and wife appear to change bodies – he becomes her and vice versa several times. It is later stated that he is possessing her body. In the Q&A after the film, Hong-min Park explained that the shamanistic ceremony being conducted by So-eun Choi was to raise her husband’s spirit from the dead (based on a traditional ceremony that is conducted on the real Jindo Island) and that he has been dead all along (although Park would not clarify at what point in the film the husband ceased to become living or whether the private eye was also dead, much to the audience’s confusion).

Interspersed throughout are scenes with two fishermen who reel in a fish that starts talking to them in a croaking voice and much philosophical speculation that that they are like fish going up to the hook. Later they lose their memories and even any sense of their identities. According to Park, they are allegorical representatives of each of us and that fish and hooks are a metaphor for our existential plight and the appeal of the afterlife, although it is not clear why this also involves talking fish or amnesia.

Hong-min Park next went on to make Alone (2015), another film about existential confusion as am amnesiac man wanders a maze of back alleys, which is slighly better made but no more coherent.