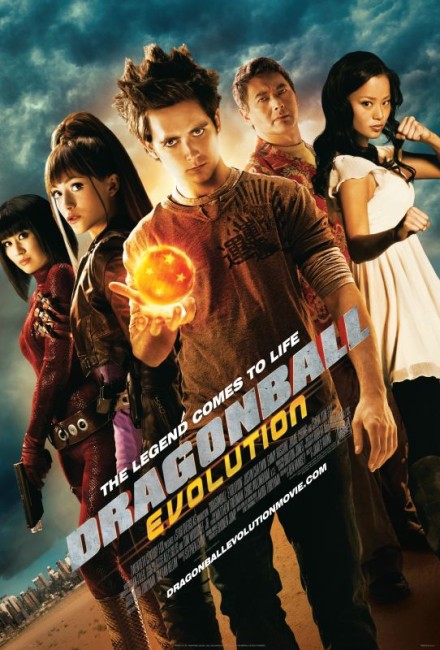 Two thousand years ago, seven sorcerers defeated the evil alien warlord Lord Piccolo and created the Dragonballs to banish him. In the present day, the teenager Gozu is trained in martial arts by his grandfather. As Gozu’s eighteenth birthday nears, his grandfather gives him one of the Dragonballs. Gozu returns from a school party to find that a resurrected Piccolo has killed his grandfather, searching for the Dragonball. Gozu meets the teenage girl technical genius Bulma, who owns one of the Dragonballs. They set forth to find all seven balls – the only means of banishing Piccolo again. They are joined by the grandfather’s martial arts trainer Master Roshi, the mercenary-minded Yamcha and Chi Chi, Gozu’s schoolyard object of desire. As the fate of the Earth hangs in the balance, Gozu begins to discover the true powers inside himself.

Dragon Ball was a manga series created by Akira Toriyama and published in the Japanese magazine Weekly Shonen Jump between 1984 and 1995, later released in 42 volumes. The manga follows the hero Son Goku, along with his female companion Bulma and various others, on a quest to find the seven mystical Dragon Balls. The epic sized canvas of the story follows Son Goku from childhood to adulthood, through his training in martial arts and discovery of his alien origins, as well as battles with various super-villains. The manga was later adapted into three different anime tv series Dragon Ball (1986-9), Dragon Ball Z (1989-96) and Dragon Ball GT (1996-7). Dragon Ball Z is the most well known to Western audiences – although to add to confusion, the first series gives the characters different names in English language translation. There have been a further 17 Dragon Ball animated films, one OVA serial, as well as four tv specials produced as part of Dragon Ball Z and Dragon Ball: The Magic Begins (1989), an uncredited Chinese-made live-action copy of the series. The Dragon Ball saga has a huge popularity in Asian countries, with interest even sprawling over to videogames and collectible trading card games.

Dragonball: Evolution is an American-made live-action film version of the anime. Dragonball: Evolution comes from James Wong, the Hong Kong-born director best known for his collaborative work with Glen Morgan. Wong and Morgan began work as a writing partnership, delivering some of the best episodes of tv series such as The X Files (1993-2002, 2016-8) and Millennium (1996-2000), before going onto create the excellent war in space tv series Space: Above and Beyond (1995-6). These pegged the duo as a highly talented partnership and they carried that success over onto movie screens with a number of works as directors/producers including Final Destination (2000), The One (2001), Willard (2003), Final Destination 3 (2006) and Black Christmas (2006).

It is hard to describe what a dismal experience that Dragonball: Evolution is. A more accurate and honest title might have been Dragonbollocks: Evolution. Never having watched more than scanty pieces of the original Dragon Ball anime series, I do not feel qualified to discuss the intricacies of the ways that the film trashes the anime and manga sources in any detail.

Needless to say, the differences become immediately apparent when it comes to the look of the characters. In the original, Goku was a short kid with a cross-eyed stare and a hairstyle that looked like a mutant starfish atop his head; here Goku becomes a standard good-looking American teen whose distinctive hairstyle amounts to no more than Justin Chatwin with a mousse-spiked cut. Emmy Rossum is a pale shade of the animated Bulma, notably missing in her distinctive turquoise hair. In the manga/anime, Master Roshi is an old man who becomes sensei to Goku, whereas here he has been recast as a middle-aged Chow Yun Fat who gives a performance that seems to be trying to channel Jackie Chan. A substantial number of the other supporting characters from the manga and anime have simply been written out, in particular most of the non-humanoid characters that would have required more complex effects.

Dragonball: Evolution feels like a film where nobody seems to have cared what they were making. It is indicative that the script was an old one that had been sitting in the studio slush pile and was only put into production when the 2007-8 Writers Strike prevented the requisitioning of new scripts. There is certainly little effort being made by James Wong whose direction fails to evoke a single moment of genuine (or even ersatz) feeling, dramatic excitement or style. Everything that happens in the film feels like a third-hand pose or cliche. The martial arts sequences are completely routine, while the visual effects team conjure various energy displays and power blasts that manage to wash over one with all the substance of a glitterball in a nightclub. The plot seems only to exist to stitch one action scene and the next together with the most minimal effort.

Even the cast seem indifferent to the show that is going on around them. I was reasonably impressed with Justin Chatwin in The Invisible (2007), while Emmy Rossum was one of the few good things about The Phantom of the Opera (2004), but here they are no more than kids filling routine roles. Justin Chatwin’s apparent indifference to the role is surely never more than signalled by the fact he (and James Wong) make zero effort to show Goku as the teenage nerd that he is frequently spoken of as being. This amounts to no more than Chatwin letting his pretty features pout momentarily as he turns away from bullies before turning to trash them and their car in a cool martial arts display. South Korean actor Joon Park gives a loud and annoying performance as Yamcha.

Dragonball: Evolution is the point that one can say they have finally given up on James Wong after holding out for promise that he and Morgan showed as a result of their tv work. The film is produced by Hong Kong director/writer/star Stephen Chow – the one-man band behind amazing works like Shaolin Soccer (2001) and Kung Fu Hustle (2004) – and you wish that someone had allowed Chow the directorial control of the film (as was rumoured at one point) as, hackneyed and trashed a script that the film has, you could have guaranteed that Chow would have made something amazing out of it.