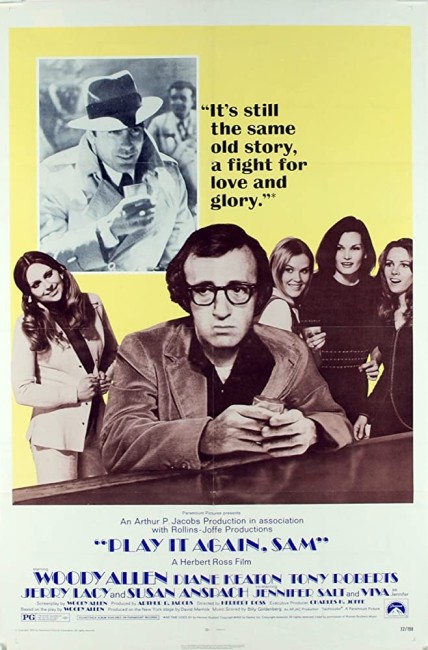 Neurotic movie buff Allan Felix becomes depressed after his wife Nancy leaves him. His two best friends, Dick and Linda Christie, try to get him out of it and to find someone else but Allan’s klutzy neuroses foul up every attempt. Allan then realizes that he has fallen in love with the equally neurotic Linda. As he tries to woo Linda, the spirit of Humphrey Bogart steps in to tell Allan how to succeed with ‘dames’.

Play It Again Sam is an early Woody Allen film, one that Allen adapted from his own 1969 play, which had also starred himself and Diane Keaton in the roles they play here. Although Woody Allen had been directing films since What’s Up Tiger Lily (1965) and his own work since Take the Money and Run (1969), Play It Again Sam is one of the few occasions he has allowed himself to be directed by another director, in this case Herbert Ross, who also made the likes of The Seven Per Cent Solution (1976), The Goodbye Girl (1977) and Steel Magnolias (1987). Play It Again Sam was also the only time up until the 1990s that Woody Allen did not shoot in his home turf of New York City but instead in San Francisco.

Although it is sometimes not regarded as one of the canonical Woody Allen films, Play It Again Sam is in all ways a Woody Allen film and just as funny. As usual it is a witty run through Allen’s neuroses and ritual on-screen self-humiliations. Indeed, Woody Allen has never done his neurotic hang-ups about desirability and dating schtick funnier than he does here – the film is at its most side-splitting during the string of disastrous dates that he gets set up on.

The film’s central joke is the contrasting of Allen’s perpetual angst and neurosis up against the gruff macho of Humphrey Bogart’s man’s man with hilarious results. (Woody Allen would later returned to the idea of characters from bygone cinematic eras stepping into reality in The Purple Rose of Cairo (1985), while Midnight in Paris (2011) also has similar romantic advice from man’s man Ernest Hemingway). The ending appropriately conducts an elaborate, if downbeat, restaging of the climax of Casablanca (1942).