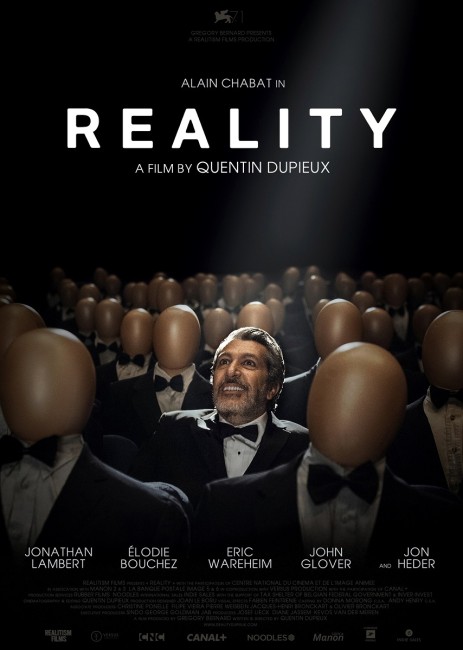 Reality is out with her father on a hunting trip. He shoots and brings home a hog but as Reality watches him gutting it, she is puzzled to see a videotape fall out of its stomach. Even though her father does not see anything, she becomes determined to play the tape. Jason Tantra is the cameraman on a tv cooking show, hosted by Dennis. Dennis is certain that he has severe eczema all over his body, something that is causing him to noticeably itch on air, although nobody else can see the rash. The story about Reality and the videotape is actually the plot of a film being made by Zog. The rushes are being screened for producer Bob Marshall. Marshall interviews Jason for the film he wants to make called ‘Waves’ about a tv broadcast that causes people’s heads to explode. Marshall agrees to fund the film but only if Jason can find the right groan for the victims. Jason’s wife Alice, a psychologist, is treating Henri, who is Reality’s school principal, for a persistent dream in which he is driving an open-top Jeep while wearing women’s clothing. Jason becomes stumped in trying to find the right groan, He goes to see a movie – only to find it is the film he is trying to make. He then finds that he is encountering doubles of himself and that his dreams keep blurring into real-life.

French director/writer Quentin Dupieux made an appearance seemingly out of nowhere with his third film Rubber (2010), a parody of a monster movie featuring a killer tire where the film turned into a completely demented meta-fiction that wound in the audience watching it and kept screwing with conventions. The film became a word of mouth hit at international film festivals. Before that, Dupieux has maintained a career as an electronic musician under the name Mr Oizo and made a couple of other films that nobody saw. He subsequently went on to make Wrong (2012), Wrong Cops (2013) and Reality and the subsequent Keep an Eye Out (2018), Deerskin (2019) and Mandibles (2020) in the same gonzo surreal style. It should be said that Dupieux’s subsequent films have never quite hit the same heights as Rubber, either in terms of cleverness or in their audience response, and at most seem to produce a puzzled “huh” from people watching.

Reality seems like a more obscure version of Pedro Morelli’s Zoom (2015), which had three parallel storylines in which each was one being created by the person in another story. There is the same sense here of the people making films and the characters within them weaving together in a bizarrely complicated meta-fictional puzzle. Try to follow what happens – young Kyla Kenedy puzzles over a videotape she finds in the stomach of a boar shot by her father; her story is a film being made by John Glover’s director, which is being shown at a screening where it is watched by producer Jonathan Lambert; Lambert interviews Alain Chabat about the film he wants to make; Chabat’s wife (Elodie Bouchez) is a psychologist whose patient (Eric Wareheim) has a dream about driving while cross-dressed; Wareheim is also the school principal of Kyla Kenedy who threatens to tell everyone that she saw him dressed in women’s clothing when he tries to confiscate her videotape; Kyla Kenedy also sits watching a cooking show over breakfast – the same one on which Alain Chabat works as a cameraman.

All of these storylines play off each other in bizarrely quirky ways. The most time is given over Alain Chabat in his efforts to find the perfect groan. At one point in the middle of the film, he goes to relax from his efforts by sitting down to watch a movie in a theatre only to find the film he is watching is the exact one he wants to make – when he goes to call producer Jonathan Lambert about it, he finds in a touch that reminds of Robert Blake’s scene in David Lynch’s Lost Highway (1997) that he is already there pitching the idea. In another scene, Kyla Kenedy wakes up from her dream wanting to watch her videotape only to find director John Glover in the room urging her to go back to sleep.

Multiple versions of Alain Chabat turn up all over the place – Jon Heder’s cooking show host even thinks he is one of them – and at one point all go to sleep at the same time. Reality does eventually watch the videotape and this turns out to be about cameraman Alain Chabat as he signs into a psychiatric hospital. Glover screens the scene of her watching the tape for producer Lambert and they are watching it just as Chabat calls Lambert with another problem (as he can seen doing so up on the screen as they sit watching). A nurse comes to jab Chabat in the butt with a needle, which Lambert then announces is the perfect groan and greenlights his film.