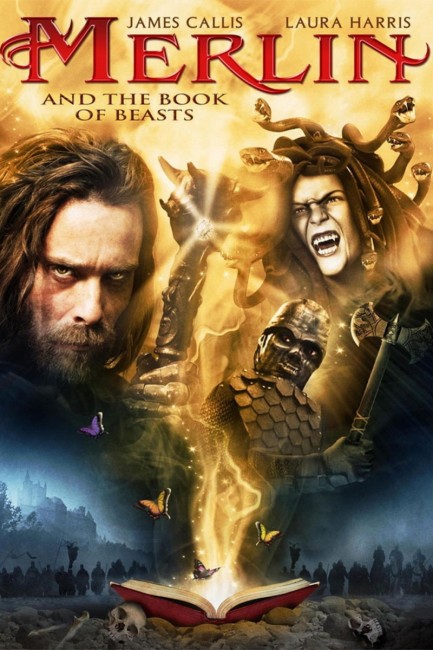 A group of knights enter the forest in search of Merlin the Magician, seeking his help. Merlin traps one of the knights only to find that beneath the helmet is a woman who introduces herself as King Arthur’s daughter Avlynn. She pleads with Merlin to aid them against a new threat – that of The Arkadian who has overthrown Camelot with the aid of the Book of Beasts, which contains magical creatures imprisoned within its pages that can be released with a spell. Merlin declines to join them but later changes his mind. They set out on a quest in order for Avlynn to retrieve Excalibur and reclaim her birthright. All the while, their journey is beset by creatures that The Arkadian unleashes from the book.

Merlin and the Book of Beasts was one of the numerous B-budget fantasy films churned out for the Syfy Channel in the mid-late 00s, all riffing off the renewed popularity of fantasy adventure on the screen following the success of the Lord of the Rings films. Merlin and the Book of Beasts falls amid a growing industry of sequelia to the Arthurian Legends. King Arthur is out of the picture but the film features Merlin, Mordred, Galahad and Tristan, along with Laura Harris as Arthur’s supposed daughter.

The film has clearly been produced as a piece of product for tv consumption without much effort beyond the basics. We get a series of adventures, which means the group encountering assorted mythic creatures produced by the Book of Beasts every so often consisting of a zombified knight and a trio of gorgons (which are let down by cut-price CGI). The pace tends to plod when what you wanted of the film was for its monstrous encounters to soar rather than seem like the random encounters in a Dungeons and Dragons (1974) game and its romance to come to life rather than feel like a perfunctory plotting element.

The processed nature of the film is surely evident in the climactic scene that manages to improbably wrap all of the plot strands up within a single scene that requires the turning of the tables by the captured party, the defeat of the villain, two deaths, the killing of the remaining gorgon (as it is seducing one of the knights) and a realisation of love.

The film’s major recognisable name was James Callis, then just coming from his most famous role as Dr Gaius Baltar on tv’s Battlestar Galactica (2003-9). For some reason, Callis chooses to play the entire role through a silly accent that makes Merlin look as though he is some kind of wild-eyed Old Testament prophet, albeit while trying to deliver dialogue just after having quaffed a bottle of whisky straight. Opposite him is Laura Harris who made a splash in The Faculty (1998) and one of the seasons of 24 (2001-10) but seems to have faded away in the latter half of the 2000s. She makes for an okay but far too quiet Avlynn.