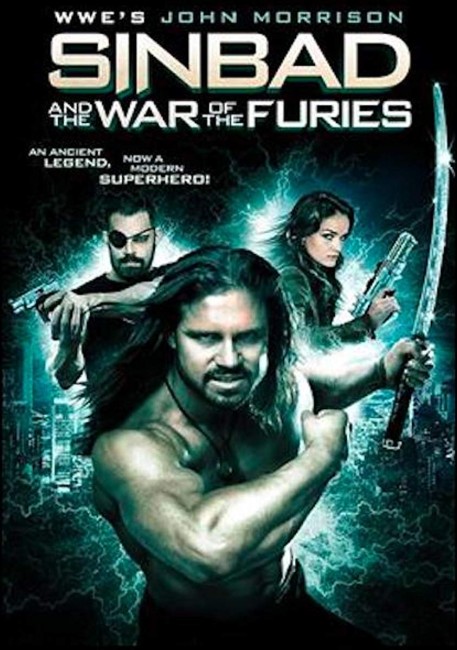 In the present-day, Sinbad is a descendent of the great adventurer. However, this Sinbad is disgraced academic who has turned tomb-raiding thief. He finds a cave in Mexico from which he retrieves an ancient emerald known as The Heart of Medusa. He is pursued by Russian mobster Manta who wants the stone but makes a getaway. Sinbad sells the emerald to Ace Aded and learns of its mythical powers. At the same time, Sinbad runs into his old girlfriend Jax, the daughter of his former professor, who was hired to help Manta find the treasure and the two renew their relationship. That night, Sinbad is visited by what Jax’s identifies as the three Furies who are in search of the Heart. With the money from the sale, Sinbad is able to buy a new boat and they set sail for L.A. to warn Ace. All the while they are pursued by Manta and his men, wanting to get the Heart, which holds the potential to be a deadly weapon.

Among these, The Asylum have also offered up a bunch of cheap adaptations of works that were in public domain, all designed to piggyback on the release of high-profile studio versions with the likes of Sherlock Holmes (2009), Grimm’s Snow White (2012), Hansel & Gretel (2013), Jack the Giant Killer (2013), Hercules Reborn (2014) and Sleeping Beauty (2014). In their ever-increasing search for corner-cutting measures, we have seen several of these public domain adaptations transplanted into the present-day with the likes of War of the Worlds (2005), Journey to the Center of the Earth (2008), 3 Musketeers (2011) and King Arthur and the Knights of the Round Table (2017). Indeed, this is not even the first time that The Asylum have offered us up a contemporary Sinbad adventure, they having previously done so with The 7 Adventures of Sinbad (2010), although that film does not appear to be related to Sinbad and the War of the Furies.

The contemporary approach grates from the opening scenes here where we see Sinbad using a cellphone and making an escape in a Jeep. The Furies appear to Sinbad in a standard motel room and when he sets forth on his journey it is aboard a regular yacht heading towards L.A.! Indeed, while Sinbad is synonymous with exotic adventures, none of the locations for the film here have even been shot outside of Los Angeles. There is a vague attempt made to approximate some of these locales – Sinbad ventures to a bazaar, which is an open-air market in what an on-screen credit tells us is L.A.’s ‘Jewellery District’, while the arrival at Wayne Crescendo Ward’s mansion is meant to resemble a sultan’s palace.

This does result in some laughable howlers – Sinbad describes his scimitar as having been handed down since the time of the real Sinbad, although when we see it it is perfectly unmarked as though it had just come from the shop brand new. Later Jamie Bernadette comes across a standard set of hardback books in Wayne Crescendo Ward’s home and comments: “These were lost back when the Library of Alexandria was burned” (something that occurred in the First Century B.C.E., about 1500 years before William Caxton ever created the printing press, let alone the notion of the bound book ever existed).

The disappointment of the film is that it is so cheaply produced that The Asylum have even skipped any of the creature effects that we had in the Ray Harryhausen Sinbad films – The 7th Voyage of Sinbad (1958), The Golden Voyage of Sinbad (1973) and Sinbad and the Eye of the Tiger (1977) – and the most fantastical the nemeses ever get are the Furies who are no more than a trio of actresses with mildly exotic makeup.

One of the main problems with Sinbad and the War of the Furies is the casting of former WWE wrestler John Hennigan in the title role – he was also Hercules in their Hercules Reborn. Sinbad has usually been portrayed as someone lithe on their feet, a nimble swordsman. With Hennigan though, what we get is Sinbad that looks like a pro-footballer. We’ve had worse castings in the role before – remember bodybuilder Lou Ferrigno in Sinbad of the Seven Seas (1989) – but what kills the part is Henningan’s refusal to take it seriously and the insertion of a series of glib, contemporary one-liners. “You’re just a lousy thief,” Jamie Bernadette accuses him. “I prefer undercover entrepreneur,” Hennigan quips back. He refers to the Furies as “Charlie’s Pissed Off Angels,” or jibes “Maybe they have part time jobs as telemarketers – that’s why they’re pissed-off all the time.” Or “I don’t need some Industrial Light and Magic ripoff making fun of me.”