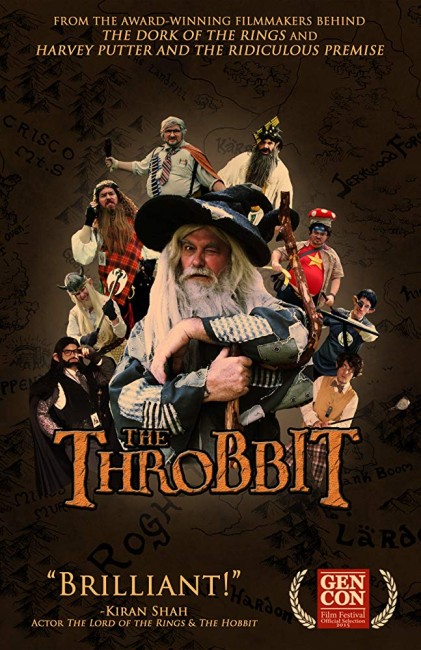 In Bug End, the throbbit Bobo Buggins is approached by the wizard Randolf and seven dweebs who need a thief to join them on a mission to retrieve the dweebs’ hereditary treasure beneath Silicon Mountain. Bobo refuses but is shanghaied into joining the party. Along the way, they encounter many things, including goblins, fearsome Nags, shapeshifters, elfsies and a town of rednecks, before arriving at Silicon Mountain. There Bobo is sent in alone to confront Smag the fearsome drag queen that terrorises the area.

The Throbbit is a fan-made parody of Peter Jackson’s The Hobbit trilogy – The Hobbit: An Unexpected Journey (2012), The Hobbit: The Desolation of Smaug (2013) and The Hobbit: The Battle of the Five Armies (2014). Timothy Alan Richardson is an Indiana-based filmmaker and film festival director. Richardson had previously made the fantastical Revelations (1997) and the mundane dramas Bloodlines (1998) and Kill the Messenger (2003), although none of these attained any notice or wide distribution. Richardson however discovered his stride with The Dork of the Rings (2006), a parody of the Lord of the Rings films, which gained reasonable profile among the fan community, Harvey Putter and the Ridiculous Premise (2010), which likewise sent up the Harry Potter films, and the subsequent Vulassic Park (2018).

The Throbbit‘s sole note of distinction is that Richardson has befriended dwarf actor Kiran Shah, who worked as a stuntman on The Lord of the Rings, and who makes a one-scene cameo here (for which he receives top billing). The film was made with a miniscule budget (the Kickstarter was only for $6500) and mostly crewed and acted by fan amateurs.

The result is not unakin to a filmed version of Harvard Lampoon’s Bored of the Rings (1969) – Timothy Alan Richardson and co have simply re-run the basic plot of The Hobbit and come up with a series of parodies of everything that happens. The results are excruciating. Everyone is outfitted in none-too-convincing costumes and even less convincing fake beards. All the performances are delivered in a series of fruity quavers, falsettos and the eye-rolling innuendos of amateur pantomime performances, something that very quickly begins to wear on one’s nerves. Everything is also overlaid with a lot of fannish and computer geek jokes – one of the characters even goes through the entire film with a computer keyboard attached to their head. Probably the one thing that The Throbbit has in its favour is that it condenses a horribly bloated trilogy back down to the length of a single film, one at which The Hobbit feels more natural being told.

The interpolations are fascinating to watch in their bizarreness for which read awfulness. The three trolls from An Unexpected Journey do Three Stooges impressions, the spiders in the forest are replaced by three lost nerds dressed in Spider-Man costumes. The party come to the elven stronghold, which is a parody of an internet operation, and meet the Gooblin King (Ken Dusek) who stands up and does a really bad song parody of David Bowie’s Let’s Dance (1983) called Let’s Search.

The film is at its most mind-bogglingly bizarre during the scenes where it clearly recognises that it is incapable of competing with Peter Jackson’s effects budget and comes up with its own inventive solutions. Thus, instead of the group being saved by the eagles, they are saved by giant fluffy puppy toys flying in to the rescue. The encounter with Smaug is changed so that the dragon becomes a drag queen who sings a parody of Abba’s Dancing Queen (1976) entitled Dragon Queen and then flies about torching a village of rednecks for not accepting her.