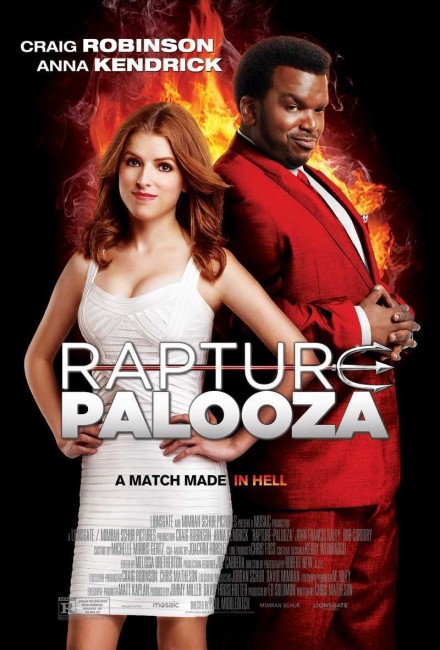 The Rapture has occurred and all the faithful believers have been bodily taken up to Heaven. In the aftermath, those left behind are trying to deal with annoying plagues of taunting insects and crows, as well as burning rocks falling from the skies. The Anti-Christ has emerged in the person of politician Earl Gundy who insists on being called The Beast. Earl has poisoned everybody in the White House, taken command and started randomly nuking cities around the world. In Seattle, Lindsey Lewis and her boyfriend Ben House are trying to hold it together amid the chaos. They makes plans to go into business with a sandwich cart only for the cart to be destroyed by a burning rock. Ben’s father works as security for The Beast and they reluctantly accompany him to work to see about getting jobs there. Instead, The Beast becomes fixated on Lindsey. He insists that she be his wife and announces that he will kill everybody she knows unless she agrees to marry him. Lindsey and Ben read The Bible and realise their only hope is to attempt to follow its instructions and come up with a scheme to imprison The Beast for a thousand years.

Rapture-Palooza was an oddity when it came out. It avoided a theatrical release and went straight to dvd. The initial premise seemed irresistibly attractive – a spoof of The Rapture and associated phenomena. The Rapture is a concept in Christian End Times theology where supposedly all the faithful believers will be bodily taken up to Heaven before the end of the world and the Anti-Christ allowed dominion on Earth over the rest of mankind for a thousand years.

The idea of The Rapture gained some high-profile attention in 2011 with Harold Camping’s failed prediction that it would occur in May of that year. It should be pointed out that Christian theologians have been debating for hundreds of years of what will happen – there is an entire denomination, The Seventh Day Adventists, that split from the mainstream churches over interpretation.

Depictions of the End Times and associated matters have been popular on film – for an overview see Films About Biblical End Times Prophecies.S ee Left Behind (2000) for a far more po-faced and serious, Christian-made version of what is supposed to happen and The Rapture (1991) for a less rosy view.

I was also attracted to Rapture-Palooza because of the name of Chris Matheson on script. Chris Matheson made his screenwriting debut with the hit Bill and Ted’s Excellent Adventure (1989). He and frequent co-writing partner Ed Solomon went onto write Bill and Ted’s Bogus Journey (1991) and Mom and Dad Save the World (1992), films on the common theme of not terribly bright people in various science-fiction scenarios, as well as the Eddie Murphy vehicle Imagine That (2009). Without Solomon, Chris Matheson has also written A Goofy Movie (1995) and Stepsister from the Planet Weird (2000), as well as directed/written the little-seen likes of The Wise Ones (2001), Evil Alien Conquerors (2003) and Monkeys (2007). (Ed Solomon is also present here as a producer). The film is directed by New Zealander Paul Middleditch who had previously made a series of fairly obscure films Tin Box (1994), Terra Nova (1998), A Cold Summer (2003) and Separation City (2009). This was Middleditch’s debut in the US mainstream.

Rapture-Palooza might have amounted to a highly amusing idea on paper; alas, little of it takes place on screen. Very similar things were conducted far better around the same time with the much more high-profile This is The End (2013). Both films play the idea of the Christian End Times and Rapture for comedy and are largely premised around giving well-known comedy actors their head in a series of improv scenes. You could even argue that Rapture-Palooza has done more to read up on what the Biblical Apocalypse entails than This is The End did; that unfortunately is about the only grounds on which this film is in any way superior. I have no familiarity with Paul Middleditch’s other works but what you can say on the basis of Rapture-Palooza is that he seems to have a remarkable lack of aptitude for comedy.

The film starts okay, if uninspired. However, it takes a dive about half-an-hour in where the intended spoof of the Biblical Apocalypse seems to get forgotten and much of the show has been given over to Craig Robinson. Robinson appears to have been allowed his head to do what he wants whereupon he manages to turn every line into a sexual innuendo and crude come-on to Anna Kendrick. These extremely unfunny innuendos go on and on and on with no creativity to them other than Robinson’s clear relish in delivering them, while the film around him collapses into tedium.

Anna Kendrick, whose name only had any prominence due to a minor part in the Twilight films, is one black mark against the film from the point it opens on her whiny voiceover. Demonstrating that a legion of teenage fans does not amount to a serious acting career in the outside world, she shows a lack of any real acting talent here. Rob Corddry has shown himself as a fine comic elsewhere – see genre outings like Hot Tub Time Machine (2010), Warm Bodies (2013) – and tries to do his best with a role that seems stuck in one-note caricature mode.