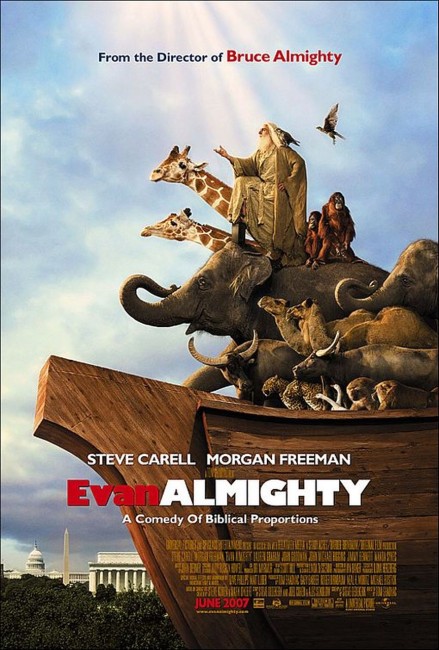 Television newsreader Evan Baxter has just been voted in as a congressman. He, his wife and their three sons move into a palatial new home in the Huntsville development. Soon after, Evan begins to receive visits from a man who claims to be God. God tells Evan that He wants him to build an ark. Animals then begin to follow Evan everywhere two by two; his hair and beard grow long and instantly return when Evan tries to shave or cut them; and his clothes vanish to be replaced by a set of robes. Evan tries to cope with the chaos this causes on Capitol Hill and with his family. He eventually accepts God’s wish that he start building an ark for a coming flood at midday on September 22nd, even though this makes him a laughing stock in the news media.

Evan Almighty is a sequel to Bruce Almighty (2003), a popular comedy featuring Jim Carrey as a newsreader that God (Morgan Freeman) grants miraculous powers to for one week. Expectedly, all the emphasis was on Jim Carrey going off his head.

Evan Almighty started out as a spec script by two novice screenwriters written in the aftermath of the runaway success of Mel Gibson’s The Passion of the Christ (2004), which they called The Passion of the Ark. This resulted in a bidding war. Sony Pictures picked up the script where it was developed by director Tom Shadyac who promptly dumped the existing script and had the basic idea rewritten by Steve Oedekerk to become a sequel to Bruce Almighty. Besides Tom Shadyac and screenwriter Steve Oedekerk, Morgan Freeman signed back on to play God, but Jim Carrey declined to reprise the role of Bruce.

The script was rewritten to feature Steve Carell who had played the part of a pompous fellow newsreader in Bruce Almighty. Of course, in the interim, Steve Carell’s star had ascended to the A-list with roles in hits like The 40 Year Old Virgin (2005) and as Ricky Gervais’s replacement in the American version of tv’s The Office (2005-13). The visual effects required for the ark scenes pumped the budget of Evan Almighty beyond the $100 million mark and eventually, with promotional costs added, caused it to peak at an estimated $210 million, making Evan Almighty the highest budgeted comedy ever made. This caused Sony execs to balk and eventually pull the plug on Evan Almighty, whereupon it was then picked up by Universal.

A good deal has changed between Bruce Almighty and the time that Evan Almighty arrived in theatres. The first and most foremost of these is that Mel Gibson’s The Passion of the Christ came out straight after Bruce Almighty and became the top-grossing film of 2004 and demonstrated to studio executives that there was a huge audience out in Middle America that were yearning for faith-based films. Thus we had a mini-genre of Christian films such as The Chronicles of Narnia: The Lion, The Witch and the Wardrobe (2005), The Exorcism of Emily Rose (2005), The Nativity Story (2006) and Bridge to Terabithia (2007), which came with merchandising schemes that had a dual level marketing strategy that pitched them to mainstream audiences on one level and another whole strategy that sold them to church audiences.

The irony about this is that Bruce Almighty was made at a time when the Christian box-office audience was not apparent and the film seemed to be bending over backwards to be vague and not too specific about theological details. With Evan Almighty, this is exactly the reverse and the filmmakers seem to be doing all they can to win the favour of a niche audience – there are some dreadfully twee and earnest scenes where Steve Carell and wife Lauren Graham say their prayers, while Morgan Freeman’s God is given squirm-inducing little positive thinking messages.

Alas, when Evan Almighty eventually arrived on cinema screens, the results were decidedly underwhelming. The reviews were universally derisive and audiences stayed away in droves, especially the expected Christian audiences that the film was pitched to who were clearly not terribly inspired about the idea of a comedy that made fun of Noah’s Ark. I do not wish to suggest that I in anyway stand on the same side as the evangelical Christian audiences that Evan Almighty was pitched to, but I have sympathy for their inability to get enthused about the film in any way. What Evan Almighty feels like is a bad stand-up comic whose stock in trade is based on racial caricatures or lame riffs on a particular theme – in this case, the film feels like a stand-up comic who is determined to make as many Noah and the Ark jokes as possible.

Of course, what Evan Almighty is is a typical script from Steve Oedekerk, who has written Ace Ventura: When Nature Calls (1995) and almost all of Tom Shadyac’s other films, as well as directed-written the agonisingly bad Kung Pow: Enter the Fist (2002) and the animated Barnyard (2006). Steve Oedekerk’s films reveal him as a gag writer who keeps throwing up everything including the kitchen sink in the hope of getting even a vague laugh irrespective of whether it makes any sense or not. Case in point here might be when the camera passes a billboard and we see that the film playing is called The 40 Year Old Virgin Mary, spoofing Steve Carell’s breakout hit. Why, we have no idea, the only reason it is there is that it is supposed to get a laugh.

In the Biblical story of Noah and the Ark, God directed Noah to make an Ark by to save he, his family and two of every animal species from the coming floods. While Steve Oedekerk replicates these basic details, it feels like aspects of the Noah’s Ark story have been transplanted into the present-day and removed of all context. According to The Book of Genesis, God wants to send the flood to destroy the Earth because the people are too sinful and only Noah and his family are considered worthy of saving. In Evan Almighty, God directs Evan to build an ark … not because he wants to destroy the Earth because its people are sinful, but to save one man on a housing estate over which a corrupt politician has built a dam that is about to collapse. Nobody is killed or judged; at most, the corrupt politician has an alpaca spit in his face. While the Biblical Noah’s story was one about divine wrath and passover, Evan Almighty merely has the incredibly banal feelgood message that sometimes deluded cranks might be right after all, while any notion of divine judgement has been replaced by God giving bland feelgood pep-talks that sometimes we should all do acts of random kindness.

Typically with a Steve Oedekerk script, not much in the film makes sense. In the Biblical story of the Ark, two of every animal was there so that the species would survive. No mention is made about the end of the world in the film, but Oedekerk for some reason still has Steve Carell’s modern-day Noah having to take on board two of every species of animal. The sole reason the animals seem to be there is because they are part of Noah and the Ark imagery. This, of course, provides the film with ample opportunity to play numerous gags with animals following Steve Carell about and an inordinate number of scenes with them pooping on people.

For the same reason, Steve Carell also gets outfitted with a set of Biblical robes that replace his street clothes at inopportune moments and – in a gag that was first played with Tim Allen in The Santa Clause (1994) – his hair and beard grow long and instantly grow back whenever cut. Again, there seems no reason why this should be happening to Steve Carell other than the film’s constant desire to play gags based on the imagery associated with Noah. The upshot of this is that beyond the gags, there seems no rationale to what is happening – it is something that makes God seem less like the Almighty than the host of some kind of divine Candid Camera show.

Director Tom Shadyac had previously directed the tv movie Frankenstein: The College Years (1991) and then debuted cinematically with the hit Jim Carrey screwball comedy Ace Ventura, Pet Detective (1994). Shadyac would then go onto the Eddie Murphy hit The Nutty Professor (1996), the Jim Carrey fantasy Liar Liar (1997), the non-genre Robin Williams vehicle Patch Adams (1998), the serious ghost story Dragonfly (2002) and Bruce Almighty. More recently, Shadyac suffered a near-life-threatening bicycle accident and afterwards emerged changed, whereupon he abandoned comedy. His most recent film is I Am (2010), a documentary that seeks to address what is needed to solve world problems.