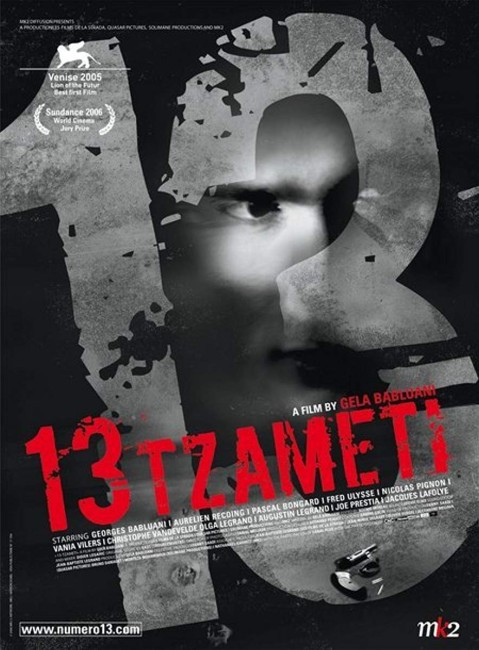 Sebastien is a builder working on the aging Jean-Francois Godon’s house roof. He is present when the old man takes an overdose of morphine in the bath. An important letter that Godon had falls into Sebastien’s possession. Sebastien has overheard conversations about Godon earning money. He follows the instructions in the letter, pretending to be Godon and hoping to get the money. He is met by men who take him to a remote part of the country. Without knowing much about what he is agreeing to, Sebastien finds himself in a game where a group of men must stand in a circle with guns to each other’s heads and gamble their lives in games of Russian Roulette as a crowd of bored wealthy speculate on who will survive.

13 Tzameti was the debut feature from Gela Babluani, a 26 year-old director from the former Soviet republic of Georgia who currently resides in France. Babluani makes 13 Tzameti with most of his family – casting his brother George in the lead role and with his father Temur Babluani, also a celebrated film director in Georgia under the Soviets, in a smaller part. The word ‘Tzameti’ means thirteen in the Georgian language.

13 Tzameti is a strong and incisive film. The premise reminds somewhat of the spate of human-hunting films we had a few years ago – the likes of Hard Target (1993) and Surviving the Game (1994) – which focused on the homeless and down-and-out being hunted for the amusement of a rich, bored elite. Although the film that 13 Tzameti reminds of the most is one that came out the same year – Eli Roth’s Hostel (2005), which likewise had people innocently straying into former Russian republics and being tortured and killed for fun by wealthy international customers. Subsequent films such as Severance (2006), Them (2006), I Spit on Your Grave 2 (2013) and Landmine Goes Click (2015) relocated standard Backwoods Brutality stories in Eastern Europe and the same sense of Russia as a corrupt, lawless frontier also turns up in the thriller Transsiberian (2008).

You are not entirely sure if 13 Tzameti is set in France or Georgia – it is a co-production between both countries. The French language spoken throughout would seem to indicate it is at least set somewhere within France but the locations have more the feel of Eastern Europe. Whatever the case, the sense throughout is of hero George Babluani slowly leaving behind a corner of civilisation and vanishing into a remote part of Europe where the borderlands of what is normal civilised behaviour no longer apply. Both 13 Tzameti and Hostel seem to hold this view, undoubtedly based on media stories about the rampant lawlessness and people smuggling rings across the impoverished former Eastern bloc countries, that sees these corners of the world as a place where human life is regarded as disposable for the perverse pleasure of paying customers.

Gela Babluani has made an effort to not let us know what is going on until the game begins. For around the first twenty minutes or so, 13 Tzameti gives the impression of being a kitchen sink drama of which Eastern Europe seemed to make them by the barrowful a few years ago, as we watch the cryptic happenings around the house, the arrival of the letter, George Babluani’s eavesdropping and the men who seem to be spying on what is going on. We are not entirely sure what is going on.

Surprisingly, Gela Babluani tells us almost nothing about any of the characters throughout the film – about the only personal detail we learn about the hero Sebastien is that he has a brother. This has the effect of reducing the various participants to being not much more than faces. One cannot help but suspect that if Gela Babluani had absorbed us a little more in the lives of some of the participants, the film would have had even more tension – we never end up engaging enough with Sebastien in terms of sympathy for the outcome of the game to be truly suspenseful. As it is however, the games of Russian Roulette generate a considerable degree of stark effectiveness.

Gela Babluani has shot 13 Tzameti in stark black-and-white, which gives the whole film an austere but immensely stylish cool. The landscape and rundown locations seem to brood with atmosphere. One is certainly interested to see what Gela Baluani is capable of turning out next.

Subsequently, Gela Babluani made The Legacy (2006) about a Georgian blood feud and the French crime film Money (2017), although these failed to enjoy the same high profile as 13 Tzameti.

13 Tzameti was brought up for an English-language remake 13 (2010) with Gela Babluani retained as director. This version was relocated to the US and starred Sam Riley as the youth drawn into the game and Jason Statham, Mickey Rourke and Ray Winstone as competitors, although fails to hold the psychological tension of the original.

(Nominee for Best Cinematography at this site’s Best of 2005 Awards).