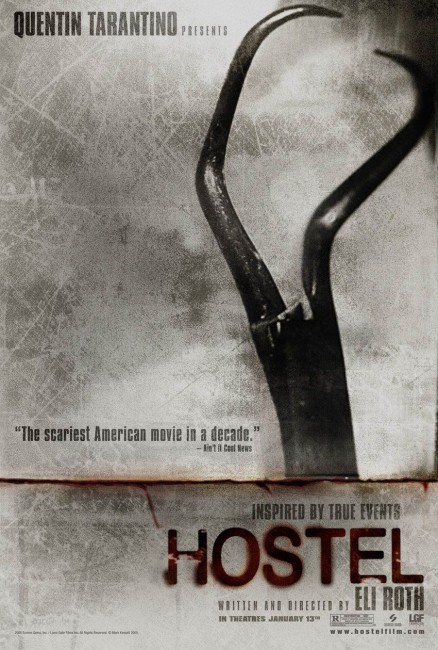 Two Americans, Paxton and Josh, and an Icelandic friend Oli, are backpacking in Amsterdam and looking to get laid. At the hostel where they are staying, they meet another traveller Alex who tells them that about a hostel outside Bratislava in Slovakia that is filled with beautiful, available girls. The three of them head to Bratislava and arrive at the hostel, which they do find to be filled with beautiful and available girls. After the first night, Oli goes mysteriously missing, leaving only a text message to say that he has left. The next night, Josh passes out drugged and comes around to find himself handcuffed up and then tortured. In trying to find where Oli and Josh went, Paxton is led to a disused factory. There he finds a group called Elite Hunting who have set up the hostel to lure travellers there and abduct them to be used as torture victims for a wealthy customers. Now made a prisoner, Paxton fights to escape before he becomes the next torture victim.

Director/writer Eli Roth emerged out of nowhere with Cabin Fever (2002), which found an audience among horror fans and was a modest sleeper hit. Cabin Fever was entertaining and rather funny, although not quite as landmark a horror film as it seemed think itself, and ultimately a film that seemed too caught up in the horror genre in-referentiality to be truly groundbreaking. Hostel was Eli Roth’s second film as director. Eli Roth is clearly emerging as a new name in horror, being nominated as behind numerous other announced horror projects including The Box (2009), a remake of The Bad Seed (1956), the adaptation of Stephen King’s Cell (2016), even a movie spinoff of Baywatch (1989-2001), as well as directing one of the spoof trailers for Quentin Tarantino’s Grindhouse (2007) and serving as producer on 2001 Maniacs (2005), The Last Exorcism (2010), The Last Exorcism Part II (2013), The Sacrament (2013), Clown (2014), The Stranger (2014), The Man with the Iron Fists 2 (2015) and Haunt (2019), plus the tv series Hemlock Grove (2013-5), wrote/produced Aftershock (2012), The Man with the Iron Fists (2012), the remake of Cabin Fever (2016) and the anthology tv series Urban Legends (2022- ) and appearing as an actor in Don’t Look Up (2009), Quentin Tarantino’s Inglourious Basterds (2009) and Piranha (2010). Beyond the Hostel sequel, it would be eight years before Roth would return to the director’s chair with The Green Inferno (2013), followed by Knock Knock (2015), the remake of Death Wish (2018) and the family film The House With a Clock in Its Walls (2018).

While Cabin Fever demonstrated that Eli Roth was a fan of 1980s horror, Hostel shows him putting his enthusiasm to more use than merely being an eager fanboy. In this sense, Hostel is a maturation upon Roth’s part. The earlier parts of the film follows, with some sarcastic amusement on Roth’s part, a trio of guys who could have been uplifted from a teen makeout film like Road Trip (2000) or EuroTrip (2004) in their quest to get laid. (Indeed, Eli Roth packs the film with so many undressed women with well-endowed chests that one wonders if he is not servicing some kind of fantasy of his own at times). Here Roth makes a number of sly backpacker in-jokes – the guys complaining about not being able to understand the Slovak-dubbed version of American movies without subtitles, jokes about trying to pick someone up in a nightclub while wearing a fanny pack. Soon however this Eurotrip fantasy segues into something altogether grim.

Hostel joins a host of films in recent years that seem determined to push the boundaries in terms of onscreen sadism, something that was nicknamed Torture Porn by journalist David Edelstein in 2006. Other among this fad include the likes of Anatomie (2000), House of 1000 Corpses (2003), Oldboy (2003), Saw (2004) and sequels, The Devil’s Rejects (2005) and Wolf Creek (2005). Although the progenitor of these is Japanese director Takashi Miiike who made squirm-inducing films like Audition (1999) and Ichi the Killer (2001), which still put most of these to shame. (In fact, Eli Roth includes a cameo from Takashi Miike in Hostel as a Japanese client who exits the torture chamber warning Jay Hernandez to be careful, he could lose all his money). Hostel is also executive produced (and was according to Roth uncreditedly co-conceived) by Quentin Tarantino, another director who attained a degree of notoriety for pushing a line of violence to extremes in his films.

Hostel is a film where Eli Roth goes for broke and determines to push boundaries. It is one of the most brutal films that one has ever seen in mainstream multiplex release. As the box-office cashier warned me before going in, “It’s not a film for someone with a weak constitution.” There are numerous scenes throughout with various fingers and toes being cut off. There is a very nasty scene where Jan Vlasak starts jabbing a power drill into Derek Richardson’s body and then lets him try to escape with the heels of his feet half sawn off. There is an unnerving sequence with a genuinely creepy and quite deranged German client (Petr Janis) torturing Jay Hernandez, jabbing scissors into his face, impaling him with a clawed hook and then chopping his fingers off with a chainsaw. The one scene that made nearly lose my lunch altogether was where Jay Hernandez must sever the stalk of Jennifer Lim’s gouged-out eyeball with a pair of scissors.

In contrast to the jocular humour of the early scenes, the mood throughout this half of the film is unrelentingly grim. Quite whether you could say such a bleak film as Hostel is entertaining is another question – a number of critics slammed the film as being repulsive and nasty – but as to whether Eli Roth delivers the goods and heads to a genuine extreme there is no question at all.

Hostel‘s weaknesses might be Eli Roth’s failure to fully engage with the characters as rounded individuals in the early scenes. These scenes have a humour that intermittently connects but there are times that Roth’s camera set-ups seem standoffish and distant. By contrast, the similar frat rat types in Cabin Fever were much more likeable and engaging characters, even in their crassness. The point that Hostel starts to engage is when people start getting tortured, which may say worrying things about where Eli Roth’s focus lies. These middle scenes are harrowing. The climax less effectively heads for classic movie hero cliché set-ups – the hero making the choice to go back for the girl, the kids turning up as last minute cavalry, the hero conveniently bumping into various conspirators in the scheme wherever he goes and being allowed to obtain just desserts revenge, and a car chase and suspense getaway at the railway station.

The film goes out on a sting with the hero resorting to ultra-violent revenge that is almost as nasty as that exacted by his tormentors. Eli Roth never goes as far as Wes Craven did in The Last House on the Left (1972), which showed with scathing irony a family seeking justice for the torture of those close to them by resorting to even more extreme violence. While Eli Roth goes a long way to make our stomachs churn at what is enacted on the innocent characters throughout, the ending seems to put such acts of extreme torture and the hero’s aggrieved trauma on the same footing. The torture of the victims, the hero’s justly angry response, even the tragic suicide of one of the victims, eventually seem like part of the same exhibition of atrocities that Eli Roth is putting on for us. What we end with is a film where you are not entirely sure if Eli Roth is making some point about how violent extremes breed a hunger for violent vengeance, or if he is just serving up ultra-violence and sadism for our delectation without any kind of a moral compass to it.

Eli Roth subsequently directed a disappointing sequel Hostel Part II (2007), which retold the same plot but with a trio of girls instead of guys. The dull Hostel Part III (2011) was a further sequel made without Eli Roth that relocated the operation to Las Vegas.