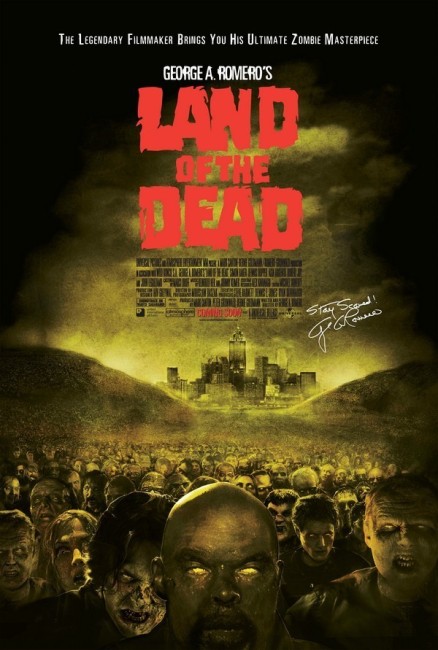 The zombies have overrun the Earth. One small pocket of humanity have walled themselves inside a city, taking refuge against the dead outside. There the entrepreneur Kaufman has created Fiddler’s Green, a high-rise where all the trappings of the world prior to the holocaust are recreated for those who can afford the steep price tag, while those without live in the anarchic streets below. Kaufman has employed various soldiers to guard the city. The head of these is Riley Denbo who has built the massively armoured truck Dead Reckoning in which he and his soldiers regularly venture forth into the ruins of the outside world to scavenge supplies. When Kaufman turns down the application of Riley’s second-in-command Cholo Demora for an apartment in Fiddler’s Green, Cholo responds by stealing Dead Reckoning and threatening to fire missiles on the high-rise unless Kaufman pays him five million dollars. Kaufman sends Riley to get back Dead Reckoning. However, once out there with his team of select few, Riley launches a plan to steal Dead Reckoning and head to freedom in Canada. What they have not counted on is the dead who have become increasingly more intelligent and now manage to break through into the city compound.

Land of the Dead was the long-awaited fourth film in George A. Romero’s Dead series. George Romero’s original trilogy – Night of the Living Dead (1968), Dawn of the Dead (1978) and Day of the Dead (1985) – are all genre classics. Night of the Living Dead was an apocalyptically bared nightmare that tore away all classic horror conventions and gave birth to the modern horror film. Dawn of the Dead was equally groundbreaking in that it gave birth to the 1980s splatter film and an entire industry of Italian imitators. Day of the Dead was less successful in its original run but is also the film where George Romero’s ideas, characterisation and writing are at the sharpest they were in the series. Day of the Dead was also a compromised vision on Romero’s part where budget constraints necessitated that he cut back on the much more ambitious idea that he had originally planned. Those ideas form the basis of Land of the Dead.

Outside of the Dead series, George Romero created a series of excellent films throughout the 1970s and 80s:– the suburban witchcraft film Jack’s Wife/Season of the Witch/Hungry Wives (1972); The Crazies (1973), another excellent apocalyptic nightmare about a madness-inducing biospill; the fiercely original and quite brilliant deconstructed vampire film Martin (1976); the non-fantastic Knightriders (1981) about modern motorcycle knights; and the Stephen King collaboration and EC Comics homage Creepshow (1982). Alas, after Day of the Dead, George Romero’s films seemed to decline. He went on to make the likes of Monkey Shines (1988), Two Evil Eyes (1990), The Dark Half (1993) and Bruiser (2000). Most of these are mediocre films and none were particularly successful. In these, one can see that George Romero’s fierce social apocalypses of the 1970s have become replaced by shrill caricatures – most of these films seem like revenge fantasies wherein Romero keeps setting up one-dimensional characters to deserve nasty fates.

Somewhere amidst this, interest gravitated back toward George Romero and he was granted the budget to go and shoot his fourth Dead film. It is sad that Romero had to wait for imitations of his own originals before he had the opportunity to complete his vision but it is good to see him regaining his stride. Romero would also subsequently go onto make Diary of the Dead (2007), this time inventively revisiting his zombies by way of a mockumentary, which he followed with a sequel Survival of the Dead (2009).

With Land of the Dead, George Romero again returns to his apocalyptic social metaphors. In Night of the Living Dead, we saw the survivors cowered in a farmhouse fighting off the dead outside their door and there was the overwhelming sense that the ordinary world had turned upside down, while the bleakly sardonic final scene echoed with the murders of Civil Rights workers in Mississippi and students at Kent State. When it came to Dawn of the Dead, the locale had moved to a shopping mall and the film was a satiric attack on consumerism – the zombies driven by material instinct, the survivors fighting for goods that no longer had meaning. By the time of Day of the Dead, we get the glimmer that some of the zombies’ original instincts are starting to show through, while humanity seemed buried in a vast bunker and had lost all purpose as the dead massed outside.

With Land of the Dead, George Romero has reinvigorated his metaphor. The dead are becoming increasingly more intelligent and united, while the image of humanity barricaded away in a city that it has built on top of the apocalypse is a savage escalation of the social divide of 1990s/00s America. Dennis Hopper seems representative of the ardently pro-Republican self-interest ethic, ruthlessly engineering society for the benefit of “the haves and the have mores”, while indifferently abandoning the poor and ordinary working stiffs in shantytowns below. Romero is naturally scathing about the world inside Dennis Hopper’s ivory tower and revisits Dawn of the Dead with a series of scenes with zombies bursting into the mall world, devouring shoppers, cappuccino drinkers and the likes. Here the shift has clearly gone from Dawn of the Dead, where the mall was a Utopian world being defended, to now a place where Romero is only scornful about the world inside and gleefully relishes the opportunity to tear it down.

The end resolution with the zombies having overrun Fiddler’s Green and Simon Baker and his select few departing in Dead Reckoning is the most hopeful ending of any of the Dead films. Simon Baker’s parting line, where he declines to shoot down the line of zombies, saying “No, they’re just trying to survive in the world” gets a laugh. It is almost certainly an unintentional laugh on George Romero’s part as surely the entire thrust of all four films up to that point is not one of two species trying to coexist in the world but each trying to eliminate the other for supremacy of the planet. The film ends with Simon Baker and friends heading off to Canada where “there’s nothing there.” (Romero himself sought Canadian citizenship not longer after the film came out). One suspects it is sneakingly what Romero wishes that he could do too. His sympathies in the film clearly lie with Simon Baker’s hero and his contempt for the Republican vision of the world that has come to dominate America. Romero’s overriding desire in the ensuing years seems to have become one where you sense he could abandon the rat race and go build a new idyllic world with a select few friends – and with Land of the Dead, Romero did exactly what Simon Baker does here, shooting the film in Ontario and subsequently re-establishing his production base in Toronto.

On the other hand, the social metaphor seems weaker in Land of the Dead than it was in the previous films. The writing seems a little rough around the edges as though the script had been hurried into production without having been fully polished. Romero certainly has a good cast – reliable troopers like Dennis Hopper and John Leguizamo and, in particular, Simon Baker who delineates his character with a strong inner moral sense. However, the characterisations lack the searing sharpness that they did in Night of the Living Dead and Day of the Dead. Land of the Dead is particularly weak when it comes to two of the staples of the other films. The fierce sense of survivalism and battle to the death with the dead that runs through the previous films has been muted – there are times that Land of the Dead seems more like a by-the-numbers action movie. While the film has a certain driving energy during the action, there is never the fierce siege mentality there was to the other films. In fact, with the battle over Dead Reckoning, one is distinctly reminded more of the post-holocaust film Battletruck/Warlords of the 21st Century (1982) than a zombie movie.

The other thing that Land of the Dead crucially misses is Tom Savini. Oh, Tom Savini is present as a zombie (who would appear to be the same one as the biker that he played in Dawn of the Dead) but the one thing he does not do is provide the splatter effects. These are handled by the top-drawer Hollywood effects house KNB EFX Group Inc – but, while good, they seem distinctly lesser to Tom Savini’s work. Land of the Dead lacks any of the out-there effects of the previous two entries – no screwdriver and helicopter blade in the head scenes, no people being torn in two or zombies with their intestines falling out. The Tom Savini effects were the set-pieces of the two previous Dead films – here there are certainly various heads splattered, intestines devoured and so on, but none of them are set-pieces that became the talking pieces of the show as they did in the other films.

Land of the Dead eventually emerges as equal parts a welcome return for George Romero and a disappointment. You could maybe compare Romero’s return to his most famous works as akin to another George – George Lucas and the way he revisited his most famous works with Star Wars Episode I: The Phantom Menace (1999) and sequels. Land of the Dead is certainly not a disappointment on the scale that The Phantom Menace was but there is the certain feeling in both films of the creator having lost some of their touch with the original vision. Of all George Romero’s Dead films, Land of the Dead is certainly the weakest of the series. Nevertheless, Romero returned to form with his next two zombie films, Diary of the Dead and Survival of the Dead.