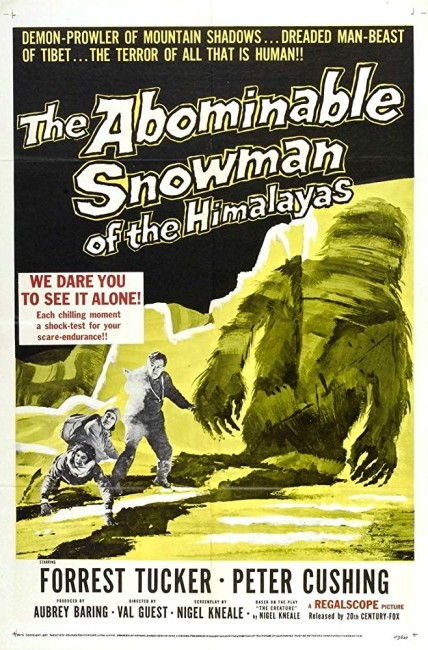 aka The Abominable Snowman of the Himalayas

On an expedition in the Himalayas, botanist John Rollason encounters the American Tom Friend at a monastery. He joins a sortie led by Friend to find the Yeti, which Friend intends to capture and bring back as a carnival exhibit. However, the expedition’s numbers are reduced by a combination of Friend’s recklessness, accidents and the Yeti itself. Eventually, only Friend and Rollason are left to confront the Yeti.

The Abominable Snowman was one of the early films from Hammer. It was made just before (but released after) Hammer had big success and made their name with The Curse of Frankenstein (1957), the same year. Hammer had had some earlier success with their film adaptations of Nigel Kneale’s Quatermass teleplays with The Quatermass Xperiment/The Creeping Unknown (1955) and Quatermass 2/The Enemy from Space (1957), both notedly under this film’s director Val Guest. With the successes of the Quatermass films in mind, Hammer and Val Guest here turned another of Nigel Kneale’s teleplays, The Creature (1955), a 90 minute one-act play that was originally broadcast live on the BBC.

The Abominable Snowman was made before Hammer had a big breakthrough and made their name with their florid Dracula and Frankenstein films, beginning with the aforementioned The Curse of Frankenstein and Dracula/The Horror of Dracula (1958). The Hammer films prior to Frankenstein and Dracula are very different to what the Hammer look subsequently became identified with – they are in black-and-white and dramatically often talky and dull. Here Val Guest’s direction is static. The Himalayan mountainside is represented by some highly unconvincing studio-backlot sets intercut with stock mountaineering footage. The later Hammer production flourish certainly would have made a much better film out of it.

Nigel Kneale’s body of writing demonstrates a continuing fascination with unsolved mysteries – Kneale always offered intriguing and unusual explanations for the likes of prehistoric dolmens, The Devil and UFOs. Nigel Kneale’s script here is tightly built and well characterised. Unfortunately, the ending disappoints. The entire film is built to an expected confrontation with the Yeti – but at the point of the meeting between humanity and the Yeti, the film enigmatically and unsatisfyingly fades out, giving only a brief glimpse of the Yeti. In another film, this is the point that things might have started to get interesting.

Nevertheless, the film builds to an ending that is interesting and certainly different to the xenophobic confrontations with the alien in American films of the period. Peter Cushing (who played the same role in the original tv version) gives another of his perfectly-elocuted aristocratic performances and Forrest Tucker has fun as the barnstorming American.

Val Guest’s other genre films include:- the comedy Mr Drake’s Duck (1951) about a duck that lays radioactive eggs; Hammer’s Nigel Kneale adaptations The Quatermass Xperiment/The Creeping Unknown (1955) and Quatermass 2/The Enemy from Space (1957); The Full Treatment (1960) about a racing driver suffering psychopathic impulses; Life is a Circus (1960), a comedy involving a genie; the end of the world film The Day the Earth Caught Fire (1961); some scenes of Casino Royale (1967); the science-fiction/pop music film Toomorrow (1970); and the Hammer prehistoric film When Dinosaurs Ruled the Earth (1970).

Nigel Kneale’s other teleplays were:– The Quatermass Experiment (1953); 1984 (1954) from the George Orwell novel; Quatermass II (1955); Quatermass and the Pit (1958-9); The Road (1963) about a haunting that may in fact be an example of time travel; The Year of the Sex Olympics (1970) about a future where the populace is pacified by televised sexual competitions; Wine of India (1970) about a future society that enforces euthanasia; The Stone Tape (1972) about the investigation of ghostly phenomena; the anthology tv series Beasts (1976); Quatermass/The Quatermass Conclusion (1979); the comedy series Kinvig (1981) about an SF fans who has an encounter with aliens; and the ghost story tv movie The Woman in Black (1989). Kneale’s film scripts were Quatermass 2/The Enemy from Space (1957); The First Men in the Moon (1964) from the H.G. Wells novel; Hammer’s The Witches/The Devil’s Own (1966); Quatermass and the Pit (1967); and uncredited work on Halloween III: Season of the Witch (1982).