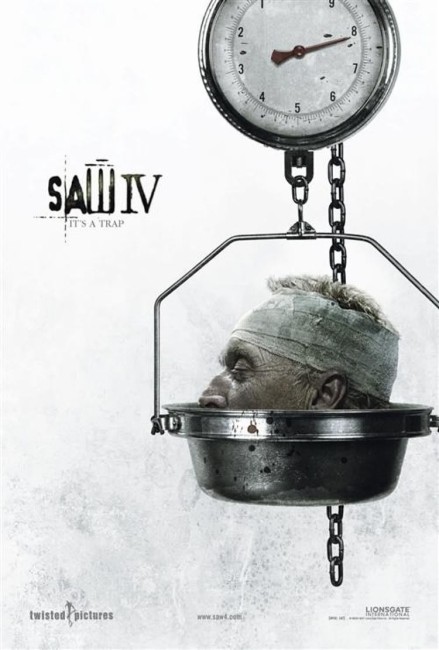 During the autopsy of John Kramer’s body, a tape recording is found left inside the stomach for Detective Hoffman. Hoffman is present as police find the body of Detective Kerry in one of Jigsaw’s traps. Officer Rigg ignores protocol and recklessly rushes in to her aid. At home that night, Rigg is drugged and comes around finds that someone, possibly a Jigsaw assistant, has presented him with a series of challenges. He is warned that he spent too much time trying to save other victims. He is now lead on a trail where he is to either rescue several victims or allow them to die. At the same time, FBI agents arrive, having had information that two detectives are being targeted. They make an aggressive attempt to interrogate Kramer’s ex-wife Jill Tuck who offers clues as to why Kramer became the Jigsaw Killer.

Saw (2004) is without question a modern classic. It was a gripping psychological thriller, full of torturous plot twists that pushed its audience into uncomfortably nasty places. The miracle was that even though it was made on a budget of only $1.2 million by novice writers/directors James Wan and Leigh Whannell, it succeeded in becoming a major success worldwide. It spawned six sequels – Saw II (2005), Saw III (2006), this and the subsequent Saw V (2008), Saw VI (2009), Saw 3D (2010), Jigsaw (2017) and Spiral: From the Book of Saw (2021). With the first three sequels, James Wan stepped back and allowed Darren Lynn Bousman to take the director’s seat. Leigh Whannell wrote the scripts for the preceding sequels but is absent in that capacity here.

I will readily admit to being no particular fan of Darren Lynn Bousman. Saw was a masterpiece of psychological suspense and torturously twisted plotting. However, all of the sequels have exponentially increased an emphasis on sadism and torture while decreasing the credibility of the plots and characters. These conflicting polarities are at their greatest extremes in Saw IV. This is perhaps exemplified by the opening scenes where Darren Lynn Bousman gives us a no-anatomical-detail-spared eye in on the autopsy of Tobin Bell’s body where we see his skull being sawed off and brain removed and then his ribcage peeled back and the stomach opened. Why? Probably for no other reason than that Bousman can show it and enjoys pushing things to absolutely gory extremes.

Subsequently, we get a number of other scenes where the only purpose is to show people being cut apart in as nasty a means as possible – a woman (Sarain Boylan) caught in a trap that gradually tears her entire scalp off; a husband and wife bound together with a series of metal rods impaled through both their bodies and she given the choice to tear hers out but at the cost of ripping through his major organs; someone caught in a device that will only release him if he pulls levers that impale spikes through his eyes; a character that can only free himself from a trap by pushing his face into a series of blades and so on.

The problem with Saw IV is that the series’ premise is now so strained that it becomes difficult to pull a fourth film off. For one, the central character and his female apprentice are both dead so this film is stuck with the difficulty of having to contrive a story about other apprentices and traps that Jigsaw appears to have set up prior to his death. The trail that Lyriq Bent is sent on seems highly contrived. Not to mention how Jigsaw’s original motivation of giving his victims choices that forces them to confront the sins in their lives has become exceedingly watered down – Lyriq Bent’s character is only sent on his quest because he has become too concerned for the victims of Jigsaw, for instance. The traps have become more about the novelty and sadism of each rather than the moral choices that each character has to make.

The plot has become exceedingly confused in trying to fit in all the back characters of the film – I became lost in trying to work out who was who from the other films in the various flashbacks. The surprises are exceptionally lacking this time around – the revelation of who Jigsaw’s new apprentice is is ho-hum and the film has to work hard in its labyrinth of flashbacks and connections to the other films to fit said character in. The one interesting thing that Saw IV attempts to do is to create a Jigsaw origin story. Although, even then the psychology is strained – Jigsaw sets up his fiendish traps all because a junkie caused his wife to miscarry – and ultimately only serves as an excuse to show Tobin Bell torturing more people.

(Nominee for Best Makeup Effects at this site’s Best of 2007 Awards).