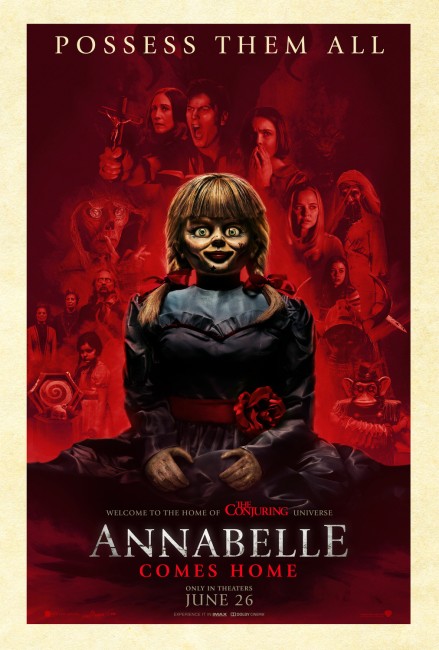 Ed and Lorraine Warren bring the Annabelle doll back and place it in the museum of cursed and occult artefacts that they keep in their locked basement. At school, their young daughter Judy is the subject of prejudice as a result of the Ed and Lorraine’s growing reputation as exorcists and ghost busters. Ed and Lorraine have to go away and leave Judy in the care of babysitter Mary Ellen. As Mary Ellen is preparing for Judy’s birthday party, her friend Daniela Rios invites herself over. While Mary Ellen and Judy are outside, a curious Daniela steals the keys to the basement and goes in to see what is there. She opens the blessed cabinet that contains Annabelle but inadvertently leaves it unlocked. Afterwards, the three of them are haunted by occult forces as the unleashed Annabelle brings to life the objects kept in the basement.

When James Wan made The Conjuring (2013), there was considerable fascination with Annabelle, the creepy doll that sits in Ed and Lorraine Warren’s museum that we see in the opening scene. The Conjuring was a considerable success and so Annabelle was promptly given her own spinoff film with Annabelle (2014). This was hated by almost everybody who saw it but did earn some $257 million worldwide. The audience response did not stop Wan and co from returning with an origin story Annabelle: Creation (2017), which was a considerably better film. Wan meanwhile had spun out what he calls The Conjuring Universe in an effort to turn the films into an interlinked universe, first with a sequel The Conjuring 2 (2016) and other spinoffs like The Nun (2018) and The Curse of La Llorona (2019).

James Wan is with few doubts of the finest directors currently at work in the horror and fantastic genres and has turned out sterling work whenever he is in the director’s seat – from the original Saw (2004) to Insidious (2010) and Insidious Chapter 2 (2013), The Conjuring films and DC Comics Aquaman (2018). A much more mixed bag is whenever Wan acts as a producer with the likes of the Saw and last two Insidious sequels, Demonic (2015) and Lights Out (2016). This has been particularly the case when it comes to the so-called Conjuring Universe with both The Nun and The Curse of La Llorona being the two worst films to come out bearing Wan’s name. The sole exception to this was Annabelle: Creation.

Wan has handed Annabelle Comes Home over to Gary Dauberman who had previously written Annabelle and Annabelle: Creation, plus serves as a producer on The Nun and The Curse of La Llorona. Elsewhere, Daubermn has written the scripts for Bloodmonkey (2007), In the Spider’s Web (2007), Crawlspace (2016), Wolves at the Door (2016), It (2017), The Cabin House (2019) and It: Chapter Two (2019), plus created the Wan produced tv series Swamp Thing (2019). Dauberman makes his directorial debut here

I have to say after having some initial scepticism based on the ‘produced by James Wan’ credit, I went with Annabelle Comes Home and enjoyed it for the most part. Both it and its predecessor are the sole standouts among the Wan produced films. The film is less an Annabelle film than it is The Conjuring 3. Patrick Wilson and Vera Farmiga’s Ed and Lorraine Wilson are back and have quite reasonable screen time. The film also features a number of other Warren cases about the Fairy Men, The Bride and the Black Shuck, which given the way the groundwork for upcoming films has been laid in other works in the series, we can presume is setting these up for future spinoffs.

That said, Wilson and Farmiga’s scenes are fairly much bookended at the start and end of the film while the bulk of the show centres around their daughter played by the up and rising McKenna Grace who previously impressed me as the psychopathic daughter in The Bad Seed (2018) and has appeared in a number of other high-profile works such as The Haunting of Hill House (2018), Ready Player One (2018) and Captain Marvel (2019).

Despite this being his first film, Gary Dauberman directs with a reasonable assurance. The film is particularly good during the build-up. There is a great scene where Katie Sarife goes down into the cellar for the first time and wanders around amongst the artefacts, which sit without movement, and then asks if anyone is there for them to give her a sign. The kicker of the scene is that … nothing happens. Dauberman’s success is in building the scene up with such a sense of anticipation that the lack of anything makes the suspense even more pregnant. At long last, Annabelle falls against the glass of the cabinet but this too is understatement when we expect it to do far more than that.

There is another fine scene where McKenna Grace opens the door of a bedroom and sees Annabelle sitting in a chair, shuts the door and then opens it again to find the doll isn’t there before she enters the room and Dauberman creates dread suspense about whether the doll will pop out and then the very uncanny image of seeing the figure of the ghostly bride move around beyond the window and doors. The latter sections of the show become more standard jumpshocks as the supernatural assault begins but the build-up is uncommonly effective.