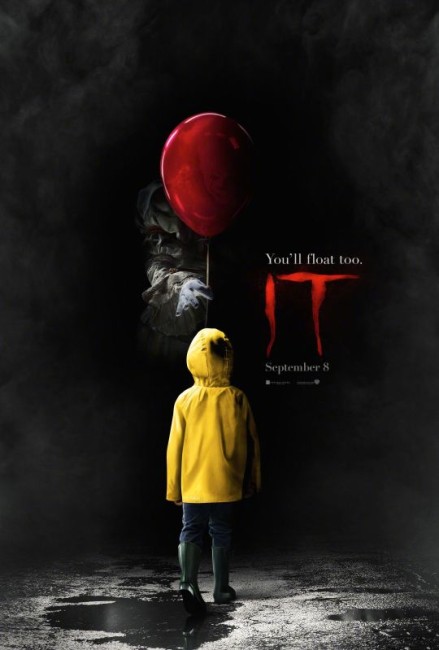 aka It: Chapter One

The town of Derry, Maine, 1988. While playing in the streets, young Georgie Denbrough is dragged down into the sewers by the sinister clown Pennywise. In the subsequent year, Georgie’s older Bill is haunted by this, believing it is possible to find Georgie. Bill and several other friends who form The Losers Club are on the run from bully Henry Bowers when they stumble into the sewers and encounter Pennywise. Pennywise continues to haunt them, appearing in the form of their fears and creating reality-warping illusions that adults cannot see. Digging into the town’s history leads Ben to believe that Pennywise is an ancient force of evil that returns every twenty-seven years to claim victims. After Beverly, the girl of the group, is abducted, they set out to find a means of combatting Pennywise.

It (1986) is the second longest of Stephen King’s novels, a Coming of Age horror story that alternates between a group of children in the 1950s and their adult selves returned to fight an ancient menace in the present. The book was brought to the screen once before as the mini-series It (1990), which has a mixed reputation. The one thing that everyone remembers about the mini-series though is Tim Curry’s Pennywise. It is this, almost singlehandedly, which has created the image of the killer clown, which has become a popular fixture in horror films and Halloween shows in the years since then (to the extent that the release of the new It was protested by professional clowns irritated at the negative image it was giving them).

The idea of a cinematic remake of It has been floating around since Warner Brothers acquired the rights to the book in 2009. The one most associated with the property was Cory Fukunaga, best known for the first season of tv’s True Detective (2014– ), which has gained a cult following. Fukunaga wanted to mount It was a two-part film – the first part taking place in the 1980s, the second in the present – and received Stephen King’s blessing. However, he departed over differences with the studio and their wanting to make a single film and insert more horror scenes whereas he wanted to make a character-driven piece.

Cory Fukunaga was succeeded by Andres (or Andy) Muschietti, a Spanish director who appeared with the short film Mama (2008), which inspired Guillermo Del Toro sufficiently to bring Muschietti to the US to direct a big screen version of the short film with Mama (2013). I was not much of a fan of Mama but many audiences regard it as a scary film and it has even been given the label of modern classic.

Muschietti and New Line Cinema chose to make only one It film that focuses on the children and their encounter with Pennywise, while omitting the other half of the book where the adult versions of the kids return to Derry to confront Pennywise again. However, by the time of the end credits, we see that the title is now listed as It: Chapter One. Following the film’s huge box-office success, New Line and Andy Muschietti returned to tell the second half of the story in It: Chapter Two (2019).

For all the disparaging of the 1990 mini-series, I would venture as far as to say that I think it works far better than the film version. The film seems very reliant on it and even replicates the opening of the mini-series where Georgie is snatched down into a culvert by Pennywise almost shot for shot. The film also eliminates many of the same aspect that the mini-series did – Pennywise’s manifestation as Famous Monsters from 1950s movies and the infamous orgy scene between Beverly and the other kids. The film does reintroduce elements of the book that were not covered in the mini-series – the sexual molestation by Beverly’s father is made more overt – but not that many.

That said, the film also changes the characterisation of some of the kids – it is Ben rather than Mike who develops the fascination with the history of Derry, while Stan’s Jewish background becomes a prominent element, Mike is given a background working in a slaughterhouse, and Henry Bowers gets a cop as father, while the sequel writes Richie in as being gay. The setting has also been updated from 1958 to 1988-9, two years after the book was written.

One of the strongest elements of the film is the relationship between the kids. All are well cast and the film spends time giving each of them detailed characters. The best performer of the group ends up being Sophia Lillis and naturally the film focuses on the triangle between the various guys who have a thing for her. On the other hand, we have had Stranger Things (2016– ), which came out fourteen months before It premiered – It even casts one of the Stranger Things kids in Finn Wolfhard who plays Richie. Stranger Things essentially took the idea of the Coming of Age monster movie that King fairly much patented and cast it through a patina of 1980s nostalgia. Unfortunately, in coming out after such a big hit, It emerges as a lesser copy by dint of its timing. Not to mention that Stranger Things simply does the whole Coming of Age/80s nostalgia horror story with much more effortless ease.

The other problem with the film is Andy Muschietti. I was a dissenting voice when it came to Mama because it felt that Muschietti’s effects were processed jumpshocks made without any real style and easily forgettable. It is more of the same. The aspect where the mini-series has it far better than the film is in the eerie balance of reality and illusion created by the creature. Muscietti delves into this a few times – most effectively one scene where the bathroom of Beverly’s home is splattered in blood but her father can see nothing – but most of the time fails to create the memorable sense of reality disjunction that Tommy Lee Wallace did.

Most of the sequences here are a parade of jump out and jab the audience in the rib moments created without much sophistication – and moreover have been retooled so that Pennywise is constantly lunging out at the kids in 3D. The most ridiculous of these is one where a giant-sized Pennywise emerges out of a projector screen and chases the kids around the garage. This was about the point I gave up on It.