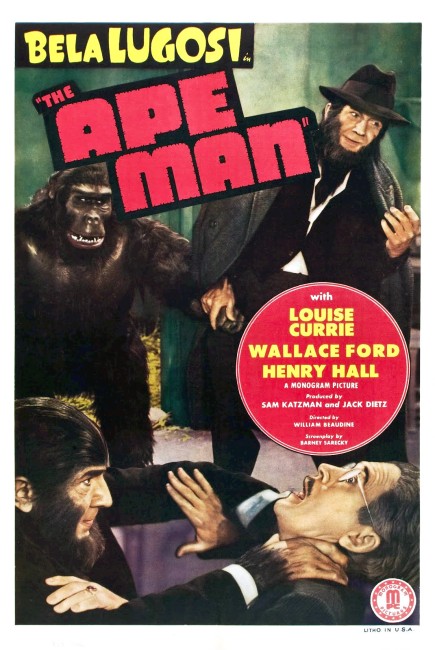 Medium Agatha Brewster is called back home after her brother James goes missing. Instead, she finds James hiding in his laboratory. A scientist, he has been transformed into an ape-man after one of his experiments went wrong. The only way for him to regain his human form is an injection of human spinal fluids. However, the only way to obtain these is to kill people. And so James now goes out, along with his pet gorilla, hunting for victims.

The Ape Man is one of the numerous Z-budget mad scientist cheapies that Bela Lugosi made a career out of during the 1940s. It was produced by Sam Katzman, who made a number of other similar Z-budget films, and was directed by the legendary William Beaudine, who made a host of other poverty row horror cheapies that ranged from Bela Lugosi Meets a Brooklyn Gorilla (1952) to Billy the Kid Versus Dracula (1966) and Jesse James Meets Frankenstein’s Daughter (1966), as well as almost all of the ultra-cheap Bowery Boys comedies. (See below for a list of William Beaudine’s other genre entries).

In all respects, this is a badly made film. It is poorly lit and photographed. Many of the shots are static where the camera sits in one position and Beaudine never cuts the scene up – clear evidence of a very hurried shooting schedule (for which Beaudine was notorious – he would reportedly only do one take of each shot, such that he earned the nickname ‘One-Shot’ Beaudine). Despite only a 64-minute running time, the film manages to be dull with not very much happening. Even Bela Lugosi, the mainstay of numerous poverty row mad scientists cheapies during the 1940s, is relatively restrained.

A clear influence on the film was the Boris Karloff mad scientist effort The Ape (1940), which had Karloff dressing as an ape to go and kill people for their spinal fluids. The Ape Man uses virtually the same plot but takes it down to a more luridly melodramatic level. Indeed, the similarity of plots and spinal fluid gathering themes has had The Ape Man frequently mistaken as being a sequel to The Ape.

There is the undeniable kitsch appeal to the images of seeing Bela Lugosi walking around the streets stalking victims accompanied by an actor in a very cheap-looking gorilla suit. The actual ape-man makeup is no more horrific than the image of a slightly hunched-over man with an Amish or Quaker chin curtain.

The sparring comic relationship between the reporter (Wallace Ford) and girl photographer (Louis Currie), a typical light relief feature of films of the 1930s, gives the film a small amount of life. At the end, a character who has been seen throughout is stopped and asked “Who’re you anyway?” whereupon he replies “Me? I’m the author of the story. Screwy idea wasn’t it?” and gives a dumb goofy look. It is this final coda that shows that the film fails to even taken itself seriously and acts as a slap in its audiences face for having done so.

The Return of the Ape Man (1944) was sold as a sequel by Sam Katzman and, although the film is another Z-budget mad scientist cheapie, it holds no continuity to anything here. Bela Lugosi returns, playing a scientist who transplants the brain of colleague John Carradine into the body of a revived prehistoric ape.