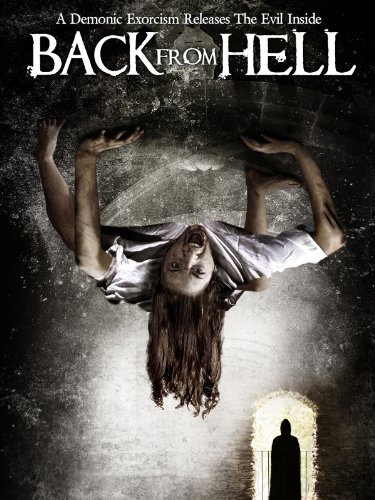 A group of six friends go on a vacation at a remote Italian monastery that was built in the 16th Century. They film everything with a video camera. On their first night there, they decide to conduct a seance. The pregnant Sarah is disturbed when the spirit they contact spells out in Latin that it wants her child. Spooky occurrences begin to occur and both George and Andrew begin to exhibit strange behaviour. The priest that tends the monastery is certain that George has become possessed by a demonic presence.

It becomes apparent soon into Back from Hell that we have another entry in the Found Footage fad, something that has enjoyed great success in genre material after the massive hit of Paranormal Activity (2007). Moreover, what we have is yet another Found Footage film that concerns itself with demonic possession and exorcism. In the vein of the possession genre over the last few years we have had [Rec] (2007) and sequels, Chronicles of an Exorcism (2008), The Last Exorcism (2010), Anneliese: The Exorcist Tapes (2011) and The Devil Inside (2012) all taking the Found Footage approach.

One wonders as Back from Hell starts what it is that the filmmakers have up their sleeve they thought they could add to the subject. More importantly, following The Last Exorcism and its extraordinary overturning of the cliches of the possession genre, a film that goes the traditional route of Catholic priests, Latin rites and so on, as laid down by The Exorcist (1973) and having changed little in the three decades in between, feels like a backwards step.

Back from Hell, originally shot under the title Ex Infernis (a Latin phrase that translates as ‘from below’), comes from a group of Italian newcomers. Peculiarly, it has been shot in English, which makes the dialogue come across as oddly stilted when intonated by its no-name Italian cast. The film has an authentic-seeming setting of a provincial Italian monastery and Leonardo Araneo is certainly able to use this to produce some modestly passable atmosphere. There is even a mildly spooky seance scene. All of this certainly seems to hold more to it in terms of atmosphere than the similar, more high-profile The Devil Inside did. That said, Back from Hell is still a stock possession and exorcism film and never moves too far beyond the cliches of the genre.

Towards the middle of the film, we get the introduction of some unusual ideas – the priest who has been seemingly sent to guard the monastery for something from within for never specified reasons; talk of the angel Metatron and the discovery of the box in the crypt that contains arcane knowledge; the demon wanting the pregnant girl’s baby. These are ideas that seem about to send Back from Hell in interestingly different directions – but the great disappointment is that they never do. They are just unfinished pieces of plotting that are raised but left in mid-construction leading nowhere. Even the end of the film with its talk of the arrival of an apocalypse and a quarantine zone established around the village puzzles as it is a left field element that comes out of the blue and only leaves you confused about what is happening.