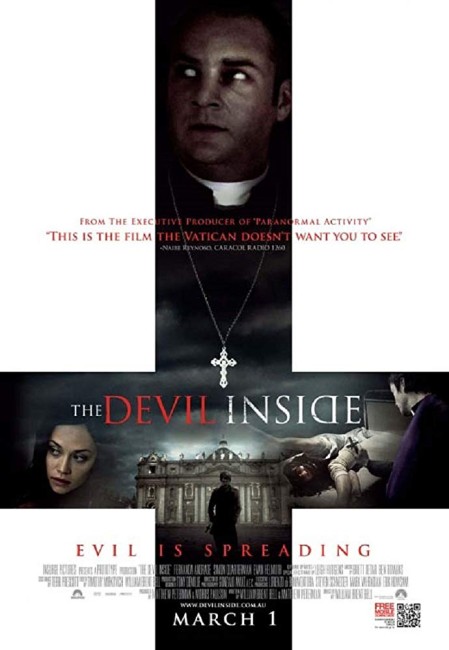 American Isabella Rossi travels to Rome accompanied by a camera crew. She is determined to find what happened to her mother Maria who has been placed in a Vatican hospital several years ago following her participation in an exorcism that went wrong. The doctors insist that Maria is only suffering from mental illness with a phobia to religious items. Isabella contacts Fathers Ben Rawlings and David Keane, two young breakaway priests who believe in the actuality of demonic possession and claim that many instances are being dismissed by the church as mental illness. She gets them to try and exorcise Maria but this goes wrong and one of the priests becomes possessed. As they try to deal with this, they realise that they have encountered a demon that can pass between host bodies.

The demonic possession and exorcism genre peaked after the massive success of The Exorcist (1973), which produced a horde of copies. The genre made a more than reasonable return in the 00s with films such as Exorcist: The Beginning (2004), The Exorcism of Emily Rose (2005), Blackwater Valley Exorcism (2006), Exorcism: The Possession of Gal Bowers (2006), Requiem (2006), Chronicles of an Exorcism (2008), The Unborn (2009), The Last Exorcism (2010), Anneliese: The Exorcist Tapes (2011), Back from Hell (2011), The Rite (2011), The Conjuring (2013), Deliver Us From Evil (2014), The Atticus Institute (2015), Backmask/The Asylum/Exeter (2015), The Vatican Tapes (2015), Incarnate (2016) and The Crucifixion (2017). The Last Exorcism, one of the few entries in this genre to do something ingenious by subverting the cliches and expectations, Anneliese, The Atticus Institute, Back from Hell and Chronicles of an Exorcism charted new ground in giving us the possession and exorcism film in terms of the Found Footage genre, as The Devil Inside also does – although the possession film had been there earlier in different ways with the Spanish film [Rec] (2007).

The Devil Inside comes from William Brent Bell whose previous outing into genre material was Stay Alive (2006), a horror film founded on the absurd notion of Countess Elizabeth Bathory being incarnated inside a videogame. The Devil Inside at least rises to a level of mediocrity. It received some extremely bad advance word – most of which is typical IMDB message board hyperbole, which is to automatically label everything “the worst film I have ever seen” – but for all that is neither a film that is particularly excruciating, nor one that in any way stands out from the humdrum.

Essentially, if you have seen a handful of possession/exorcism films – or Found Footage films for that matter – you can fairly much predict where The Devil Inside is going at all points. Indeed, the film reminds very much of The Rite from several months earlier – an American goes to Rome and delves into the fringe world of exorcism, finding a rogue priest(s) operating outside of Church doctrine, resulting in an exorcism attempt where the priest becomes possessed. That maybe and a few dashes of the central gimmick from Fallen (1998) of a demon that hops between bodies.

William Brent Bell does the Found Footage form competently. Unfortunately, he rarely does anything more than that. The film readily trades in the cliches of the genre. I thought the one thing that the Found Footage approach might offer is a digging beneath the cliches in search of some greater truth about what is happening – something that both The Last Exorcism and The Rite did. However, William Brent Bell only unimaginatively toes the Catholic party line.

It is this cliched treatment and lack of anything more substantial that fails to make The Devil Inside‘s case as an exorcism film – a film like this should be about rooting everything in a deeper reality, not repeating the cliches of a bad horror film. There are some mildly effective moments with a possessed Evan Helmuth trying to drown a baby he is baptising, along with all the usual bodies twisting into contorted positions, people popping up behind others and so on. The film becomes increasingly hokier with the multiple demonic transferences and reaches a particularly unsatisfying conclusion that smacks of not knowing how to end the film.