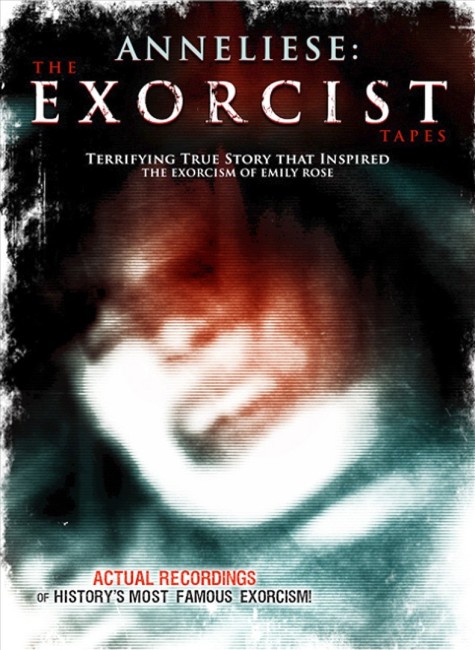 Bavaria, West Germany, 1976. A film crew accompanies a German and an American psychiatrist, filming them as they visit the home of the Michel family to check on the mental health of the teenage daughter Anneliese. As they enter the house, Anneliese urinates on the floor and then drinks it. She has been diagnosed with temporal lobe epilepsy but the Michel family have called in Catholic priests. The priests are certain that she is possessed and are about to conduct an exorcism. The psychiatrists are unable to explain the things they witness such as Anneliese’s bed physically levitating. The priests begin their exorcism but the demon inside Anneliese begins to psychologically toy with, assault and even kill the members of the group.

Anneliese: The Exorcist Tapes is one of a spate of possession and exorcism films that we have had in the last few years that have conducted themselves via the Found Footage treatment. Others among these include the amazing The Last Exorcism (2010) and the more routine likes of Chronicles of an Exorcism (2008), Back from Hell (2011) and The Devil Inside (2012). While all of these make claims to be true stories, Anneliese: The Exorcist Tapes goes even further and claims to be a Found Footage account of Anneliese Michel, the sixteen year-old who was killed in Wurzburg, Germany in 1976 after being subjected to an exorcism. The Anneliese Michel story gained prominence after being substantially fictionalised in the high-profile The Exorcism of Emily Rose (2005) and a more balanced German-made account Requiem (2006). Of course, in reality, there were no cameras filming during the exorcism and the film we have is a total fiction when it comes to adherence to most of the facts.

This version was made by The Asylum, the company responsible for numerous mockbusters that are based around copying the titles of other big-budget releases, which have included the likes of The Da Vinci Treasure (2006), Snakes on a Train (2006), I Am Omega (2007), Transmorphers (2007), Battle of Los Angeles (2011), Age of the Hobbits (2012) and Atlantic Rim (2013), among others. Director Jude Gerard Prest had previously acted as a producer on various documentary and reality tv series before making his directorial debut with the documentary Rabbit Hash: Center of the Universe (2004) about a town that elects a dog its mayor. Prest subsequently made the tv series The Ghost Speaks (2013) interviewing people who had experienced real-life hauntings.

The idea of conducting a Found Footage telling of the Anneliese Michel story is a clever one, although something that immediately falls down when subject to a typical Asylum corner-cutting budget. One of the biggest credibility gaps is that though the film is set in Germany, most of the cast choose to speak English throughout – the characters of an American psychologist and filmmaker are introduced meaning that everything has to be said in English so they can understand it. In the few scenes where we do get people speaking German, they are either translated on camera by others or else are quickly advocated to speak English. Even the demon possessing Anneliese is good enough to follow orders and speak English for the camera.

Despite telling a supposedly true story, the possession only follows the cliches established by The Exorcist (1973) – a parade of obscenities, urination, sexual licentiousness, talking in foreign languages, a rocking/levitating bed, spider walks, even the same deep voice. The film also seems to consider the facts of the historical account to be something it has to embellish and adds three murders to the mix, something that never happened in actuality.

Certainly, Anneliese: The Exorcist Tapes does remain true to the facts of the case more so than Emily Rose did – retaining the 1970s German setting, for one, and details like the way the priests forced Anneliese to perform endless genuflections. It does however buy into the entirely fictional debate that Emily Rose created – that the possession was real and that the psychiatrists who diagnosed Anneliese Michel with temporary lobe disorder failed to understand the real cause. The film even goes to the extent of characterising the psychiatrists as comically self-important figures who are constantly offering up patently absurd explanations for what they are seeing. A balanced look at the facts of the Anneliese Michel court case shows that exactly the opposite was true – that it was priests who immediately jumped to the conclusion that it was an instance of possession and rejected psychiatric explanations in favour of superstitious ones to the eventual point of criminal negligence.