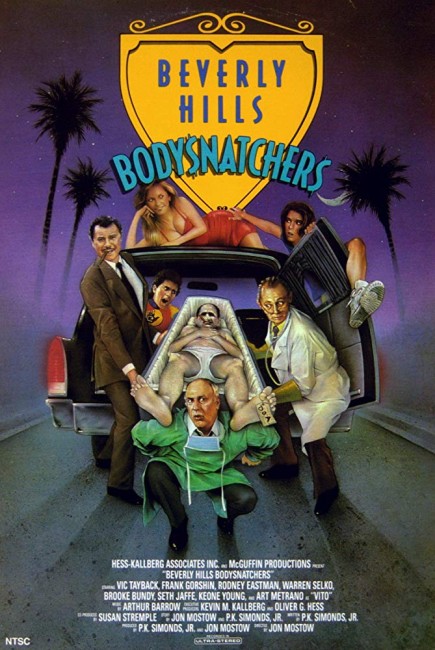 The Mafia hood Vito puts the squeeze on Lou and his associate The Doctor who run the Greener Pastures Funeral Home in Beverly Hills. They are told to pay back the money they have borrowed, which they claim they needed for alterations. Meanwhile, Vito’s two layabout nephews Vincent and Freddie are failing badly in their attempts to market the Surfomatic 2000, a mechanical surfboard that allows people to surf indoors. Vito assigns Vincent and Freddie to work as assistants at Greener Pastures and report back on what is going on. Grossed out at having to handle dead bodies, Vincent and Freddie determine to get themselves fired. They then discover that The Doctor is conducting experiments in the back room to perfect a formula that will resurrect the dead. Lou and The Doctor have a scheme to make money by resurrecting the rich, although so far the dead they have resurrected are lacking in mental faculties. Lou and The Doctor agree to cut Vincent and Freddie in if they will help procure fresh bodies. The local Mafia head Don Carlo is then killed after being hit by a stray ball on the golf course. Vito brings him to Greener Pastures for the funeral but by mistake The Doctor injects him with the formula, bringing the Don back to life as a zombie.

Beverly Hills Body$natchers is an inane 1980s comedy. It was one of the several teen black comedies that all came out around the same time set around mortuaries or involving dead bodies. The year before had seen Mortuary Academy (1988), which has many similarities to Beverly Hills Body$natchers in its story of two teenagers inheriting a mortuary. Four months earlier there had also been the hit of Weekend at Bernie’s (1989) about two teens who pretend that their dead boss is still alive.

Beverly Hills Body$natchers never ventures into the same bad taste territory as Mortuary Academy, nor the black farce of Weekend at Bernie’s – the tone of humour is more in the vein of the 1980s series of Police Academy films. If anything, it could be considered more of a variant on the Ron Howard comedy Night Shift (1982) about hijinks in a funeral parlour – that perhaps combined with a PG-rated version of Re-Animator (1985).

Jon Mostow directs with a crude hand. The film’s tone is loud and unsubtle black humour that frequently verges on cartoonish farce. Everything is pitched down to a level of lowbrow slapstick. Almost all of the humour consists of people running about with raised voices. The majority of the gags are crude and witless – not quite the tastelessness of Mortuary Academy or that Troma were trademarking around the same time – just broad and wholly unsubtle. The scenes with the Chinese mobsters delve into a questionable racial humour – all disgust at what people are eating and at the killing of chickens. None of it is particularly sophisticated or even funny.

None of the cast have gone onto anything of substantial note – you can usually find all manner of before-they-were-famous names on the credits of these 80s B movies. The one name of interest however is that of director Jon Mostow. Apart from a segment of the anthology Fright Show (1985), Beverly Hills Body$natchers was Mostow’s first film. Subsequently going by his full name Jonathan, Mostow went onto direct high-profile films such as Breakdown (1997), U-571 (2000), Terminator 3: Rise of the Machines (2003) and Surrogates (2009), as well as came up with the story for House at the End of the Street (2012).