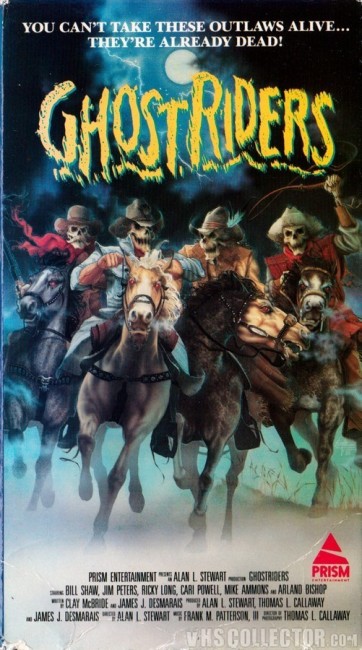 The town of Santa Rio, Texas, 1886. A lynch mob led by Reverend Thadeous Sutton drag the outlaw Frank Clements out of the jail cell where he awaits trail and hang him. In Santa Rio of 1986, the Reverend’s descendent Jim Sutton is a history professor who has made a study of the era. Jim’s son Hampton travels out to his father’s ranch with his co-workers Cory and Tommy, along with Cory’s wannabe girlfriend Pam who prefers the older Hampton. Upon arriving, they find that the professor has gone missing. As they search the property for him, they are attacked by the ghosts of Frank Clements and his gang.

Ghostriders is drearily made on all counts. Alan Stewart’s direction is flat and cheap looking. Three-quarters of the film consists of people running around shooting down the phantom gunmen – there is nothing to the film other than that. Even then, the slowness of the pace seems to make the film’s 85 minutes drag out forever. There is never any explanation offered for the outlaws’ resurrection.

There is also a conceptual confusion in terms of exactly what the undead outlaws are. The title leaves the implication that they are ghosts but there is nothing ghost-like about their actions – they are regularly downed by standard bullets and, other than their off-screen resurrection, could be standard corporeal gunmen. The problem would seem to be one born of the film’s low budget – that it is easier to show people pretending to be shot down by bullets than having to provide any ghostly optical effects. In the end, the hero abruptly disposes of the ghostly gunslingers by producing a sawn-off shotgun once owned by the head outlaw, which for no particular reason has the power to magically despatch them.

The actors seem to be mostly amateurs – certainly, none of them ever went onto do anything again. Their interactions are played out and directed in cliches. Most of the principal actors play passably but down the end of the cast list there are some extremely bad performances – notably Gerald Stewart and the film’s producer James J. Desmarais as two redneck fishermen with hick accents that are played up to an excruciating caricature. The other lame performance is that of Roland Bishop as the Walkman-head who spends the entire film playing the part as a moron.