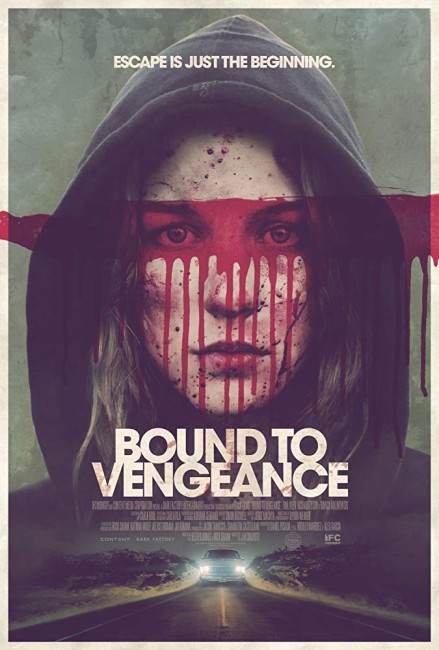 Eve has been held prisoner, chained up in a house. However, she is able to knock her captor Phil out with a brick and chain him up. Searching the house, she finds photos of other girls who are being likewise held prisoner. At gunpoint, she demands that Phil take her to the different locations that the other girls are being held so that she can free them. However, this does not go according to plan and Eve instead ends up being inadvertently responsible for the deaths of two of the girls. As she insists on continuing to the other locations to free the remaining girls, Phil warns her that she will not like the things she will find there.

From the wholly generic title, you expect nothing much from Bound to Vengeance, just another revenge/vigilante film. There have been a great many of these since the success of Death Wish (1974) and they are routinely churned out for the dvd/action market. A closer look at the premise of a girl seeking revenge from her captor for years of being chained up makes you think of a film like Day of the Woman/I Spit on Your Grave (1978) or Ms. 45/Angel of Vengeance (1980) about an abused woman on an ultra-violent revenge spree against the men responsible. (That said, the purposes the girls are being kept for are never specified – sexual in the case of the girls in the warehouse, although you get the impression in some of the things that Richard Tyson says that this was not the case with Tina Ivlev).

While Bound to Vengeance sets out along the lines of a revenge film, this quickly proves to not be the case. Soon into the film, Tina Ivlev’s crusade gets turned on its head – first as a crazed Stephanie Charles is freed and runs out of the house, only to fall and impale herself on a fence, and secondly as Dustin Quick is freed where Richard Tyson quickly suggests that Tina Ivlev is a replacement in order to get her to attack Tina so that he can make a getaway during which Tina is forced to shoot Dustin.

These scenes leave you taken aback because they mess with you sympathies. A girl on a crusade to free fellow captives is something we should be cheering on but instead we are watching all of this going badly wrong, which is not meant to happen.

The most fascinating aspects of the film come during its latter half where it is less a work about vengeance or even the rescue mission that it looks on paper and more a piece about the heroine’s journey of discovery of the truths about her life and reasons for being there. In this respect, what the film resembles is not so much Death Wish or I Spit on Your Grave but Oldboy (2003) and the way it built the protagonist’s quest for vengeance over his imprisonment out into an existential questioning of the very assumptions he has made about everything that has happened. The same thing occurs here and with no less than fascinating results in the gradual revelations she discovers.

Bound to Vengeance was the first English-language film for Mexican director J.M. (Jose Manuel) Cravioto who had only previously made documentary subjects in Spanish language.