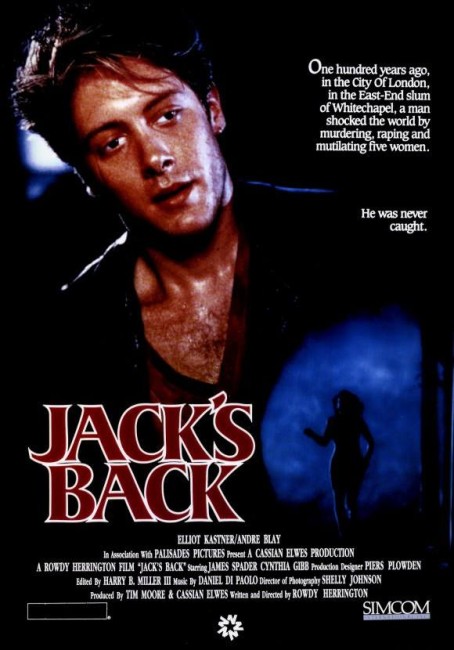 Los Angeles is being terrorised by a series of killings that mimic the Jack the Ripper killings on the exact same dates the original killings occurred a century before. Police are baffled. John Wesford is a medical student working at a neighbourhood clinic. He goes to the apartment of a pregnant prostitute patient only to find one of his co-workers Jack Pendler there, having just killed her, the latest of the Ripper copycat killings. John gives pursuit back to the clinic, only for Jack to grab him in a noose and hang him. John’s twin brother Rick wakes from a dream in which he saw everything that happened and heads to the scene. In the aftermath, John is blamed as the Ripper copycat by the police. After Rick comes forth to try and clear his brother, the police begin to suspect that he might be the one responsible for the killings. At the same time, Jack attempts to eliminate Rick as a witness. Rick is forced to become a fugitive on the run as he attempts to find proof that Jack was the killer.

Jack’s Back came with a great pitch. It was released in the year that was the centenary of the Jack the Ripper murders and came with an attention-grabbing plot that featured a killer replicating the Ripper killings in the present-day. The idea of a Ripper copycat or The Ripper being resurrected in the present was also featured in other films like The Ripper (1985), Bridge Across Time/Terror at London Bridge (1985), Ripper: Letter from Hell (2001), Bad Karma (2002), The Legend of Bloody Jack (2007), The Lodger (2009), Razors (2016) and the first season of the tv series Whitechapel (2009). There was even the Star Trek episode Wolf in the Fold (1966) where The Ripper turned out to be an alien entity that took possession of Mr Scott.

The film appears to have not had sufficient budget to go to London to shoot, which would have made the idea work far better, and locates everything in L.A,. For that matter, the film appears to not have had the ability to even hire somebody to research the details of the Jack the Ripper case, which should have been available at any library back in the pre-internet era of 1988. Not that this matters too much as any connection to the Jack the Ripper killings is despatched with after the opening scenes and thereafter the film focuses less on the police trying to find the copycat than it does on the twin brother of the person framed for the crimes who goes on the run after being wrongly accused too.

Jack’s Back comes with some great promise – a Jack the Ripper copycat, a twin having a dream that exonerates his brother and contains the identity of the guilty party – but the delivery of such ends up being utterly routine. For one, the writing is sloppy. Apparently there was even less money to hire someone to research proper police procedure than there was to go to research the details of the Jack the Ripper killings – it may have escaped the writer’s notice but the evidence that has John listed as the killer is entirely circumstantial. Certainly, a young and then largely unknown James Spader is great as the handsome and principled doctor and his slightly more dishevelled and less reputable brother. (Even then, the script fails to give much reason why John has to go to the prostitute’s apartment in the first place).

Jack’s Back was a directorial debut for Rowdy Herrington who next went on to make the Patrick Swayze hit Road House (1989). Herrington has made a half-dozen other films since then, none of much distinction. His one other film that falls into genre territory was Striking Distance (1993), a Bruce Willis-starring action film featuring a serial killer.

The other Jack the Ripper films include:- those that conduct supposedly straight tellings of the details of the case such as Jack the Ripper (1959), the Spanish Jack the Ripper of London (1971) with Paul Naschy, Jess Franco’s Jack the Ripper (1976) with Klaus Kinski, Jack the Ripper (tv mini-series, 1988) starring Michael Caine, The Ripper (1997), the Alan Moore graphic novel adaptation From Hell (2001) with Johnny Depp and the German Jack the Ripper (2016). There are a number of other works that feature The Ripper as a central character like Alfred Hitchcock’s The Lodger: A Story of the London Fog (1927), and its remakes The Lodger (1932), The Lodger (1944) and Man in the Attic (1953), as well as Room to Let (1950), although most of these vary widely from the known details. More prevalent have been speculative treatments, including the likes of:- having the contemporary but fictional figure of Sherlock Holmes solve the mystery in A Study in Terror (1965), Murder By Decree (1979) and Holmes & Watson: Madrid Days (2012); the Ripper being an alien spirit that possesses Scotty in Star Trek‘s Wolf in the Fold (1966) and with similar stories occurring in episodes of Kolchak: The Night Stalker (1974-5) and The Outer Limits (1995-2002); the Ripper being Dr Jekyll in both Dr Jekyll and Sister Hyde (1971) and Edge of Sanity (1989); Jack the Ripper’s daughter featuring in Hands of the Ripper (1971); H.G. Wells and the Ripper travelling through time to the present day in Time After Time (1979) and its tv series remake Time After Time (2017), as well as a time-travelling Ripper appearing in episodes of tv series like Fantasy Island (1977-84), Goodnight Sweetheart (1993-9) and Timecop (1997-8); The Ripper having travelled out West in the Knife in the Darkness (1968) episode of the Western tv series Cimarron Strip (1967-8) and the film From Hell to the Wild West (2017); a parody segment of Amazon Women on the Moon (1987) that speculates that the Ripper was in fact the Loch Ness Monster; the Babylon 5 episode Comes the Inquisitor (1995) that reveals the Ripper was taken up by aliens and redeemed; transposed to Gotham City in the animated Batman: Gotham By Gaslight (2018); even turning up as a character in the French animated film Jack and the Cuckoo-Clock Heart (2013). Also of interest is the tv series Ripper Street (2012-6), a detective series set in London in the immediate aftermath of the Ripper killings.