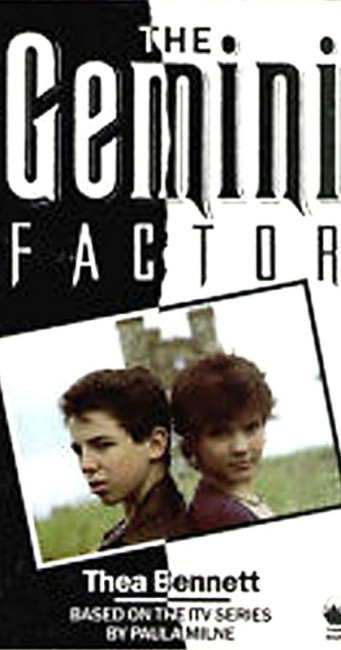 Leah is an orphan who has been adopted by Joy and David and is the perfectly behaved child. Unknown to her, she has a twin Lee who lives nearby and has been adopted by Ken and Verity. Unlike Leah, Lee is defiant and constantly getting into trouble. Leah and Lee both begin to see reflections of the other in mirrors. Leah is able to mentally reach out and halt Lee in some of his more rebellious acts, while he inspires her to stand up against conformity at school. The two even have the same psychiatrist Oliver without being aware of it. Leah’s friend Ruth steals the ring she has been left with since birth, one half of a yin-yang symbol. Lee has been left with the other half of the ring and becomes drawn to Ruth after he sees her wearing it. At the same time, both Lee and Leah see through the others’ eyes and sense danger about to occur at the old clocktower.

The Gemini Factor was a tv mini-series that aired in six half-hour episodes on UK’s Thames Television. There was very much a fad during the day for making fantastical series for children and young audiences – see the likes of Chocky (1984) and sequels, The Tripods (1984-5), The Gift (1990), Dark Season (1991) and Century Falls (1993), among others. Today we would call them Young Adult works.

The Gemini Factor is a work on the subject of Twins and twin psychic connections. Interestingly the big twist that the mini-series sets up – that the two central characters are twins – is made clear from fairly much the outset with lots of hints, clues and unsubtle mentions of twins and reflections, although it takes the entire show for the two characters to actually make the connection and come together.

I soon quite liked the series in the way it builds up the mysterious connections between the two kids with them seeing the other’s reflection in windows and mirrors; scenes where they both end up doing things in tandem such as playing keyboards despite being in different places. And most intriguingly having premonitions and visions through each other’s eyes of various locations and of potential danger. It is this slow build of mysterious connections where everything leads towards the unique location of the clocktower (in reality, the folly of Broadway Tower in Worcestershire) that makes the show unique.

Unlike a number of works on the twin theme, this does the good twin/bad twin thing with some subtlety – indeed, it is less good and bad than virtuous and rebellious twin. The two children give very good performances and carry the show between them. Louisa Haigh is perfectly polite and mannered, the epitome of the good girl. By contrast, Charlie Creed-Miles as her psychic mirror gives a performance of surly defiance, managing to deliver every line in a face-twisting sneer.

The most intriguing scenes are where one of the twins starts to influence the other – where Lee gives Leah the defiant boost that allows her to stand up and play a different song at the school recital (The Beatles’ Let It Be (1970), although it seems a hard stretch to believe that an entire choir could get it pitch perfect on the first try without any rehearsal), or where he is about to throw a stone through the window of his psychiatrist’s house but she freezes him in his tracks.

The drama comes together well. It is occasionally contrived – the plot that drives several episodes is a rather lamely strung out around Louisa Haigh’s best friend Vicky Murdock stealing her ring. Or a looming sense of danger that turns out to be nothing too special – a lightning bolt crashing in through a window, at most a kid hanging on a toppling flagpole on the clocktower.

In many ways, the entire mini-series reads like a superhero origin story. The show ends at what is surely the most interesting point – the question of what happens after the two twins meet. What would they be like with their psychic abilities united? How would they get on and influence one another and how would everyone else react to them? It is a shame that nobody ever made a sequel to the series.