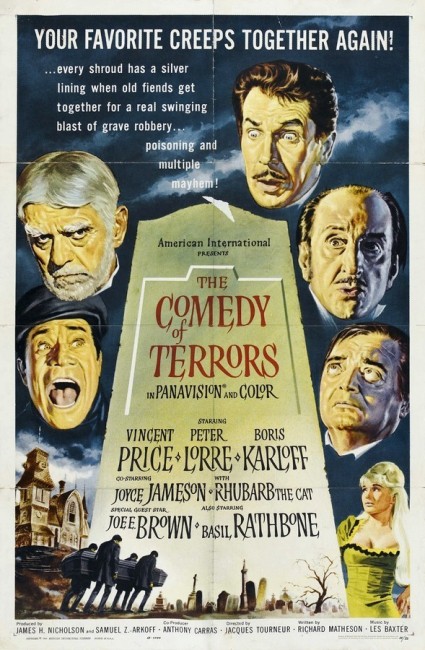 Alcoholic wife-beater Waldo Trumbull has run the funeral business he inherited from his father-in-law into the ground. His landlord John F. Black threatens to foreclose unless Trumbull comes up with a year’s unpaid rent. And so Trumbull and his assistant Felix Gillie decide to resort to murder in order to drum up some business. When the wife of their first victim leaves town without paying their bill, they decide they can kill two birds with one stone by making Black into their next victim.

The Comedy of Terrors was not one of Roger Corman’s Edgar Allan Poe films but has enough in common that it could easily have been. It has more or less the same credits as Corman’s comedic Poe effort The Raven (1963), including stars Boris Karloff, Peter Lorre and Vincent Price – who is playing essentially the same part that Lorre did in the similarly comedic The Black Cat episode of Corman’s Tales of Terror (1962), screenwriter Richard Matheson, production designer Daniel Haller, musician Les Baxter and photographer Floyd Crosby.

The Comedy of Terrors was directed by Jacques Tourneur, who a couple of decades earlier had made distinction with two of Val Lewton’s finest psychological horror films Cat People (1942) and I Walked with a Zombie (1943). Here Tourneur is in broad burlesque mode and the film is aimed at a frequently buffoonish level of knockabout comedy. What saves The Comedy of Terrors from total silliness is a witty and adept script from Richard Matheson who wrote most of Roger Corman’s Edgar Allan Poe films.

All the cast are on fine form – Vincent Price is in full fruity flight with some hilarious scenes threatening to poison Boris Karloff off, while Peter Lorre does his craven cringing thing with equally hilarious regard. There are some mercilessly funny scenes with Vincent Price and Peter Lorre trying to force Basil Rathbone to stay in his coffin. The film reaches an especially hilarious ending with Basil Rathbone maniacally quoting Shakespeare, everybody being killed off (sometimes multiply so) and an especially droll final scene where Boris Karloff feeds Vincent Price some ‘medicine’.