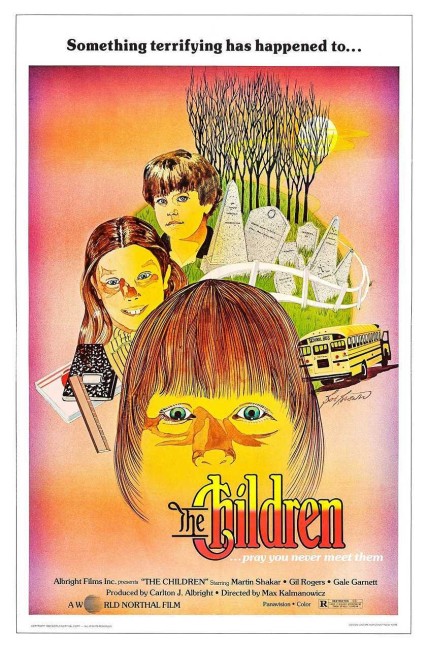 In the town of Ravensback, a school bus of children is returning home when they pass through a radioactive cloud that has leaked from the nearby nuclear power plant. Sheriff Billy Hart becomes concerned after he comes across the empty bus on the roadside and nothing can be found of the children. As Billy sets up a search, the children start to reappear but have been changed. Their nails are all blackened and they are driven to draw their parents into a deadly hug that burns them to death. Billy and others take siege, trying to fight off the zombified children, which prove to be unable to be killed by any regular means.

The Children is one of the undeniable children of George A. Romero’s Night of the Living Dead (1968), the influential and ground-breaking zombie film that cast a shadow over 1970s independent horror. By the time that The Children was made, there was also the influence of Romero’s sequel Dawn of the Dead (1978) as well. The film could well also have been intended as a riff on the fad for evil children that we had during the 1970s with popular hits like The Exorcist (1973) and The Omen (1976). You could maybe see The Children as a 70s evil child film as filtered through Romero’s zombie films.

The Children was never intended as anything more than a throwaway effort for drive-in audiences, where it was apparently a reasonable hit. (In more recent years, the dvd distribution rights were picked up by Troma). Much of the film is based around the provision of entertainingly cheesy and preposterous meltdown effects every few minutes. The film never seems to have anything more to it than this – children wearing black fingernail polish come up and hug adults, which sets them on fire and causes them to melt down.

Once director Max Kalmanowicz gets the principal characters holed up in the farmhouse, he produces a mild degree of atmosphere, but the film is certainly a good deal more slow moving than any other Romero copy of this period. Nor does it ever seem to play off the strong potential of the subversion of parental affection that seems to loom over the film with much rich metaphoric potential.

Everything only plays out in a pedestrian, rudimentary way and The Children is too dull and not bizarre enough to be the cult film it clearly has potential to be. There is also a bizarre arbitrariness to the set-up – how the script just decides for no particular reason that chopping off the children’s hands is the way to despatch them as though it was looking for some alternative to Romero’s idea of shooting zombies in the head.

Nobody attached to the film ever seemed to do anything again. Max Kalmanowicz made one other film with the obscure astral projection effort Dreams Come True (1984). Screenwriter Carlton J. Albright went onto direct Luther the Geek (1990). The cast are all unknown and deliver some bizarre performances, most notably from Gil Rogers who plays with a bug-eyed expression as the sheriff.

The Children should not be confused with or is related to The Children (2008), a fine British-made film in which children murderously turn against adults.