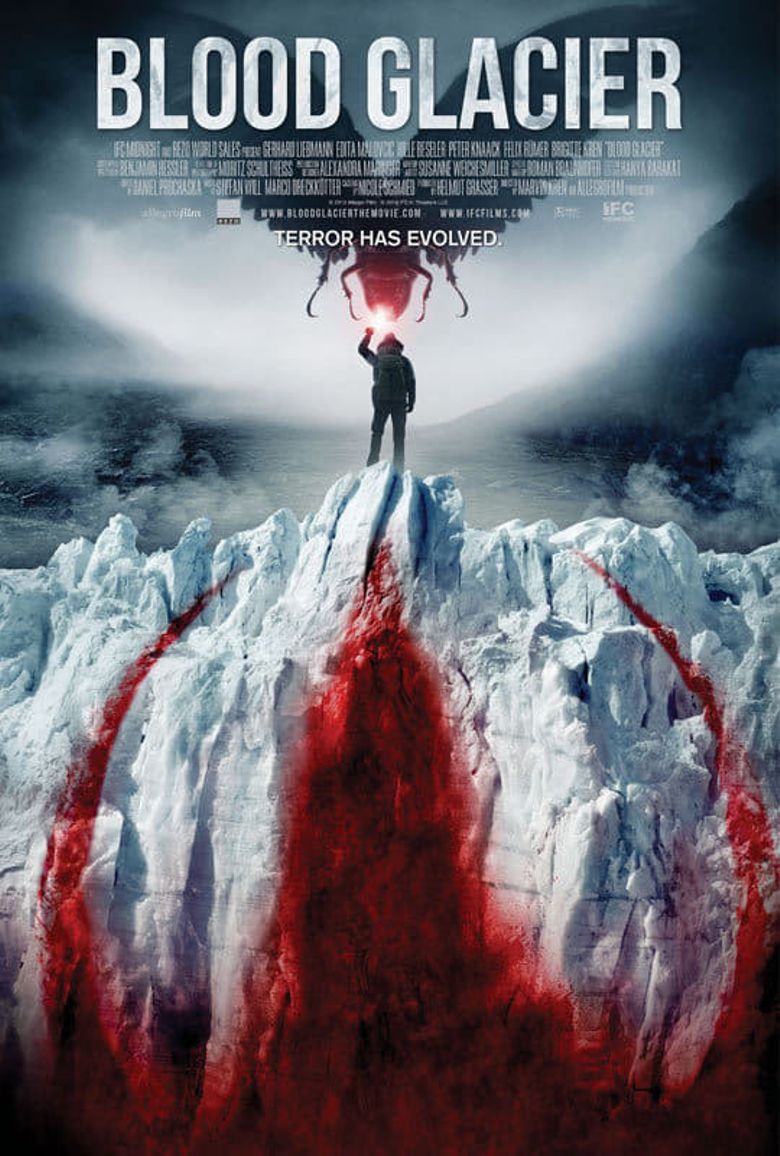 A geological team are stationed at a remote base on an Austrian glacier. The mountain guide Janek discovers a new cave that has stained an entire side of the glacier the colour of blood. His dog Tanni ventures into the cave and is bitten by what Janek thinks is a fox. Scientific examination back at base reveals that this is a prehistoric creature that has the ability to nest inside its host, creating a mutation that melds the DNA of both. They are then attacked by a giant flying mutant insect. As the Minister for the Environment and her team, which includes Janek’s ex Tanja among the party, visit the outpost, they come under attack by the ferocious beasts spawned by the glacier, as well as the ones that have infected members of the party.

Austrian director Marvin Kren is clearly an emerging new horror name. Kren first appeared with the German-made zombie film Rammbock (2010). Blood Glacier is his second film and gained a high enough profile that it was selected for the 2013 Toronto International Film Festival, followed by a small theatrical release in the US in 2014. Marvin Kren next went onto make the R is for Roulette segment of ABCs of Death 2 (2014).

Blood Glacier comes with a reasonable word of mouth. With this in mind, it takes a long time for the film to settle in as we sit through the mundane stuff among the group in the research station and Gerhard Liebmann’s reactions to news of his ex Edita Malovcic coming to join them. The sort of not terribly interesting time filler where you wish the filmmakers would get on with it or at least punctuate it with something to perk the interest up. With the introduction of the infection/mutant creatures from the cave in the glacier, Blood Glacier seems to be heading in the general direction of the standard Alien (1979)-inspired monster movie. That and more than a few dashes taken from The Thing from Another World (1951) and The Thing (1982) of a small team isolated in a remote snowbound location facing off against a monster.

Blood Glacier is mounted with a sufficient seriousness and belief in itself that you expect it is going to do something original with the genre elements. However, there comes the point where the silliness of what we see before us collapses into a glorified B movie – maybe around the scene where Hille Beseler does a blackboard diagram to explain the notion of cross-species miscegenation of DNA and people then start talking about mutants. This is not helped by the absurdity of the main creature that is attacking them, which looks like a combination of a giant insect and a goat. You suspect that the reason that it is kept hidden or in half-light most of the time is that if audiences were to see it they would break into laughter.

Certainly, in the attack scenes and especially some of the gore-drenched scenes like where the sac is removed from Coco Huemer’s leg or flies come out of Michael Fuith head, Blood Glacier delivers what we expect of it. Here Blood Glacier becomes the modern equivalent of a cheesy makeup effects horror of the 1980s – something like The Kindred (1986) or Blue Monkey (1987) might be a comparable example. On the other hand, you keep expecting all of this to mount to something amazing, or at the very least a gruelling to-the-last-man siege. Alas, the film finishes unsatisfyingly, feeling like it almost travels there but only succeeds in going part of the way.