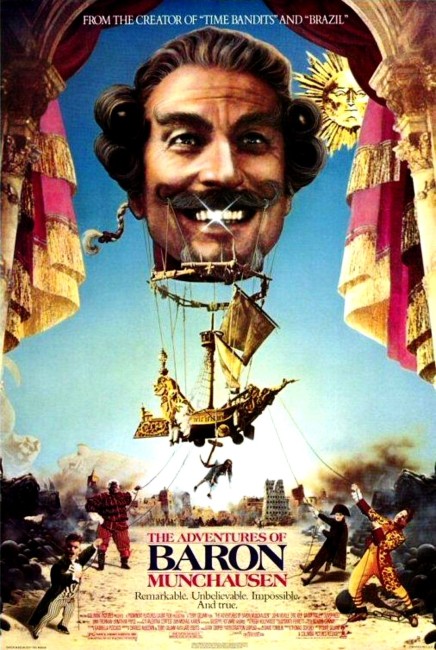 At the end of the 18th Century, while in a city under siege from Turkish hordes, a theatrical troupe put on a play based on the extravagant exploits of Baron Munchausen. An old man who claims to be the real Baron Munchausen then invades the theatre. He takes it upon himself to rescue the ladies of the troupe from the Turks. Accompanied by young Sally Salt, he sets forth in a balloon made from the actress’s knickers to reunite his three companions. It is an adventure that takes the Baron to the Moon inhabited by giants whose heads sometimes fly off independent of their bodies, down to the lair of the god Vulcan where Munchausen seduces Vulcan’s wife Venus, and into the belly of a whale.

Baron Munchausen, or to use him his real name, Karl Friederich Hieronymous Von Munchausen, was an actual historic figure. Born in Bodenwerder, Germany in 1720, died 1797, Munchausen spent most of his life in the army. In the officer’s mess, he began to concoct fanciful accounts of his exploits. These were later collected and published as Baron Munchausen’s Narrative of His Marvellous Travels and Campaigns in Russia (1795) by his friend Rudolf Erich Raspe, something that Munchausen was never pleased with, even though the book proved immensely popular. The material always proved lucrative to filmmakers – fantasy pioneer Georges Melies made a version The Adventures of Baron Munchausen (1911); there was a British version in 1927; Münchhausen (1943), an opulent colour production financed by the Nazis; Baron Munchausen (1962), a part-live, part-animated version by Czech Karel Zeman; The Fabulous Adventures of Baron Munchausen (1977), a French-made animated children’s film; and subsequently Baron Münchhausen (2012), a German tv mini-series.

This version comes from former Monty Python member Terry Gilliam. Gilliam had been responsible for the animated cut-outs on the tv series Monty Python’s Flying Circus (1969-74) and co-directed the first Python film Monty Python and the Holy Grail (1975). Gilliam became a solo director with Jabberwocky (1977), gained commercial success with Time Bandits (1981) and critical acclaim with Brazil (1985). Subsequently, Terry Gilliam went onto make a number of genre films with The Fisher King (1991), Twelve Monkeys (1995), Fear and Loathing in Las Vegas (1998), The Brothers Grimm (2005), Tideland (2005), The Imaginarium of Doctor Parnassus (2009), The Zero Theorem (2013) and The Man Who Killed Don Quixote (2018).

The Adventures of Baron Munchausen was a deeply troubled production – the problems involved in shooting internationally pushed the budget up from 25 to 40 million dollars, nearly had Terry Gilliam fired and forced the dumping of substantial sections of script in an attempt to bring the spiralling budget down. Even when released, The Adventures of Baron Munchausen earned little of its cost back and once featured prominently on a list of the biggest financial flops in Hollywood history.

Despite all of these troubles, The Adventures of Baron Munchausen comes with surprising consistency. It is opulent and grandiose as it sweeps wildly through both the poetic and the absurd. Like Gilliam’s Brazil before it, it is an out of control film, often becoming buried in effects, but Terry Gilliam never loses sight of the Baron’s unflappable certainty throughout. John Neville (who physically resembles the Baron in Gustave Doré’s illustrations for the original versions of the Raspe stories) gives a wonderful performance of fruity courtliness and ramshackle nobility. The rest of the cast are fine – except for an unbilled, overacting Robin Williams – especially a young Sarah Polley who gives one of the best child performances in ages and Oliver Reed who has rarely been better as the puppydoggish Vulcan.

The technical side has a dazzlingly eccentric inventiveness – the Earth seen from space becomes a meridian globe, the Moon literally a crescent (which the Baron affects escape from by hooking a rope over the tip of and then climbing down) and the stars astrolabe charts; or the Baron’s sweeping Venus up into a mid-air dance that is suddenly joined by cherubim winding them in lengths of silk. There are also all the classical elements of the Munchausen story such as the Baron being tossed across a battlefield on the end of a cannonball and the journey into the belly of the whale.

One of the surprising aspects about the film is that Terry Gilliam appears to have taken his interpretation far more from the Nazi version Münchhausen than he ever did from Rudoplf Erich Raspe’s tales. Many of the individual episodes – the journey to the Moon, the meeting with the Sultan and Adolphus’s race to Vienna and back – have been recreated almost direct from the 1943 film but have no equivalent in the Raspe book. Gilliam denies this, although could simply be his not wanting to be seen to be taken Nazi inspiration. There are also claims made that he was directly inspired to make this version after seeing the 1962 Karel Zeman version, which is the best film of the Baron Munchausen story to date.

What makes The Adventures of Baron Munchausen considerably more interesting than the average fantasy film – and tends to derail it at times – is the characteristic Gilliam-esque dark undercurrent of pessimism. An ever-present Angel of Death hangs in wait over the film and the Baron frequently surrenders to hopelessness throughout his quest. By the end, both this and the flip-flop shock endings with revelations of stories within stories and the casting of the Baron into the more mundane role of a deluded fabulist after all, bring the opulent heights down to earth with a considerable bump. Even if the film does end on a upward note, the nastier aspects – the jokily macabre, uneasily funny pieces with the blind executioner and a torture symphony – work to make The Adventures of Baron Munchausen seem a schizoid fantasy that is often working against itself to bleaker, blacker ends.

Although John Neville bears a striking resemblance to the Munchausen in the original Gustave Dore illustrations of the book, this version goes to inexplicable lengths to avoid both the historical figure and even any mention of the ‘world’s greatest liar’ label. In de-emphasising Munchausen’s tall tale aspect, this has the effect of making Munchausen merely another figure in a wildly scaled absurdist fantasy.