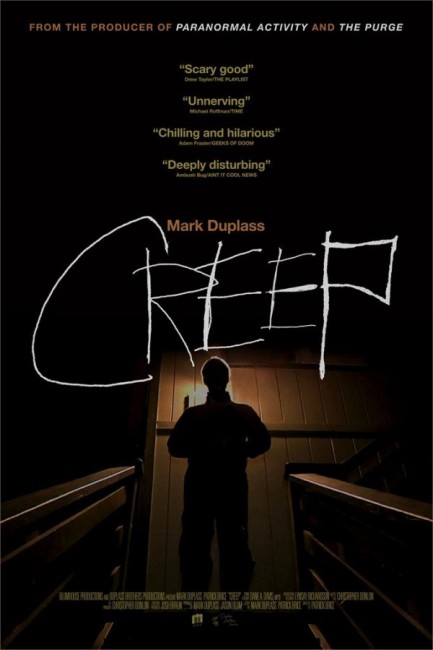 Aaron Franklin is hired by Josef to come to his cabin in Crestview and shoot a video. Aaron travels up to the cabin where Josef explains that he has a terminal brain tumour and is wanting to make a video as a legacy for his son before he dies. Josef insists that he and Josef will be best friends. As the shoot gets underway, Aaron starts to find Josef’s behaviour stranger, including being certain that Josef has taken his car keys. He then picks up a phone call from the woman Josef claims is his wife who tells him that nothing that Josef says is true and urges him to get out. Back home in the weeks after this, Aaron is stalked by Josef who keeps sending increasingly more sinister gifts.

Patrick Brice, the credited director on Creep, is a friend of Mark Duplass and the two conceived the film, shot it and appear on screen together. Brice subsequently went on to direct the non-genre The Overnight (2015) and the horror film Corporate Animals (2019).

Creep has essentially been filmed as an improvisational project between two friends. The film starts out with Patrick Brice’s Aaron hired ostensibly to film Mark Duplass’s Josef for his memorial video. There are a few scenes at the very start where Patrick turns the camera on himself but mostly the film is about the two interacting. The camera is frequently passed back and forth between them as they converse or else sits to the side observing what is going on.

The film was made with Duplass and Brice essentially improvising the dialogue between themselves. To this extent, there is no screenplay credit and the film only credits the two of them for story. Apparently, the film was not even a horror work until it came to the editing phase and the two showed footage to people who suggested it would work much better as a horror film. (All of which makes me intrigued as to what the two of them were improvising the rest of the time – this is a film where a Making Of special and series of deleted scenes would be fascinating). It was picked up for release by the near-ubiquitous Blumhouse.

Things are entirely spun on their head in the scene where Duplass passes out drunk and Brice answers a phone call from Duplass’s wife where [PLOT SPOILERS] we learn that almost everything that Duplass has said – about having a tumour, a son, that she is his wife, that where they are is his house – is untrue, followed by her urgings “whatever you’re doing, run, get out of there.” Exactly what happens next and how Brice gets away is not clear. The film abruptly segues to several weeks later back at Brice’s place as he starts receiving gifts from a very stalkerish Duplass before a rather chill ending.

Mark Duplass and Patrick Brice returned with a sequel Creep 2 (2017) about Josef preying on a different videographer. A third film has been promised,