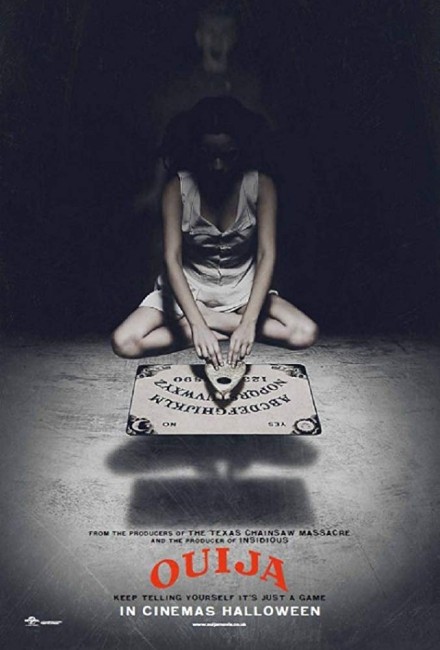 Laine Morris goes to see her best friend Debbie Galardi but is brushed off. Back inside her house, Debbie starts playing with an ouija board but is driven to hang herself. In the aftermath, Laine is haunted by not knowing why Debbie killed herself. She persuades her sister and three other friends to conduct a seance, using the ouija board to try and contact Debbie. They are successful but then spooky things begin happening around the house. The next day all of them receive messages saying ‘Hi Friend’, the phrase that was communicated through the ouija board. Laine realised they have opened the way not to Debbie but a far more malevolent spirit that used to live in the house and is now intent on killing each of them one by one.

Ouija is co-production between Michael Bay’s Platinum Dunes production company and Blumhouse, the production company headed by Jason Blum. Platinum Dunes has been responsible for the remakes of The Texas Chainsaw Massacre (2003), The Amityville Horror (2005), The Hitcher (2007), Friday the 13th (2009), A Nightmare on Elm Street (2010) and Teenage Mutant Ninja Turtles (2014), as well as original works like Horsemen (2009), The Unborn (2009), Ouija (2014), Project Almanac (2015), A Quiet Place (2018) andSongbird (2020) the tv series The Last Ship (2014-8). Blum has become a prominent name in genre material in recent years with the likes of the Paranormal Activity sequels, Insidious (2010), Sinister (2012) and numerous others. (See below for Blumhouses other works). Bay first paired with Jason Blum of Blumhouse on the surprise hit of The Purge (2013).

Ouija is directed, co-written and produced by Stiles White and Juliet Snowden. It is a directorial debut for White who has a career back into the 1990s as a production assistant at the Stan Winston Studio. Teaming with Snowden, the two of them accrued some reasonably high-profile horror credits with the screenplays for Boogeyman (2005), Knowing (2009) and The Possession (2012).

The ouija board (whether you pronounce it as ‘wee-jah’ as I grew up doing or else as ‘wee-gee’ as characters on the North American continent and in the film do) has had a sporadic interest on film in efforts such as The Uninvited (1944), 13 Ghosts (1960), The Exorcist (1973), Witchboard (1986), Is Anybody There? (2002), Long Time Dead (2002), Greetings (2007), The Unleashed (2011) and others. The problem for many of these films is that the ouija board is actually a trademarked name that was first patented in 1890 by American lawyer Elijah Bond. Parker Brothers bought the patent and marketed the ouija board as a children’s toy since 1966, while this was taken over in 1991 by Hasbro. Such a mundane origin does seem amusing given the hysteria that surrounds the claims about the occultic power of ouija boards and that they are gateways to demonic forces that we get from Christian fundamentalist circles. The name ‘ouija’ is believed to be a concatenation of the French and German words for yes.

Most of Platinum Dunes’ ventures into horror have been reasonable box-office successes but have been unexceptional. Crucially, they have failed to set the world alight when it comes to horror, unless you want to count The Texas Chainsaw Massacre sparking off the unwelcome late 00s trend of remaking 1970s/80s horror film, of which Platinum Dunes became the most high-profile proponent. On the other hand, Jason Blum has shown himself as a producer with smarts and has been behind some above-average films so it was a question of which way Ouija would fall.

True to Platinum Dunes form, there is something utterly generic about Ouija. Much of the plot feels like it has been slung together by constructor set. The teens – all unknown names except for the rising British actress Olivia Cooke who has been accruing some reasonable genre credits in the last couple of years with the likes of tv’s The Secret of Crickley Hall (2012) and Bates Motel (2013-7) and the films The Quiet Ones (2014) and The Signal (2014) – have no more character depth to them than names. The story follows standard tropes involving setting something malevolent loose, which then proceeds to go through the standard Teens in Peril set-up eliminating them one by one.

On the other hand, you cannot deny that Stiles White creates something undeniably spooky at times. When you get past the irritating red herring jumps where a loud amplified noise is often used to jolt an audience when someone unexpectedly appears in a room or out of a corner, there is something effective to the film – like from about the point of the seance in the darkened house with the chair moving and where Olivia Cooke looks through the planchette lens and sees the ghost of the girl lunging towards her screaming “she’s coming”, followed by the appearance of the mother. Other scenes with spooky figures appearing in the background, in pedestrian tunnels, shadows in the attic, eerie scenes with Bianca Santos being levitated in her bathroom and so on are all commendable horror mechanics and show that Stiles White has studied his material.

If all of this had come with a less generic script, Ouija could have had the makings of an impressive little film. As it is, we feel like we are getting Insidious Lite. The latter third of the show abandons the spooky build-up and degenerates into too much in the way of pop-up effects. The otherwise generic script is also badly hobbled by an implausible twist mid-film where apparently [PLOT SPOILERS] the ghosts and the living have conspired to conduct a scam on the teens who ventured into the house, of course knowing in advance that they would use the ouija board.